A Crisis At the Border: Is Joe Biden Really To Blame? 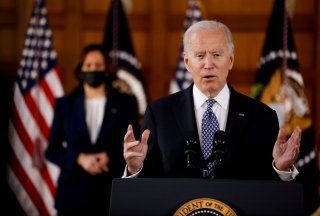 Former President Donald Trump blasted President Joe Biden and his administration for the ongoing crisis at the southern border, pushing his successor to finish building the U.S.-Mexico border wall, as Biden’s team led the situation “into a national disaster.”

In a statement released Sunday, Trump argued that his administration “handed the Biden Administration the most secure border in history.”

“All they had to do was keep this smooth-running system on autopilot. Instead, in the span of just a few weeks, the Biden Administration has turned a national triumph into a national disaster. They are in way over their heads and taking on water fast,” Trump added.

The remarks come after Homeland Security Secretary Alejandro Mayorkas took a media blitz over the weekend to defend the Biden administration’s immigration policy decisions and to redirect the blame of the influx of illegal immigrants at the border toward the splintered system “inherited” from the former president.

“It is taking time and it is difficult because the entire system was dismantled by the prior administration,” Mayorkas told CNN. “There was a system in place that was torn down by the Trump administration.”

Mayorkas said that the border remains “closed,” but noted that the United States will not deport unaccompanied minors.

But Trump fired back at Mayorkas for media appearances on Sunday, calling them a “national disgrace.” The former president dubbed the homeland security secretary as “pathetic,” “clueless,” “self-satisfied” and “incapable of leading” the department and demanded an “an immediate congressional investigation” over the “gag order on our Nation’s heroic border agents and ICE officers.”

“It’s clear they are engaged in a huge cover-up to hide just how bad things truly are. The only way to end the Biden Border Crisis is for them to admit their total failure and adopt the profoundly effective, proven Trump policies,” Trump said, adding that the border wall must be built.

Although the number of migrant children at the southern border has reached more than fifteen thousand, according to CBS News, experts say that the immigration and asylum systems were shattered even before Trump’s White House term.

“Arrests at the southern border have risen for months, including an explosion starting in January 2021. Human smugglers (also known as coyotes) are using the promise of a new U.S. administration to lure migrants on the long, dangerous journey. The truth is that the U.S. immigration and asylum systems were beyond broken well before the Trump administration,” Ryan C. Berg, a research fellow at the American Enterprise Institute, said in an email interview.

Berg added, “Both are in desperate need of reform. The Biden administration is trying to do the impossible—simultaneously break down the Trump administration's architecture while also sending a strong deterrent message that now is not the time to come. There are mixed signals here, and migrants are picking up on this under the assumption that a change in U.S. administration means an immediate change in policy.”

GOP lawmakers, however, have lined up behind the former president’s recent comments, including Sen. Tom Cotton (R-Ark.), who claimed the border is “wide open.”

In an interview on “Fox News Sunday,” Cotton said that the Biden administration effectively ruined secure policies at the southern border, calling on the president to revive Trump’s immigration policies. The senator went on to slam Mayorkas for standing by Biden’s policy of not barring unaccompanied minors approaching the border.

“He’s basically saying the United States will not secure our border and that is a big welcome sign to migrants from across the world,” Cotton said.

But both Biden and Mayorkas have repeatedly told migrants to not pursue entry into the United States, as his administration navigates the overwhelming rush at the border.

“In the long-term, the U.S. must help Central American countries to reduce barbarous levels of violence, wrest control of large swaths of territory by criminal gangs, reform poor governance, and root out systemic corruption that drives migrants north,” Berg said.

The Shocking Truth: A Trump Presidency Could Be Good for ANZUS