Crisis Not Averted: Why the Rift Between Gulf Countries Endangers America's Security 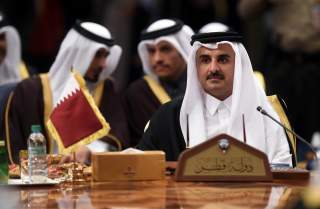 Qatar is often accused of operating a sloppy and inconsistent, even contradictory, foreign policy, but occasionally it proves fairly deft in brokering progressive diplomatic talks and intermittently achieves breakthroughs. Pulling off such a complex set of moves on the regional chess board is no simple task, but Qatar more than likely is capable of engineering some sort of measurable progress toward a resolution of the crisis in Yemen; it would be particularly timely with the death of former strongman Saleh. Such a move—including persuading the Houthis to turn into a political party/movement—would help calm tensions, and likely engender a positive response from the rest of the GCC in kind.

Kuwait has continued trying to broker a compromise proposed at the GCC summit it hosted, but the other key to finding a resolution to this highly unnecessary crisis is for the United States to put heavy pressure on all parties involved. The U.S. special envoy for Middle East peace, former Central Command commander Anthony Zinni, needs to be empowered by the president and secretary of state. On top of that, what is now required is the full-throated and unstinting support of President Trump, whose own undercutting of Secretary Tillerson may have helped touch off this crisis in the first place.

Dr. Jeffrey A. Stacey is a national-security consultant in Washington. A former State Department official in the Obama Administration, he is the author of Integrating Europe: Informal Politics and Institutional Change. Bassima Al-Ghussein is a former Obama administration legislative affairs advisor, a current political expert with the Truman National Security Project and the C.E.O. of Alghussein Global Strategies.