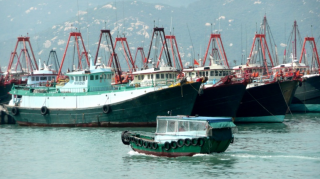 The South China Sea ranks high on any list of the world’s geopolitical hotspots. But though the region has been volatile for centuries, the last two decades have witnessed a subtle shift in the underlying drivers of conflict. Through most of the second half of the twentieth century, the biggest threats to regional stability were claimant states angling to carve out their own slices of the Sea. Today, states continue to covet islands controlled by their neighbors, but none is willing to run a significant risk of war in order to improve its position vis-à-vis the others.

Unfortunately, this good news has been offset by the rise of a different risk factor. Propelled by a combination of waning marine resources and misguided government policies, fishermen are sailing further from their shores and into disputed areas. There, they are increasingly likely to bump prows with either foreign competitors or antagonistic coast guards. The outcome in either case could be disastrous.

Accordingly, Washington has fallen short in its most recent proposal asking states to “freeze” the status quo. Rather than focusing their diplomatic energies exclusively on the behavior of foreign navies, American policy makers should recognize that the next crisis could inadvertently start in the waters between a fishing trawler and a zealous coast-guard cutter.

Past Is Not Prologue

In the last century, states wrote the most important chapters in the South China Sea saga. The script was tense and sometimes even sanguinary: claimants raced to consolidate control over unoccupied islands, and in extreme cases, they attempted to wrest dominion from owners caught off-guard. These policies involved running a serious risk of outright conflict, but it was a gamble that states were willing to take. Hostilities crested in 1988, when Beijing and Hanoi battled over Johnson South Reef. China had trained for the landing extensively, anticipating violence. It got what it expected: after killing over seventy Vietnamese soldiers, China raised its flag over the barren rock.

Today, in contrast, the claimants have shown little appetite for bloodshed. To be sure, each state is trying to shore up its claims through proactive strategies that are, for the most part, premised on a negative-sum approach to the dispute. As a result, the modern-day South China Sea story features high-strung states busy stockpiling arms and playing at war at every available opportunity.

But each nation has more to lose than to gain from a violent confrontation. For China, any military clash—no matter how brief—could torpedo the permissive international environment that has assisted its rapid economic rise. And in an era where growth is tapering, Beijing would suffer massive reputational costs from a conflict—costs that might imperil its future prosperity and expansion by pushing its neighbors into the arms of China’s strategic rival: the United States.

The other claimants have even more to lose from a violent confrontation. Protracted infighting would undermine the united front necessary to effectively oppose the real threat to their claims: Chinese encroachment. And if they tangled directly with China, then these other states would almost certainly experience a quick and humiliating military defeat. Even as China was capsizing their navies, it would also be playing havoc with their economies. And on top of military losses and economic sanctions, these other claimants would also likely suffer strategic setbacks as they surrendered hard-earned “ground” in the South China Sea. This dismal calculus might come out differently if these nations could assure themselves of American involvement, but no state is willing to rely entirely on the promise of American assistance.

Accordingly, no state wants to pick a fight in the South China Sea. This may change in a few years: Chinese policy makers may move from an assertive grand strategy to an aggressive one, or a smaller player may reach new levels of desperation. But at least for now, any crisis is unlikely to be state-engineered.

Down in the Trenches

Unfortunately, though, violence remains an ever-present possibility. When states face off in the South China Sea, they know that they can push the envelope only so far. But most encounters in the Sea do not occur at the state-to-state level; instead, they involve nonstate actors. Every day, fishermen from different nations cross paths with each other and with a variety of irascible maritime law-enforcement agencies. These interactions are laced with friction, and experience shows that it takes only one errant fishing captain to set off an explosive crisis.

The standoff over Scarborough Shoal exemplifies this dynamic. In April 2012, Manila caught eight Chinese fishermen “trespassing” in Philippine waters. Tensions escalated when each claimant decided to signal its determination to hold on to the Shoal. It is easy to imagine a repeat scenario that is resolved less peacefully—perhaps because this time, the Philippines refuses to be tricked into backing down.

Of course, states are incentivized to prevent these types of incidents from spiraling out of control. But fishermen are finicky and unpredictable foot soldiers, especially when they sail against the backdrop of nationalism and posturing that characterizes state-level relations in the South China Sea. Having assiduously fostered nationalism for their own ends, states can no longer guarantee that any given microcrisis will not take on symbolic meaning that makes peaceful resolution almost impossible to achieve. Even if a state wants to avoid war ex ante, its hands may be tied once the public learns of the death or humiliation of their fellow countrymen.

In the past, violence in the South China Sea was orchestrated from capitals far away. Today, though, a confrontation is far more likely to erupt unexpectedly on the frontlines, and these frontlines are multiplying across the breadth of the Sea. More than ever before, fishermen and coast guards from different states are motivated to venture deep into the heart of disputed areas, even as they have simultaneously acquired the capability to leave their shores far behind.

Neighboring states have always been incentivized to conduct a stream of “show the flag” operations in contested areas in order to solidify their claims of sovereignty. But recently, scholars like Zhang Hongzhou have explained how the Sea’s disputed areas are increasingly attracting a new breed of partisan contestants: the fishing fleets of claimant states and the coast guards that follow in their wake.

Fishermen have been driven to set out for disputed areas by the economics of their profession. In the last several decades, the demand for fish has skyrocketed among regional consumers. In 2010, the Chinese ate five times as much fish as they had only forty years earlier. This trend and others like it show no signs of stopping; as economic growth continues, the region will hunger for more and more seafood. Regional fishing industries have also been stimulated by rising demand for other marine products, including corals and giant clams. And this domestic demand has been matched by soaring consumption abroad, with China now claiming the world’s biggest seafood processing and exporting industry.

The countries of the South China Sea have not been able to meet this explosion of demand through inshore fishing alone. After years of exploitation that devastated fishing stocks near the claimants’ coasts, fishermen must go farther and farther offshore in search of their prey. The statistics are telling. From 1985 to 2002, China more than tripled the percentage of its total catch coming from offshore waters—jumping from 10 percent to 35 percent. That number has continued to grow over the last decade.

As they pursue the fish farther offshore, these fleets are increasingly treading on the geopolitical fault lines of the South China Sea. There, they encounter nationalistic counterparts and hostile coast guards eager to expel them by all means necessary, including force. These interactions are ripe with the potential for sparking a wider conflagration, and they seem to be happening with greater frequency. For that reason, it is no surprise that observers have counted a rising number of maritime incidents involving fishermen.

Fishermen have been additionally incentivized to “go out” through national policies. For instance, China has instituted seasonal fishing bans in its inshore waters in order to help its fishing stocks recover. Thanks to the way that these bans are drawn, though, they encourage Chinese fishermen to head to the contested Spratly Islands instead.

Beijing has also indirectly incentivized fishing in distant areas by subsidizing fuel and navigational equipment, both of which are particularly valuable for long-distance trips like those necessary for visits to the disputed Paracel and Spratly Islands. Subsidized navigational equipment prompts offshore fishing in another way as well: by allowing fishermen to call Chinese authorities for help in emergencies, the equipment ensures the fishermen’s safety in encounters with foreign coast guards and thereby emboldens them to stray farther into contested waters. And as the recent oil-rig spat between China and Vietnam demonstrates, South China Sea states have even consciously deployed their national fishing fleets as political instruments in an attempt at “fishing pole” diplomacy during extreme situations.