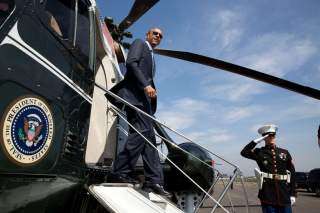 “It is my strong belief that if we engage, that that offers the greatest prospect for escaping some of the constraints of the past. I think the Cuban people are extraordinary and have huge potential. And what’s encouraging is, is that the overwhelming majority of Cubans are interested in ending . . . the last vestige of the Cold War—and moving forward.”

If there is such a thing as a Barack Obama worldview—a statement of purpose that encapsulates what drives his foreign policy—it is certainly reflected in this declaration given at a “town-hall” meeting in the Jamaican capital on his way to meet with Cuba’s dictator Raul Castro. The historic meeting—and that oft-used, though morally neutral, cliché can indeed be employed here—took place in Panama on April 11 at the Summit of the Americas.

There, Barack Obama and the dictator he deferentially refers to as “president” sat and talked for about an hour. As President Obama repeated a version of the apologies he nearly always offers while meeting with foreign despots abroad—the Panama City version being “I’m certainly mindful that there are dark chapters in our history”—Cuban government henchmen were beating up Cuban dissidents and their American supporters, calling them “worms” and “mercenaries,” thereby exporting to Panama the level of oppression they have practiced with impunity on the island for decades.

Then two days after the President’s return, on Tuesday April 14, the White House announced what everyone expected: President Obama will take Cuba off the list of state sponsors of terrorism. This was one of Castro’s preconditions to setting up diplomatic relations. Castro’s assuming that he can set preconditions on the world’s sole superpower has been proven valid by the fact that we meet them.

This, despite the fact that, speaking at the summit, Castro openly acknowledged that his regime has indeed consorted with terrorists and issued a veiled threat that this would continue until his tyranny is legitimized. “Yes, we have conducted solidarity with other peoples that could be considered terrorism,” our new man in Havana said. “When we were cornered, when we were harassed, we had no other choice but to give up or to fight back.”

As former State Department official Jose Cardenas put it in a tweet, the Panama summit has shaped up to be “the Castro Lobby’s Superbowl, World Cup and World Series all rolled into one.”

The administration’s foreign policies have dramatically destabilized the Middle East. Now Obama is bringing those failed policies to this Hemisphere. Suddenly, we are getting in bed with our worst adversaries—both philosophical and actual—while taking to task long-term friends who share our values.

To call it a doctrine would be to take it too far, as it would imply a level of rigorousness that clearly is missing. It is more a frame of mind, or if you want to borrow a foreign word, a weltanschauung. Let’s parse the three components of this creed one by one.

#1: “It is my strong belief that if we engage, that that offers the greatest prospect for escaping some of the constraints of the past.”

This does require belief—as in “a leap of faith”—since previous experience would certainly convince an objective observer of the opposite. If the nineteenth-century British statesman Lord Palmerston was right that states do not have friends, but only interests, then it follows that no amount of currying friendship would sway governments from the cold pursuit of their interests.

This is doubly the case with absolutists, such as Castro, for whom relaxing his grip on the captive population he and his brother have dictated to for fifty-seven years would pose an existential threat. The Obama gambit requires believing, for example, that “engaging” Philip II at his cloistered study at the Escorial palace would have made him less likely to suppress the Dutch, intervene against the Huguenots, attempt to invade England or inflict the Inquisition on his own people. It is highly unlikely, too, that appeasing Napoleon would have turned him away from his dream of dominating Europe and beyond.

The twentieth century was in many ways a tragedy whose central moral lesson was that appeasement is unrequited love played out on an epic scale. The most famous examples, of course, were the concessions made to Hitler, which only fed his lust for more and more lebensraum. But there was also Stalin, whose friendly terms with Franklin Roosevelt didn’t certainly prevent him from drawing an Iron Curtain across the middle of Europe. No amount of engagement with “Uncle Joe” prevented him from having his way with peoples between the curtain all the way to the Pacific, where millions perished and those who survived lived in fear.

Much closer to the present, Mr. Obama’s own experience in a short six years is a testament to the inefficacy of conciliating dictators. His infamous “reset” policy with Vladimir Putin has not dissuaded the Russian autocrat from destabilizing his neighbors. Secretary of State Hillary Clinton’s de-emphasizing of human rights with China has only emboldened the Communist Party leaders in Beijing. In Burma—that other success of engagement with despots—those close to opposition leader Aung San Suu Kyi tell me she privately complains that recognition of Rangoon’s military junta has been a grave mistake that is preventing, not encouraging, a transition to democracy.

And so it is already with the Castro regime, whose appeasement dates back only to December 17. In the three months since President Obama informed the world that he knew better than ten of his predecessors how to bring freedom to Cuba, the Castros have only tightened their fist further. The Wall Street Journal reports that there were 178 political detentions in January, 492 in February and 610 in March. (At that level of compounded growth, the entire population of the island would be detained in a few years, though of course wags would point out they already are.) The beating of dissidents in the streets of Panama City while President Obama met with their tormentor in air-conditioned rooms at the Summit of the Americas offers further proof that Castro and his affiliates are not in the least bit interested in “escaping the constraints of their past”—other than to be able to consort with naïve or morally challenged American politicians and businessmen.

As for foreign relations, Cuba’s communists have been caught in illicit weapons transfers with Asian communists twice in the past two years—the last one being after the December 17 speech by Mr. Obama that announced his desire to normalize relations with Cuba. On February 28, Colombian authorities intercepted the Chinese-flagged Da Dan Xia in the Caribbean port of Cartagena. It was carrying 100 tons of gunpowder, 2.6 million detonators, 3,000 artillery shells and 99 missile heads—all labeled as “grain shipment.” The affair has been kept hushed up both by the Colombian government, which is busily attempting its own appeasement of the FARC terrorist group (the talks are taking place in Havana), and by the Obama administration, which seems determined to let no display of obduracy by Castro sway the United States from the path set by Mr. Obama.

The other illicit transfer took place less than two years ago, and it violated a UN resolution. In July, 2013, the North Korean-flagged Chong Chon Gang was captured in Panamanian waters on its way to North Korea from Cuba. It was carrying “six trailers associated with surface-to-air missile systems and 25 shipping containers loaded with two disassembled MiG-21 aircraft, 15 engines for MiG-21 aircraft, components for surface-to-air missile systems, ammunition and miscellaneous arms-related materiel,” according to the website Capitol Hill Cubans, which added that it “constituted the largest amount of arms and related materiel interdicted to or from the Democratic People’s Republic of Korea since the adoption of resolution 1718.” This aborted transfer of weapons took place after the Obama administration had initiated secret talks with Castro’s agents.

Last month, the Spanish newspaper El Mundo reported that in February, the Spanish government demanded that Castro extradite José Ángel Urtiaga Martínez and José Ignacio Etxarte Urbieta, two masterminds of the Basque terrorist group ETA, classified by the State Department as a terrorist organization. Castro has given the Mother Country the back of his hand, proving once again that his regime’s “solidarity with other people that could be considered terrorism” really has little to do with a rat being cornered.

#2:  “I think the Cuban people are extraordinary and have huge potential.”

This is doubtless the case. People inventive enough to keep 1940s and ‘50s Fords and Chevys running today are indeed extraordinary and resourceful. As for their potential, Mr. Obama need look no further than how Americans of Cuban heritage have been able to transform Miami or how they have succeeded across all fifty states. Given the proper economic environment, rule of law and political culture, Cubans in America have demonstrated an uncanny ability to succeed.

But if Mr. Obama has any illusion that he is dealing with the Cuban people, he may need to be reminded that in this case, as in Iran, he is facing an illegitimate government ruling without the consent of the people, as expressed through elections. In Raul Castro, as with the Ayatollahs Rohani and Khamenei, President Obama and Secretary of State John Kerry are shaking hands with leaders of harsh police states who are only in power because a slavish, but ruthless, minority around them has a monopoly on guns, which they use to terrorize the population into submission.