The Cult of Cronyism In the Age of Joe Biden 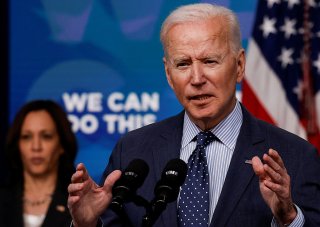 Andrew Lorenzen-Strait opened 2021 as an adviser for the Biden-Harris transition team. On the day President Joe Biden and Vice President Kamala Harris were sworn into office, Lorenzen-Strait also got another job.

On Jan. 20, Texas nonprofit Family Endeavors announced Lorenzen-Strait was its new senior director for migrant services and federal affairs. Within two months, the group scored more than $600 million in federal no-bid contracts from the Department of Homeland Security and the Department of Health and Human Services for housing migrants who illegally crossed the border.

It looks like cronyism of the expensive sort and was curious enough to draw the attention of members of Congress and prompt an investigation by the DHS Office of Inspector General.

No-bid contracts are not the norm, as the federal agencies are supposed to have a competitive bidding process for contracts. Though it’s not unusual to make exceptions in case of an emergency. In this case, admitting to a crisis at the southern border might be the only way for Biden administration officials to explain themselves.

“The Department of Homeland Security Office of the Inspector General is right to launch an investigation into the Biden administration’s suspicious no-bid contract awarded to Endeavors Inc.,” Rep. James Comer (R-Ky.) the ranking member of the House Oversight and Reform Committee said in a statement.

“There are serious concerns about the award process, the nonprofit’s ability to meet the contract needs, and the link to the Biden-Harris transition team,” Comer continued. “The cost of President Biden’s border crisis already burdens American taxpayers and we cannot allow the Biden administration to exploit it to reward political allies with lucrative taxpayer-funded contracts. This is government waste and abuse and must be addressed. I hope this investigation sends a strong message to the Biden administration that taxpayer dollars cannot be misused to line the pockets of political friends.”

The top Republican on the House Homeland Security Committee, Rep. John Katko of New York, noted: “It’s bad enough that this administration has created a self-inflicted border crisis. Its response should now be focused on reversing the misguided policies that got us here – not engaging in activity that raises significant ethical questions.”

This wouldn’t be the first time the Biden administration’s actions on the border stretched beyond a policy snafu and into the realm of the legal or ethical. In March, Senate Republicans asked the Government Accountability Office to investigate whether Biden violated his authority on spending.

A former official with Immigration and Customs Enforcement (ICE) for a decade until 2019, Lorenzen-Strait later ran a consulting firm advising companies on federal procurement before pivoting to Biden’s transition team to advise on homeland security policy that included vetting appointees and housing migrants. From there, it was on to Family Endeavors.

To be clear, Family Endeavors isn’t suspected of doing anything wrong. Started by churches in 1969, the organization doesn’t seem to be particularly political and provides services for veterans and children. The federal officials who were awarding the lucrative contracts are the focus of the federal investigation. Still, Lorenzen-Strait is the connection that caused suspicion of a potential conflict of interest.

When he worked at ICE, Lorenzen-Strait’s immediate boss was Tae Johnson, according to the Examiner. Johnson is now acting ICE director and would have played a big role in the $87 million contract. The Examiner also noted ICE official Claire Trickler-McNulty, who previously worked for Lorenzen-Strait at ICE, had authority over acquisitions and contracts.

The ICE contract was for putting immigrants into up to 1,239 hotel beds for migrant processing in Texas and Arizona. Separately, several House Republicans wrote HHS Secretary Xavier Becerra in April requesting documents and a briefing about the $530 million no-bid contract for housing unaccompanied minors that entered the United States illegally.

“The decision to award a massive, no-bid contract to the nonprofit Endeavors raised many questions including how an organization with no experience working with ICE could win a non-compete contract,” Katko said in his statement.

Perhaps not with ICE, but Family Endeavors is no stranger to government work. Across several federal agencies, the San Antonio-based group has had federal contracts – most of which were more than $1 million, including during the Trump administration. Still, the organization’s 2018 IRS 990 form says the government agencies hired it for a total of $43 million worth of work—far less than it has gotten in the early months of the Biden administration.

So, there are certainly reasons for questions, ones to which the DHS inspector general—and potentially the HHS Office of Inspector General—will eventually provide answers.