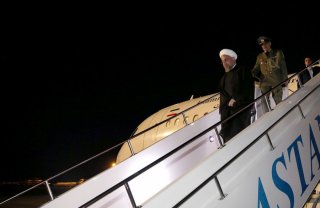 In a recent article on these pages, Alex Vatanka has written that, in lieu of a host of differences, there are stirrings in Tehran (seemingly prompted by President Rouhani’s foreign-policy team) that could lead to a change of policy. Such a thesis will be torpedoed by certain realities of the region. Despite the apparent diplomatic “green shoots” between Iran and Saudi Arabia, these two Persian Gulf petro-powers are not strategically poised for détente any time soon.

In early August, I penned an op-ed with my colleague and co-author David Weinberg where we outlined current and prospective roadblocks to rapprochement. Three major facets will continue to frustrate Iranian and Saudi diplomats looking to ease their existing strategic and ideological competition: preexisting diplomatic history, the Arab Spring with specific reference to Syria and later Iraq, and the admixture of Rouhani’s intentions and the political scene in Tehran.

As a primer, the Saudi-Iranian relationship has been a cantankerous one. The Saudis would be hard pressed to forget the slurs Ayatollah Khomeini, Iran’s revolutionary forefather, frequently hurtled at them: “butlers of America,” “bloodthirsty” and “treacherous.” Nor is it easy to swallow the actions of an aggressive and zealous Iran, which famously sought to “export the revolution,” threatening places like the eastern province of Saudi Arabia, which is mostly Shi’ite, or Bahrain. Iranian officials, for their part, continue to foster a grudge towards the Kingdom due to its massive financial support (along with Kuwait) of Saddam Hussein’s Iraq during the 1980-1988 Iran-Iraq War.  Nonetheless, the bombing of Khobar Towers in 1996, which was linked to Iranian leaders, did little to build trust.  A botched assassination attempt on the Saudi ambassador in 2011 and contentions of Iranian espionage in the Kingdom have also done much to deter détente.

Despite an interlude after the Iran-Iraq War during the Rafsanjani presidency, the modestly enhanced Saudi-Iranian diplomatic relationship never translated into a shared strategic vision for the Persian Gulf. Competing alliances, oil politics, and the question of an American military presence pitted Iran and Saudi against each other in the post–Cold War period.

Today, after the Arab Spring’s toppling of Sunni-Arab leaders by 2012, the Persian Gulf and Muslim Middle East looks more like a Sunni-Shi’ite chessboard than an arena ripe for Saudi-Iranian cooperation. Mr. Vatanka correctly identifies challenges emanating “From Bahrain to Yemen and from Lebanon to the issue of Palestinian reconciliation between Hamas and Fatah” as hurdles. Stability in these countries is not ancillary to Saudi or Iranian narratives. Most of these challenges often have a sectarian component, which inflames, not eliminates, mutual animosity. Indeed, both Saudi Arabia and Iran continue to see the region as a zero-sum game.

Syria is a prime example of this. For the Saudis, the resilience of the Assad regime in Syria, bolstered by Iran’s Islamic Revolutionary Guard Corps Quds-Force (IRGC-QF) and proxy Hezbollah, is a strategic and philosophical affront. For the Islamic Republic, Syria is not only a “chain from Lebanon to here” as former president Rafsanjani opined in 2012, but also, as I have written elsewhere, “a matter of regime survival.”

This brings us to the X-factor in Mr. Vatanka’s piece: Hassan Rouhani. The Iranian president is cast as the man who can bridge these considerable gaps. This is unlikely. First and foremost, Rouhani’s overtures to Saudi Arabia are not novel, as Rouhani is cut from the same conservative-pragmatic cloth as former president Rafsanjani, who did favor closer ties with the Kingdom after the Iran-Iraq War. But if past is prologue in the Middle East, Rouhani will similarly face problems in the implementation of his vision as Iran’s foreign policy.

To be clear, there is no improved “policy consensus” regarding Saudi Arabia. Despite Ayatollah Khamenei’s consistent ecumenical petitions since the Arab Spring (called the “Islamic Awakening” in Persian) to tie the Arab street to Iran’s “axis of resistance,” Iran has firmly supported its Shiite coreligionists for strategic and ideological reasons. Additionally, numerous Persian outlets continue to trumpet sources of varying legitimacy which they allege link the Islamic State (IS, or the acronym DAESH in Persian and Arabic) to Saudi Arabia.

Moreover, Armed Forces Chief of Staff Seyyed Hassan Firouzabadi describes Saudi intentions in the following manner: “The goal of the enemy is breaking [the] revolutionary and resistance-like rule in Iraq and Syria.” Iranian officials such as Hossein Naqavi Hosseini have already asserted that IS “is a joint product of the US, the Zionist regime and Saudi Arabia.” More recently, a political deputy in the Artesh’s (national army) ideological-political bureau openly said that, “[Saudi] Arabia and its allies financially support the terrorist group Daesh.” Amidst these declarations, the Kingdom’s reported “beheading of an Iranian national on charges of drug trafficking” also won’t help smooth things over.

Lastly, the “small steps” that in theory could pave the way for détente do not seem likely to generate sufficient linkage to de-escalate the overall strategic competition between the two states. To date, there is no diplomatic mechanism present for the transfer of any confidence (should it even be built) between Iran and Saudi Arabia. What’s more, a plethora of reasons, such as ideology, political capital, sunk costs and alliance/proxy management, continue to create disincentives for Iran and Saudi to extricate themselves from hostility in numerous regional theatres.

As has become a matter of life and death in the Middle East, Saudi Arabia and Iran are poised to disagree not only over a host of matters governing this life, but also the next.