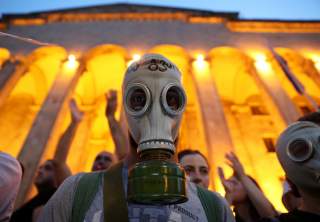 Georgia’s status as a post-Soviet democratic leader is under challenge. A flawed presidential election, use of force against protesters, and political manipulations by the secretive billionaire who heads the ruling Georgian Dream Party have strained public confidence and brought mounting public protests. Domestic calm may hinge on improving political dialogue and conducting free and fair parliamentary elections in fall, 2020.

Independent Georgia has made substantial democratic progress, aided by multiparty elections, robust civil society organizations, and media freedoms. In 2003 the Rose Revolution—a peaceful uprising against political stagnation—accelerated democratic momentum.  Now Georgians may again be tiring of poor governance and lack of transparency. A National Democratic Institute poll last July found that 60 percent of respondents evaluate the performance of the current government as “bad.”

Some hoped the flawed election was an aberrant democratic setback, but perhaps not.

Beyond these measures what has caused unrest and democratic backsliding?

One factor is the role of Bidzina Ivanishvili, a one-time tycoon in Russia who returned home and entered politics. He founded and has bankrolled the Georgian Dream coalition, and in 2012 he led it to victory in parliamentary elections. After a brief stint as prime minister, Ivanishvili left government but still pulls strings behind the scene, rendering some promising leaders powerless. Ministers come and go mainly at his whim. Most have a security background or are part of Ivanishvili’s trusted inner circle.

Another factor in the backsliding is a broken promise to reform the election system. In the wake of last June’s protests, Georgian Dream agreed that future parliamentary elections would be held on the basis of proportional representation rather than the current mixed system of proportional voting by party lists and majoritarian balloting in geographic districts. The latter aids candidates who have resources or support from regional power brokers.

This system has helped the well-financed Georgian Dream coalition gain a constitutional majority. Earlier this month, however, Georgian Dream votes in parliament were too few to pass the proposed change for next year’s parliamentary election. Many observers blame a change of heart by Ivanishvili. Disillusioned citizens took to the streets and the police again used heavy force, including water cannon, to disperse the crowds.

Economic frustrations are the third factor. Despite robust economic growth averaging 4.5 percent per year over the past decade, income inequality remains high. Progress on the planned, important deepwater port at Anaklia has come to a halt.  Perceptions that the country is going in the wrong direction have climbed. The National Democratic Institute poll last summer found that the main concerns are economic—jobs, rising prices and inflation, and poverty. Some 21 percent of respondents say they are unemployed and looking for work. Instead of developing policies aimed at the root causes, the government is casting about for foreign scapegoats.

Large, sustained street protests seem to reflect a widening gap between the power and the people. In several countries, this type of situation has led to popular convulsions Georgians and their leader would need to look within if they were to prevent this from happening in Georgia.  Dialogue with civil society and the political opposition would be needed along with more transparency and better governance. If the authorities keep using excessive force, and if economic growth does not benefit a wider swath of the population, citizens may keep taking to the streets.

Unceasing Russian propaganda against the European Union and NATO exploits these fissures and seeks to weaken Georgians’ westward vector. But public opinion is resilient; last summer’s National Democratic Institute poll found that 78 percent of respondents back Georgia’s pursuit of membership in the European Union, and 71 percent in NATO.

Georgia has come a long way toward creating a modern democratic state. Next year it has an opportunity to renew its democratic credentials by conducting a free and fair election. This could reduce any risk of decline toward an illiberal political system.

The West can help by stressing the urgency of democratic performance, and the importance of it for Georgia’s own domestic sake—and not as part of a balance sheet vis-a-vis Russia.

Denis Corboy was the director of the Caucasus Policy Institute, King’s College London, and EU ambassador to Georgia and Armenia. William Courtney is an adjunct senior fellow at the nonprofit, nonpartisan RAND Corporation, and was U.S. ambassador to Kazakhstan, Georgia and a U.S.-Soviet commission to implement the Threshold Test Ban Treaty. Kenneth Yalowitz is an adjunct professor at Georgetown University and Global Fellow at the Wilson Center, and was U.S. ambassador to Belarus and Georgia.