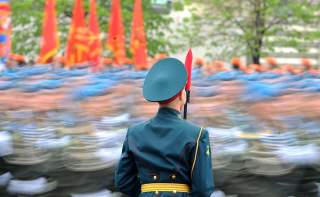 The Russia hysteria that is sweeping Washington, DC must end before severe and irreversible damage is done both to American domestic politics and U.S. international standing. Even a meeting last year between Russia’s chief rabbi and a lawyer who happened to work for the Trump Organization (and now has a senior White House position, but one unrelated to foreign affairs) is being cast as some sort of sinister spy encounter—a sign that the overheated rhetoric is getting out of hand.

I was always taught in international relations class that the job of diplomats is to facilitate as many meetings as possible with a wide spectrum of the host country’s domestic political establishment on a wide range of issues. This includes being able to understand the key currents in the legislature as well as obtaining a better read on what prospective candidates for high office might do in terms of policy choices that have an impact on the diplomat’s home country. There should be nothing improper about U.S. officials, legislators and experts exchanging views with any country’s ambassador and diplomatic staff—whether they are close allies, partners or even competitor nations. This includes Russia’s current ambassador to the United States, Sergey Kislyak. Efforts to cast normal diplomatic activity as some sort of nefarious plot risks closing down the few remaining active channels between the United States and a country that remains one of the world’s key actors on the global stage. Moreover, this attempt to play a game of “gotcha” where senators and other figures tout never meeting Kislyak as a sign of ideological purity—only to have photographic evidence of encounters with the Russian ambassador dredged up from the archives—looks foolish and petty.

Two former U.S. ambassadors to Russia, Michael McFaul and John Beyrle, who served as America’s chief envoys and personal representatives of the president during the Obama years, have been consistent voices of reason on this matter. They have warned—perhaps in vain—that America’s long-term interests are not served by attempting to suggest that contacts between American officials and Russian diplomats constitutes a treasonous or criminal act. Russia still remains a country with a sizeable nuclear arsenal and is a major player in the greater circle of Eurasia. Trying to establish channels of communication and ascertain possible areas of convergence and conflict with a new, incoming administration is prudent diplomatic activity.

Had Russian entities not sought to play a role in the 2016 election—and if Hillary Clinton had prevailed in the Electoral College—this might have never become an issue. However, given the circumstances, it is now necessary to depoliticize any investigation into setting down the definitive record of what happened over the past year. The investigation needs to be taken out of the political realm and no longer seen as a tool that can be used to alter the outcome of the 2016 contest or to overturn those of Trump’s Cabinet picks that the minority party disagrees with. I believe that we need a nonpartisan commission of experts to assess what happened, get a full accounting in place and, rather than relitigate the campaign, look forward to the far more important task of how to prevent it from happening again. It may also be wise to have the codification of new standards fall under the remit of such a nonpartisan commission given that the world now has much more globalized media and political consultancies. The standards would dictate what types of contacts between U.S. officials and non-U.S. entities are and are not appropriate. After setting up such a commission, politicians should sit back and let it do its work.

The 9/11 Commission provides a useful model. In the aftermath of the devastating September 11 attacks, the commission’s mandate was to understand what happened rather than to act as prosecutor. Its meticulous documentation of what led to the attacks helped dispense many of the conspiracy theories that were beginning to circulate in the months after 9/11 and helped tap down innuendoes on both sides of the partisan aisle aimed at holding the Clinton administration at fault or further challenging the electoral legitimacy of the Bush administration. The commission’s work highlighted mistakes made under the watch of both Bill Clinton and George W. Bush and focused on plugging the holes that were identified to prevent another major terrorist attack from crippling the U.S. homeland.

But we should also recognize that the damage is done. The current political climate now guarantees that any sort of pragmatic approach to settling the disputes between the United States and Russia is off the table. There seems no way that U.S.-Russia relations can be easily extracted from the hole in which they currently reside. In turn, those in Russia who were cautiously advocating for exploring areas where Moscow and Washington might cooperate are seeing that position being discredited.

Over the past few years, a number of analysts have warned about the creeping strategic partnership between Moscow and Beijing and how closer Russia-China relations create real problems for the United States. The window of opportunity to nudge the Kremlin to adopt a much more equidistant posture between the two—despite all of the slings and arrows Moscow has cast our way—is closing. Getting the U.S.-Russia relationship back to some semblance of a normal bilateral encounter was already going to be difficult, but it now may prove to be nearly impossible.