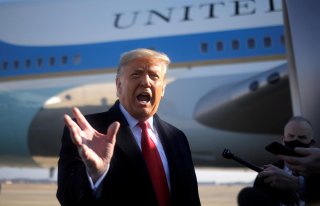 David Dorn lay dying in a pool of his own blood outside of a pawn shop in St. Louis while a bystander streamed his final breaths on Facebook Live. The retired police captain had been shot by looters while protecting his friend’s business amid the riots sparked by the death of George Floyd.

Fox News Host Tucker Carlson noted hours before the fatal shooting that then-President Donald Trump had refused greater use of force against riots on the advice of staffers who told him that cracking down on them would appear racist. That October, Trump unveiled the Platinum Plan. It promised criminal justice reform and $500 billion in “capital” for black communities, conceived at the behest of “Fuck tha Police" rapper Ice Cube, whose input Trump solicited for what was essentially a massive reparations program.

Much of this seems forgotten now; Dorn’s death on June 2 has been largely forgotten. Still, the details of his murder are worth recalling as speculation mounts over whether Trump could once more win the White House. A better question is whether he should run at all.

The disconnect between the idea of Trump as a strong, capable leader and reality covers more than the sidewalk on which Dorn died.

Trump’s crusade as an outsider against decrepit GOP orthodoxy was critical to his success in 2016, seemingly disrupting its trajectory. As a populist, he challenged the pieties and pseudo-principles of the establishment, violating taboos on trade, crime, immigration, and more. In 2015, political scientist Lee Drutman calculated that “populists”—defined as those who favored maintaining or increasing Social Security spending, while maintaining or decreasing immigration—made up 40.3 percent of the American electorate. On the other hand, Drutman found that the groups that wanted to cut Social Security and increase immigration, “‘business conservatives’ (3.8 percent), who are better described as ‘neoliberals,’ and ‘political conservatives’ (2.4 percent), who might also be described as ‘libertarians,’ made up only 6.2 percent of voters.” Even if unwittingly, Trump tapped into the former, which was a much larger constituency that blurred the lines of conservative and liberal.

Trump won, in other words, because he was supposed to change the Republican Party—but the party changed him.

In 2016, when Sen. Ted Cruz (R-Texas) was running for president, he attacked Trump for his lifelong support of universal health care. Trump stood his ground. “We do need health care for all people,” he said in response. “What are we gonna do, let people die in the street?” Despite Cruz’s efforts to turn “Trumpcare” an albatross, Trump beat Cruz and won Texas. The following year, he praised Australia’s single-payer system, saying to then-Prime Minister Malcolm Turnbull, “you have better health care than we do.” It likely helped Trump with voters that Republicans attacked him for not being a “true conservative,” and that he responded by admitting as much.

By 2018, Trump had made a hard turn on the issue, sounding indistinguishable from Cruz, dismissing the position he once held as “socialist.”

While some insist the Special Counsel investigation handicapped the Trump White House, a lot did get done—just not what was promised. Trump, who had campaigned as a fire-breathing populist in 2016, was by 2020 holding a naturalization ceremony on stage at a Republican National Convention that focused on criminal justice reform and the “GOP-friendly version of feminism.”

In 2017, the Tax Cuts and Jobs Act, created by former Goldman Sachs CEO Gary Cohn and shepherded through Congress by former House Speaker Paul Ryan, replaced Trump’s remarkably popular trillion-dollar infrastructure plan. After promising not to cut Social Security, Medicaid, and Medicare “like every other Republican,” he did just that for his 2020 budget. In December 2018, Trump signed the First Step Act, a soft-on-crime bill that released many dangerous criminals, some of which went on to recidivate and even murder.

On the eve of the 2020 election, Stephanie Mencimer, an advisory board member at the Fund for Investigative Journalism, wrote that “President Trump and the GOP-controlled Senate have single-mindedly pursued policies that will harm white working-class voters, through cuts in social welfare programs like food stamps and Medicaid and by allowing huge corporate mergers.” Those voters, of course, were also Trump’s staunchest supporters in 2016.

Though Ryanites would remain in the administration, Trump staffers more closely aligned to his base were gone by late 2018, from Steve Bannon to Darren Beattie. “[G]iven recent events, it is clear to me that forces that do not support the MAGA promise are—for now—ascendant within the White House,” Sebastian Gorka warned in a letter amid being forced out as an adviser in August 2017. Stephen Miller curiously survived in the White House, though nothing came of the trademark immigration issues he championed like ending birthright citizenship.

Despite how a person may feel about these issues and individuals, the events that surrounded them set the stage to show that Trump did not campaign as a conservative even though he governed as one and filled his administration with establishmentarians. One study even found that political appointees under Trump were only about 50 percent Republican—compared to the Clinton and Obama administrations, where appointees were around 80 percent Democrat.

As with Ronald Reagan, the myth of Trump has taken on a life of its own, divorced from the realities of his tenure.

Speaking with Sean Hannity in May 2016, Trump struck favorable notes on antitrust enforcement and said, “[Jeff Bezos is] using the Washington Post for power so that the politicians in Washington don’t tax Amazon like they should be taxed.” Not only was that statement followed by a massive tax cut for Bezos, but antitrust enforcement actually declined under Trump while monopolization expanded. Rather than seeking conflict with corporate masters of the universe, Trump courted them with the help of senior advisor and son-in-law Jared Kushner’s Office of American Innovation (OAI).

Ivanka Trump, who served as a White House advisor for her father, warmed to left-wing Google CEO Sundar Pichai, building a bridge between him and the White House. In partnership with the nonprofit Ad Council, Apple CEO Tim Cook, and IBM executive chairman Ginni Rometty, Ivanka’s message to Americans was “learn to code.” He was so attached to Silicon Valley that even after Twitter de-platformed Trump, he reportedly refused to join either Parler or Gab without receiving an ownership stake or equity in either company. Cook was able to play Trump well enough that the latter removed tariffs on the Apple Watch amid the trade war with China. Along with Bezos and Kushner, Cook helped steer Trump away from cracking down on visa worker programs that undermine the wages and job prospects of Americans. They would also secure generous exemptions for the first iteration of the pandemic “immigration ban” until public opposition made it impossible for Trump to avoid enhancing the measure.

Through the OAI, domestic policy advisor Brooke Rollins mobilized private sector pressure against Trump, forcing him to perform what Reuters called an “unusual reversal” on his “zero-tolerance” policy at the border. Rollins went from heading the Koch-funded Texas Public Policy Foundation to working in the OAI and ultimately leading the Domestic Policy Council under Trump. She was influential in promoting soft-on-crime policies and a more lax approach to immigration than what either conservative or liberal media care to admit.

The likelihood of an amnesty deal in Trump’s second term was high. One was floated in 2019 and another hinted at in 2020. On top of reversing the zero-tolerance policy at the border, the Trump administration introduced through the First Step Act a provision to shorten mandatory minimums for traffickers caught smuggling drugs into the country by boat or submarine; most drugs enter the United States by maritime routes. “These criminals have never been eligible for such leniency and are rarely if ever U.S. citizens,” warned Jeff Sessions, who served as Attorney General under Trump after being the first federal official to endorse him. Kushner, however, hated Sessions, and that hatred was reportedly the real wedge between “the last boy scout” from Alabama and Trump.

In November 2020, the Migration Policy Institute made similar findings on the legal immigration front.

Overall numbers of admissions on a permanent and temporary basis “declined only somewhat during most of the Trump years, remaining largely in line with broader trends that predated it.” Indeed, in August 2020, The Economic Times reported that the federal government approved 95.5 percent of all H-1B visa applications filed for the ongoing fiscal year—the highest ever since Trump took office. “This changed with the COVID-19 pandemic, which brought about a dramatic reduction in immigration unlike anything seen in years,” analysts found.