Danger: If Congress 'Blows Up' the Iran Deal 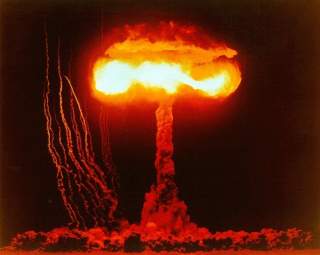 As Congress wrestles with the question of whether or not to support President Obama’s diplomatic agreement with Iran, there is a broad consensus over the need to confront Iran’s dangerous behavior. Iran has been a destabilizing player in the Persian Gulf for decades, supports the Assad regime’s murderous behavior and sponsors terrorist organizations that oppose Israel, such as Hamas and Hezbollah. It represses its own people and deserves maximum scrutiny of and pressure against this behavior.

However, the danger of the current Congressional debate over the nuclear deal is that it mixes up cause and effect, with opponents of the deal citing bad Iranian behavior as the reason to reject it, when the opposite is true. It is precisely because of bad Iranian behavior that the P5+1 aggressively sought an arrangement to verifiably block Iran’s acquisition of the bomb. And we achieved it. It would be disastrous to undo such an achievement.

Let there be no doubt that this is the best agreement ever negotiated to block a new country’s acquisition of nuclear weapons. One can quibble with some of the details at the margins of the agreement, but at its core, it is an excellent agreement.

Iran’s nuclear stockpile, which currently would allow for an Iranian nuclear breakout time frame as short as two to three months, will now be reduced by 97 percent, extending breakout to beyond a year. The plutonium reactor at Arak will be neutralized so that it cannot produce weapons-grade fissile material. The underground bunker at Fordow will be mothballed and converted into a civilian research lab. Iran will no longer enrich uranium beyond civilian-grade levels of 3.75 percent. Its centrifuge levels will be drastically cut by nearly 70 percent. And most importantly, all of this will be verifiable, as the most intrusive inspections regime ever negotiated will go into force, ensuring that not only will we be able to verify if Iran is complying with its commitments, but we will also be able to detect if any illicit activities are taking place.

So the pressure is now on Iran to deliver on its end of the bargain. The international community is watching its every move on the nuclear file. This agreement has achieved something remarkable: permanent global focus on Iranian nuclear activities. Iran will be on probation for more than a decade, required to demonstrate that it can hold up its end of the bargain.

We now have a platform to engage our partners on addressing Iranian regional ambitions, Iranian support for terrorism and Iranian violations of human rights. The nuclear file, once a source of deep anxiety, will now be converted into a source of opportunity to address such behavior.

To be sure, there is always the hope that Iran’s behavior will organically change as a result of this agreement. Perhaps the new opening with the West will usher in a dynamic that will, much like during the final days of the Soviet Union, create positive change. Certainly the Supreme Leader doesn’t want this to happen, but President Obama is right to acknowledge that this is a hope, not a policy. And so we must plan for no change while also acknowledging that the possibility exists. We should not take actions, however, that prevent such an outcome.

This is why we should ignore the false argument that a better deal can be negotiated, and that a Congressional "no" vote will facilitate such an outcome. For example, critics of the deal argue that economic pressure on Iran will be maintained even if Congress votes “no.” Essentially, these critics are arguing that the rest of the world will maintain sanctions if we want them to. And they are also arguing that, by extension, Iran will comply with the deal without getting sanctions relief. This is a dangerous fantasy.

The problem with this argument is that to maintain the sanctions regime in the absence of an international agreement, we'd have to sanction the rest of the world, something that we are currently not doing. The current sanctions regime has been extraordinarily effective in large part because it is voluntary. We have used the threat of extraterritorial sanctions to cajole this behavior forward, but we have consistently waived these sanctions when our partners have shown that they are complying with international sanctions.

This sounds like a technical detail, but it is quite important. Our partners in constraining Iran’s nuclear program are sanctioning Iran voluntarily and in accordance with United Nations resolutions. Their doing so allows us to waive extraterritorial sanctions against them. However, a congressional “no” vote on the deal will eliminate this option, meaning that we will no longer be able to waive sanctions on our partners, who as part of the deal will no longer sanction Iran. The result will be that our partners will either continue to sanction Iran, thus blowing up the deal, or they won’t sanction Iran, leaving us to sanction them. The former scenario will lead to an unconstrained Iran that can advance its nuclear program and the latter will lead to a trade war that will make maintenance of the sanctions unsustainable. Neither outcome will lead to Iran returning to the table for the negotiation of a better deal.

This is what would happen if Congress blocks the deal, thereby making the United States the spoiler. All at once, instead of the pressure being on Iran to modify its nuclear behavior, such pressure will fizzle and disappear. Iran will not be compelled to meet its obligations, because the United States would have violated the agreement and Iran would be free from its commitments. And the possibility of addressing our other concerns about Iran through collective action—the only effective route—would also disappear. Our security goals towards Iran, where we have astonishingly taken the most dangerous threat that Iran posed off the table, would no longer be attainable.

Joel Rubin served as Deputy Assistant Secretary of State for Congressional Affairs in the Obama Administration from 2014—2015 and is President of Washington Strategy Group, a foreign policy advisory firm.