The Danger of an Inadequate Nuclear Threat Assessment 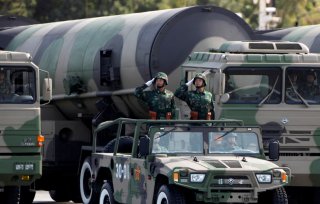 The vice commander of the U.S. Strategic Command told a Mitchell Institute nuclear seminar forum on August 27 that China may replace Russia as the top nuclear-capable adversary of the United States. Lt. Gen. Thomas Bussiere said he was concerned about the recent discovery that China is building up to four hundred new intercontinental ballistic missiles (ICBM) silos in Western China. This construction could be completed within the next two to four years if it is done at a pace not unlike that of the United States when it constructed its original Minuteman ICBMs. The missile slated for deployment in these silos would be the Chinese Dongfeng-41, which can carry six to ten warheads.

When is the crossover point? Is it when China actually deploys more nuclear weapons than Russia? “We believe, in the next few years,” Bussiere said. While the two nations have differing national objectives, there are indications that those nations are “cooperating across different spectrums and presenting a cooperative deterrence model,” he said.

Bussiere noted that “both China and Russia have the ability to unilaterally escalate a conflict to any level of violence in any domain, in any geographic location, at any time, with any instrument of their national power . . . we haven’t faced a . . . global situation like that in 30-plus years,” according to the Air Force Association’s John Tirpak. And while China will soon exceed Russia force capability, “there is no framework under which to negotiate arms limits with China, and China has expressed no interest in creating one,” Bussiere said.

Bussiere’s warning may come as a surprise to many national security specialists. Depending upon the source one references, China is often assumed today to want only a limited arsenal, on the order of no more than 250-350 warheads in its deployed nuclear force, consisting of a limited number of land-based fixed and mobile ICBMs, some submarine-launched missiles, and a modernizing strategic bomber force.

This current force has long been described by the Chinese government and similarly mimicked by many western analysts,  including some U.S. intelligence agencies, as a “small minimal deterrent,” which is largely passive, with China overall described as a non-threatening economic and nuclear power characterized by a “peaceful rise.”

Less common is the view that China may already have a deployed nuclear force approaching 1000-3000 warheads as asserted by a number of U.S. experts on the subject such as Rick Fisher, Brad Thayer, Peter Pry and Mark Schneider.

However, whatever size China’s nuclear arsenal may currently be, it is dramatically growing to a level that could be equal to or be greater than the entirety of the current U.S. or Russian deployed strategic nuclear force.

There are at least three serious implications of the size of the Chinese build, which would require a robust analysis by Congress—such as within the U.S.-China Commission—or by the U.S. intelligence community.

First, the Russian strategic, long-range warheads (under New START Treaty limits) potentially available for deployment exceed that of the United States. Second, Russia’s shorter range, theater nuclear forces (under no arms deal limits) are at least now 400 percent of the U.S. total. These things are happening under the shadow of a new, third element: China’s deployed nuclear warheads. These warheads have not been part of an arms control framework (no arms deal restricts China’s nuclear forces) or an explicit new threat for sizing the U.S. strategic nuclear deterrent force.

Here the question is simple. Do numbers matter? Does the size of the U.S.-deployed nuclear arsenal—90 percent of which is bounded by the 2010 New START Treaty with Russia—now have to be examined in light of the major Chinese build-up? Does the future hold an environment where during a crisis the United States could be facing as many as five thousand combined strategic warheads held by Russia and China?

Deterrence in the current geostrategic landscape is often considered viable as long as the United States has a secure, credible retaliatory capability—even under scenarios where the United States fully rides out an enemy first strike and even if the United States was deploying its forces on a day-to-day non-generated peacetime pace.

Here some background is important.

Many in the disarmament community do not believe numbers matter in terms of securing deterrence as long as the United States can inflict serious damage to an adversary, which is often usefully described as the number of cities that it could attack. The founder of Global Zero, Bruce Blair, testified before Congress in 2019 that 300-600 deployed U.S. warheads were sufficient.

Others believe deterrence is credibly maintained only by being able to destroy an adversary’s major nuclear and military capabilities, as well as its leadership, without which an enemy country cannot wage war and maintain hegemonic power.

Totalitarian states are willing to accept the deaths of millions of their own people, and the destruction of many of their cities, and still consider it “victory” were they to prevail in a nuclear conflict. And prevailing may have much to do with the assumption that enemies of the United States make with respect to the prospects of being able to take out U.S. nuclear forces.

In 1972, when the first arms deal was signed, Strategic Armed Limitation Talks (SALT I), the United States had over twenty-seven hundred nuclear delivery vehicles (SNDVs), including over one thousand missile silos, forty-one submarines of which dozens were at sea, and hundreds of strategic bombers, many of which were airborne. That force eventually would grow to roughly twelve thousand deployed strategic warheads as did the force of the USSR.

America’s SNDV level was down to eleven hundred prior to the 2010 New START Treaty agreement, and Russia was around five hundred. But in the New START negotiations, to secure Russian consent, as Gen. James Cartwright once said, the United States more than split the difference with Moscow and cut its SNDV platforms from eleven hundred to seven hundred.

But that seven hundred number is not as robust as it might appear. Russia or China, to deliver counterforce damage and disarm the United States, has to destroy roughly five hundred targets—four hundred ICBM silos, forty Launch control facilities, three bomber bases, two SSBN submarine ports, and some C3I nodes. The fully survivable force is currently those submarines we rotate at sea or are in transit, some four to eight submarines. That is currently a survivable force, according to nuclear experts.

However, advocates of deeper warhead reductions beyond New START want to unilaterally eliminate U.S. land-based ICBMs, which would reduce the U.S. deployed warheads to one thousand. They want to reduce the U.S. target list with which Russia and China have to be concerned to around as few as twelve to sixteen assets.

Now, the U.S. retaliatory capability from an un-generated, day-to-day deployment, if one assumes its ICBMs and bombers are destroyed on the ground along with its submarines in port, is arguably six SSBNs submarines on patrol, each with twenty missiles and an assumed 480 warheads.

However, will that be adequate when the United States is facing both a fully nuclear-armed China and Russia? After all, Mark Schneider believes China and Russia combined might have over seven hundred ICBM silos, requiring some fourteen hundred warheads—assuming that two warheads per silo are needed to ensure a high probability of destruction.

If the United States aims its retaliatory capability at enemies cities, would totalitarian personalities accept the destruction of upwards of 25 percent of their population in exchange for the annihilation of their enemy and world domination? The answer to that question might be “yes” but a person cannot answer it intelligently unless they analyze the new nuclear balance which is now changing in the world today.

While arms deals did in fact reduce deployed nuclear forces dramatically starting with the 1987 Intermediate-Range Nuclear Forces Treaty and the subsequent reduction agreements beginning with START I in 1991, U.S. nuclear deterrence cannot be achieved through arms control. The U.S. “nuclear modernization holiday” that will have lasted over forty years is in large part due to “global zero” being thought of as a serious idea and not a fantasy.

Does deterrence require the continued U.S. counter-force doctrine—of having enough survivable nuclear capability to inflict at least equivalent counterforce/counter value damage on the enemy, especially enough to ensure adversary political-military leaders do not survive a nuclear exchange? Or does the United States adopt disarmament group opposition to counterforce doctrine and adopt arms control as a means of reducing nuclear weapons to such low levels that in the interim stage from “global zero” to only “city busting” is a deterrent option?

Additionally, what is the role for space-based missile defenses, especially if they are designed to make disarming nuclear missile strikes obsolete where “he who strikes first no longer wins.”

Part of the emerging posture the United States might seek is a greater number of platforms or assets, apart from the extent to which warhead levels are limited. Years ago, I asked Cartwright if it didn’t make more sense to expand our platforms and SNDVs even as the United States reduced warheads so the calculus of deterrence improved. He explained the Russians would not agree.