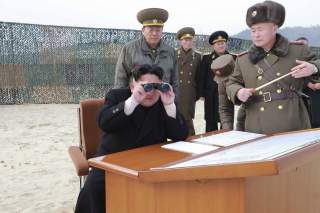 Analysts agree North Korea is quite serious in its threat to shoot down American warplanes, even if they are flying in international airspace. The threat came in response to President Donald Trump’s latest challenge to the Democratic People’s Republic of Korea (DPRK) via Twitter, in which he doubled down on his proclamation that the North’s days were numbered if they continued to provoke and threaten the United States.

On September 26, intelligence indicated that officials sent a small number of fighters, external-fuel tanks, and air-to-air missiles to an air base on the east coast of the country, ostensibly to place itself in a better position to intercept and target U.S. planes flying in the area. This move shows Pyongyang is serious about at least projecting an image of a willingness to follow through on its threat.

DPRK attacks on U.S. aircraft, though rare, have happened. The last one occurred December 18, 1994; an Army OH-58 Kiowa helicopter patrolling the Korean Demilitarized Zone (DMZ) was downed, resulting in the death of one pilot and the capture of the other (he was released shortly thereafter). The most egregious violation, however, occurred April 15, 1969. A Navy EC-121 Warning Star intelligence aircraft was shot down by a North Korean fighter jet over the Sea of Japan, killing all thirty-one crewmembers.

In neither case did the U.S. retaliate. The downing of the helicopter in 1994 was far too low-level of an incident and was largely the result of pilot error. Therefore, both sides were inclined to de-escalate rapidly and move on from the incident.

After the downing of the EC-121 in 1969, however, the Nixon administration considered major response options, including a nuclear strike, against North Korea. Many factors intervened, however, and the blatant act of aggression by Pyongyang went unanswered. The administration was “ashamed” of the incident and vowed to never allow such an attack to go unanswered. For the rest of Nixon’s term, the North Koreans never again provoked the United States.

There have also been many close calls, the most recent instances coming in the previous decade. On October 20, 2000, two U.S. aircraft participating in an exercise accidentally flew into the DMZ, a move which could have easily sparked a violent reaction from the North. On March 4, 2003, an Air Force RC-135S Cobra Ball intelligence plane was intercepted by four DPRK fighters over the Sea of Japan. Though the North Koreans demonstrated hostile intent, the RC-135S continued on its way and escaped, unharmed.

The Trump administration has made its position clear that it will respond militarily to any overt act of aggression. While North Korea is not likely to test this proposition, it does not prevent the country from engaging in other actions short of outright violence. For example, instead of firing upon U.S. aircraft, North Korean air defenses or fighters can issue threats via radio or “illuminate” them with fire-control radar, as they did to the RC-135S in 2003, aiming to intimidate the United States—or even provoking an incident that Pyongyang can use to construct a damning narrative against Washington. It is precisely this sort of subversion, rule-exploitation and self-victimization that rogue regimes like the DPRK specialize in. It would be quite a surprise to see the North not use Trump’s ultimatums to their advantage.

But even demonstrations of hostile intent, such as illuminating U.S. aircraft with radar, are incredibly reckless and could result in catastrophe for both sides. It is not clear what, if any, guidance higher authority has issued to commanders in theater on how to deal with North Korean hostility. Establishing such guidance and clarifying the rules of engagement ahead of time will help avoid uncontrolled escalation, but what this guidance and rules of engagement specifically entails matters as well.

For example, how should hostilities in-progress be handled? Under what circumstances are U.S. pilots authorized to take preemptive measures to defend themselves? Will units be required to consult higher authority before returning fire? Will they be permitted, as Ronald Reagan decreed with regards to Libya in 1981, chase them “right into the hanger?” Without answering these questions ahead of time, the United States will find itself stumbling over itself during an actual emergency, potentially making an unpleasant situation even worse.

Should a U.S. plane be fired upon by the DPRK, the United States has a wide range of military assets available to take part in a response, including both land-based and sea-based fighters and bombers and surface warships and submarines armed with Tomahawk cruise missiles. A lack of intelligence was cited as an issue that prevented the United States from retaliating for the 1969 incident; the Unite States now has a whole spectrum of intelligence, surveillance, target acquisition and reconnaissance resources at its disposal to help select targets and plan an operation.

Given past experience, however, the weapon of choice will likely be the Tomahawk cruise missile. Its accuracy and range allow precision-targeting without placing men and delivery platforms in harm’s way. Even if the United States were to employ aircraft in a retaliatory strike, Tomahawks would play a crucial role in neutralizing North Korea’s dense air-defense network, a necessary step to ensuring the success of air operations.

Spearheading an air attack would be the B-1B Lancer, B-2A Spirit and B-25H Stratofortress strategic bombers, the very platforms North Korea fears and is threatening to target. Launching from Andersen Air Force Base on Guam, their long range and stand-off capability, along with the stealth capability of the B-2, allows for surprise and the ability to do damage without risk to aircraft and aircrew. The AGM-86C Conventional Air-Launched Cruise Missile (CALCM), carried by the B-52, and the newer AGM-158 Joint Air-to-Surface Standoff Missile (JASSM), carried by all three aircraft, deliver precision-strike capability from hundreds of miles. Unclassified information shows that the CALCM can fly for 680 miles and the JASSM has a range of 620 miles.

If the United States opts for a larger strike, then an aircraft carrier and its air wing of sixty-plus aircraft would play a significant role. Being stationed in a body of water like the Sea of Japan will give the carrier more direct access to targets in the DPRK that cannot be as easily accessed by land-based assets in the Republic of Korea (ROK), which must either fly directly into the North by crossing the DMZ or take a longer, roundabout route. This approach could also be detected by North Korea, eliminating the element of surprise, whereas long-range bombers and carrier-based fighters start from a further distance, and it would take the Korean People’s Army longer to piece together a picture indicating an attack might be underway. Land-based aircraft in South Korea and Japan could play support roles, however, such as conducting electronic warfare and or refueling warplanes.

Barring mitigating factors, retaliation will be confined to the target(s) most responsible for the initial attack. If the attack is perpetrated by fighters of the Korean People’s Army Air Force, the United States and its allies will likely target the air base from which the fighters originated. If North Korea’s dense air-defense network is the culprit, then one or more batteries will be targeted to limit the DPRK’s ability to commit such an act again. The strike will probably take place at night because fighting in the dark would showcase America’s strength and exploit North Korea’s weakness. The number of targets struck would depend largely on how much of the North’s defenses would need to be neutralized in order to allow the main attack to be successful. Therefore, it is unlikely such a strike will be a “pinprick.” Instead, it will be a rather sizeable operation involving many “shooters” and “supporters.”

The most important question, however, is what comes next. The United States does not have the experience to draw upon that would guide it through a military action against the DPRK, nor is there a clear roadmap to de-escalation. The North will likely seek to return the favor and has a wide variety of options for retaliation—artillery bombardment, border incursions and skirmishes, naval attack, cyber warfare, and terrorism. A measured retaliatory strike for the downing of a U.S. plane would probably be insufficient to deter North Korea from further hostilities, given that it now possesses a nuclear deterrent. The end result would be tit-for-tat exchanges that result in uncontrolled escalation of tensions that ultimately results in a larger war.

There are also two potential wild cards—one expected and one unexpected. China, which has stated that it will remain on the sidelines if North Korea engages in an act of aggression, will potentially draw the ire of North Korea and precipitate a split from its longtime ally should it stand idly by during a U.S. retaliation. China, along with Russia, will likely call for cooler heads to prevail, but what is unclear is whether they will openly condemn Pyongyang and/or discourage the United States from acting in response. It is during such a crisis that China and Russia will be forced to show some of its cards, forever changing the strategic situation in the region.