A Dangerous Bargain: Don't Sacrifice a Strong Nuclear Deal with Iran for Help against ISIS 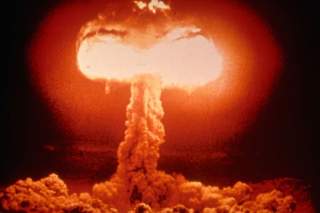 On the basis of recent reports, one cannot escape the conclusion that the negotiations between the P5+1 and Iran for a comprehensive nuclear deal are not going well as far as the prospect of achieving a nuclear deal that will effectively keep Iran from developing a nuclear weapon at a time of its choosing. In fact, they are going very badly in this respect, and one does not have to be Benjamin Netanyahu in order to notice that. There is no indication that Iran is willing to make any meaningful compromise regarding its nuclear program, and on the enrichment front, Iran is actually demanding a tenfold increase in its enrichment capability.

Compounding the difficulties is that the leverage of the P5+1 negotiators has been eroding in parallel. Beyond the partial easing of the pressure of sanctions, this finds expression in the fact that every time these international negotiators come forward with a new suggestion for a “face-saving concession” to Iran, they weaken their own resolve and consequently their bargaining power. Indeed, whenever the negotiations hit a snag, it is the P5+1 group that comes up with a proposal for compromise, which invariably involves backing away from a previous legitimate demand. Iran, by contrast, has not budged from its steadfast position, and its idea of “compromise” is: “if only the United States would back away from its unreasonable demands, we could reach a deal in no time.” While a successful outcome will likely entail sacrifices or concessions from both sides, so far we are witnessing a stark asymmetry in terms of the concessions that have been made. The P5+1 has made significant strategic concessions, like forgoing UNSC resolutions that had been taken regarding Iran, and agreeing to allow Iran to maintain a limited enrichment program. For its part, Iran has so far refrained from any strategic reciprocity.

Moreover, as we’ve written on several occasions, this is inherently not an equal give-and-take negotiation. It is Iran that has to comply with P5+1 demands, because Iran is in violation of its NPT commitments. Therefore, not only should the P5+1 not be compromising on previous demands—thereby weakening its leverage when Iran is not compromising at all—but, in fact, the major concessions should be made by Iran. A bad compromise, as we saw regarding the interim deal, will enable Iran to keep holding on to its dangerous breakout capability, and this pattern cannot continue regarding a comprehensive deal.

Now there is a new consideration for the United States: the threat of ISIS, which has altered the setup. It seems of late that the nuclear negotiations are taking a back seat to the threat posed by ISIS, and the need to mobilize an international coalition to combat the ever-growing threat. The fact that Iran is a major player in both Syria and Iraq has produced a new tendency to highlight the merits of engaging Iran in the effort to combat ISIS, while overlooking the rather fundamental divergence between the United States and Iran in terms of their respective interests in the region. With at least two burning issues on the table—and a perceived inability to deal with both with the same degree of intensity, because each involves Iran, but in a contradictory manner—it looks like there is a choice to be made.

This has created a new opening for those who for years have been advocating that the United States ease the pressure on Iran on the nuclear front, because they support U.S.-Iranian rapprochement, and believe it is in the cards. Their current argument is that the United States must cooperate with Iran in confronting the ISIS threat, and that means getting a quick nuclear deal in order to remove that “hindrance” from the agenda.

The problem is that the Iranian nuclear issue is anything but a snag on the road to cooperation with Iran. It is a tremendously significant and serious long-term threat to regional security. Without diminishing the threat that ISIS poses to the interests of the United States and its regional partners, under no circumstances should a good nuclear compromise with Iran be traded away for the sake of getting Iran on board to fight ISIS. Everything that has been said over the past decade regarding the danger of a nuclear Iran remains true, and does not change because of ISIS. Iran’s regional agenda will not change, even if it cooperates with the West in fighting ISIS. Moreover, what are the real prospects for such cooperation? Can Iran be expected to be a reliable and/or effective partner in regional cooperation? While it is true that there were pockets of cooperation in the past, it was when Iran felt weak, and that is no longer the case. The supreme leader is strongly against forging new relations with the United States, and has opposed any cooperation with Washington.

If Iran is allowed to out-maneuver the international community on the nuclear issue, it will be a tremendous boost to its sense of power and influence in the region and beyond. If there is no reason to expect that its sinister designs for the Middle East will change, obviously this is an extremely dangerous gamble that would have both short- and long-term implications for the destabilization of the Middle East and could undermine the global nonproliferation regime beyond repair.

ISIS provides the explicit gory pictures that make everyone collectively cringe with horror, while the Iranian nuclear program has nothing to show for now, and seems to be an endlessly progressing threat that has yet to materialize. But make no mistake, sacrificing the Iranian nuclear file for some short-term gain regarding ISIS—when it is not even clear what the added value of cooperation with Iran would be—is an extremely dangerous bargain. It would be by far Obama’s most severe foreign-policy failure.

Emily B. Landau is Head of the Arms Control Program at the Institute for National Security Studies (INSS), at Tel Aviv University and the author of“Decade of Diplomacy: Negotiations with Iran and North Korea and the Future of Nuclear Nonproliferation.”