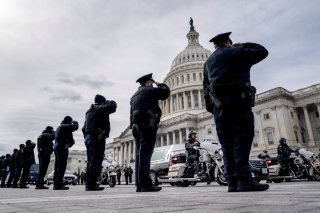 Homicides are up in Washington, DC by 19 percent and motor vehicle theft by 50 percent from 2019-2020. This year, the nation’s capital has already witnessed 39 murders (the data can all be viewed at a glance on the police departments website). The pandemic has also created a spike in thieves targeting local businesses. Is this really the moment to push for defunding the local police force?

An independent commission established last September by DC Council Chairman Phil Mendelson is examining policing in the District appears to believe that it is. On Monday, the panel voted on its report. It declares, “to help ensure the District does not revert to the current harmful overreliance on policing and incarceration, this investment should be accompanied by a realignment and reduction of [the police department’s] size, responsibilities, and budget.” What the commission is proposing represents liberal social engineering at its worst. Far from promoting safety, it will embolden criminals in Washington’s most dangerous neighborhoods.

Slashing the number of police officers is not going to inhibit crime. It will promote it. Indeed, acting police chief Robert J. Contee III says that the police force is already overstretched. He is urging the city to raise the number of officers from the current force of 3,650 to 4,000. He notes that the demands on the police now include combating domestic terrorism, whether from the Right or Left.

The report does not simply seek to reduce the number of police officers. It also offers a welter of proposals for curbing their ability to apprehend suspected criminals, including crimping their ability to interrogate them at traffic stops. In essence, the authors of the report want the police to stop policing.

We’ve been here before. In the 1980s and 1990s, Washington became a byword for crime. In September 1989, President George H.W. Bush held up a bag of three ounces of crack cocaine on national television that had been apprehended during a bust in Lafayette Park. A year later, the city’s mayor, Marion S. Barry, Jr., was arrested at the Vista International Hotel on drug charges (in 2018, the city dedicated a bronze statue to him on Pennsylvania in front of the John A. Wilson building).

Certainly, there is room for reform, particularly when it comes to use-of-force. A new DC auditor report suggests just that.

But it shouldn’t be forgotten that the metropolitan police and the U.S. Attorney’s Office have already undergone a series of reforms with more emphasis on community policing.

A former federal prosecutor in DC tells the National Interest, “I’m not so sure that residents of the neighborhoods where the crimes occur would agree with cutting back. If the idea is to be responsive to communities, a proposal like this should have to obtain the specific consent of communities that are most affected.” Indeed, as the Washington Post reports, Sandra Seegars, a resident of Congress Heights in Ward 8 and a local activist, told DC Council member Charles Allen that Contee deserves support: “What I need the elected officials to do is not impede him from performing the duty of chief of police. Allow the police to treat criminals like criminals.” How right she is.