A Dangerous Showdown in the South China Sea 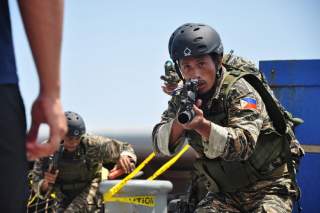 Far from ameliorating territorial disputes in the Western Pacific, President Obama’s latest trip to Asia seems to have instead ushered in a new era of Chinese assertiveness across adjacent waters. In the absence of an unequivocal American commitment to come to the rescue of regional allies such as the Philippines if a war were to erupt over disputed features in the South China Sea, China has been encouraged to accelerate its age-old strategy of building facts on the ground.

In recent months, China has dispatched several oil rigs to contested areas across the South China Sea, with Vietnam as the primary target, while stepping up its reclamation activities in the Spratly chain of islands, with the Philippines as the primary victim. China has eagerly displayed its technological prowess by creating artificial islands and deploying state-of-the-art drilling rigs across the area.

By transforming rudimentary features (e.g., reefs) into islands, which can support human life and reflect Beijing’s effective exercise of sovereignty, China aims to (indirectly) justify its notorious “nine-dash-line” doctrine by projecting additional 200-nautical-miles Exclusive Economic Zone (EEZ) from the largest features under its control. This way, China would be able to (theoretically) argue that even based on modern international law it has legitimate claims across the South China Sea.

Moreover, ongoing construction activities allow China to more effectively project military power across the area. The prospective establishment of military garrisons and airstrips over artificially-enhanced features would place China in a credible position to impose an Air Defence Identification Zone (ADIZ), which, in turn, demands a network of nearby bases (and aircraft carriers) to support sustained aerial operations across the South China Sea.

In addition, China has also become less shy with revealing the full extent of its territorial ambition across the South China Sea. In late-June, Beijing unveiled a new official map, which is unprecedented in how it unabashedly reflects China’s maximalist interpretation of its historical claims across adjacent waters. Dispensing with any form of (cartographic) subtlety, the map unambiguously places equal emphasis on both land-based and maritime territorial claims of China. Unlike the older maps, which reflected Beijing’s (then) studied territorial ambiguity, the new map portrays contested features in the South China Sea as an integral part of China’s territorial limits.

It is increasingly clear that China seeks de-facto—​if not de jure—​dominance over adjacent waters and it has employed more coercive measures to corner neighbouring states such as Vietnam and the Philippines. No wonder, even the perennially-neutral Singapore has begun to speak out against China, with Prime Minister Lee Hsien Loong decrying the emerging “might is right” dynamics in the South China Sea, and calling for the resolution of the disputes in accordance to international law.

Despite China’s late-2013 agreement to proceed with more concrete negotiations with the Association of Southeast Asian Nations (ASEAN) over the guidelines of a proposed Code of Conduct (CoC) in the South China Sea, this year has instead  only seen largely fruitless exchanges over the CoC, which is essentially a non-binding, declaratory statement.

The perceptible regression vis-à-vis the negotiation of a CoC has revealed the stubborn superfluity of existing regional multilateral platforms.  Given China’s overwhelming influence over certain members of ASEAN, particularly Laos and Cambodia, consensus-driven negotiations over a robust regional maritime regime are unlikely to bear fruit anytime soon. So far, founding ASEAN members such as Indonesia—Southeast Asia’s informal leader—have expended their diplomatic capital on preventing China-friendly members from sabotaging efforts to “socialize” China into accepting regional principles on peaceful, rule-based resolution of territorial disputes.

It will take a concerted effort by ASEAN’s key members, particularly Singapore, Indonesia, and Malaysia, to forge a credible multilateral response to the ongoing disputes. Far from representing “just a drawing” based on dubious historical claims, as some regional officials tend to argue, China’s new map signals the country’s hardening stance. The map builds on China’s late-2012 decision to issue new passports, which included Chinese maps covering almost the entirety of the South China Sea, disputed land features with India such as Arunachal Pradesh and Aksai Chin, and several tourist destinations in Taiwan.

One could argue that the latest national map serves as an indication of how China is treating its territorial claims in the area as a “core interest”—in effect, leaving little room for any meaningful compromise, at least in the near future. Beyond reiterating China’s territorial ambitions to the outside world, the map represents the Chinese Communist Party’s (CCP) intensifying campaign to rally the Chinese people behind a nationalist cause. There is obviously a huge element of domestic political calculation in play. In the words of China’s Foreign Ministry, the map aims at “promoting citizens' better understanding of ... maintaining (our) maritime rights and territorial integrity.” And the diplomatic implications are clear: The more the territorial disputes enter the public discourse—and China’s historical claims are etched into the public consciousness as eternal truths—the more difficult it would be for China’s political leaders to openly compromise on the issue.

Slowly but surely, China is embracing a more pro-active territorial policy, which places greater emphasis on intimidation rather than calibrated accommodation. Beijing’s continued refusal to explicitly use conventional military forces to push its territorial claims, however, underscores the country’s preference for “managed escalation”.  In short, China may have upgraded its “small stick diplomacy”, but the military gloves aren’t fully off yet.

For China, at this stage the best way to win the territorial disputes is to rely on a more streamlined, well-equipped armada of para-military forces with formally civilian character. And China has not shied away from using various forms of economic sanctions to up the ante.

For Hanoi, which for years has painstakingly sought an amicable settlement and tried to avoid any major confrontation with its giant neighbour, Beijing’s decision to dispatch HYSY981 deep into Vietnam’s EEZ was shocking. But Vietnamese officials were even more astounded when China decided to dispatch more oil rigs into the South China Sea while Yang Jiechie, a former foreign minister and among China’s most-respected political figures, visited Vietnam to supposedly de-escalate bilateral tensions. Far from encouraging his hosts, however, Yang went so far as scolding Vietnam for “hyping” the maritime disputes in the South China Sea.

Amid the ongoing naval standoff between Hanoi and Beijing, which sparked violent anti-China protests in Vietnam, the CCP prohibited state-owned companies from bidding for new projects in Vietnam. Given the importance of China as a leading trade and investment partner of Vietnam, such measures could prove more devastating than Beijing’s mid-2012 decision to impose largely symbolic sanctions against the Philippines.

As China rapidly changes facts on the ground, the Philippines have been gripped by panic. Manila’s decision to take Beijing to court has failed to deter China against any provocative further action. In response, Philippine Foreign Secretary Albert Del Rosario has desperately called on the special Arbitral Tribunal in The Hague to expedite its adjudication of the Philippines’ complaint against China. The Philippines maintains that the features in the South China Sea can’t generate beyond 12-nautical-miles territorial sea, and have been encouraged by recent arbitration cases that put into question China’s maximalist interpretation of international law. Realistically, however, it might take years before the adjudication process is concluded—complicated by the fact that China has boycotted the whole procedure.

Recognizing the limits of American commitment to the region, as the Obama administration grapples with multiple conflicts across the globe and painstakingly courts better military-to-military relations with China, Vietnam and the Philippines have turned to Japan, which has promised to provide greater military and economic assistance to its Southeast Asian partners. Both Vietnam and the Philippines are seeking varying forms of military agreements to allow more sustained Japanese strategic footprint in the South China Sea, although there is still lingering concerns vis-à-vis the Abe administration’s “revisionist” views on Japan’s historical crimes.

Since his return to power in late-2012, Prime Minister Shinzo Abe has wasted no time to establish Japan as a counterweight to China. Tapping into the fears of ASEAN countries vis-à-vis a powerful China, the Abe administration has tried to present his country as a “force for good”. In late-2013, Japan offered $20 billion in economic assistance to Southeast Asian nations, while  Japan’s Self-Defense Forces (JSDF) played a leading role during the massive humanitarian relief operations in the aftermath of Typhoon Haiyan in the Philippines. In an impressive display of public diplomacy, the Japanese Ambassador to Philippines Toshinao Urabe also went the extra mile to apologize for Imperial Japan’s World War II aggression against the Philippines.

Cognizant of widespread domestic opposition to his plans for amending Japan’s pacifist constitution, Abe has astutely pushed for a maximalist “reinterpretation” of existing legal provisions regarding Japan’s security obligations beyond its immediate territories. Under the doctrine of “collective self defense”, Abe hopes to pave the way for a de facto transformation of Japan’s regional security role, allowing Japanese maritime forces to (a) play a direct role in “stabilizing” Sealines of Communication (SLOC) such as the South China Sea and (b) to assist security partners in a crisis situation.