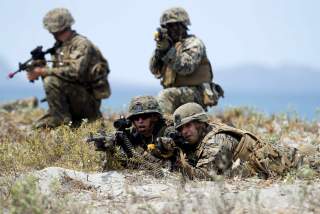 To this end, the Treasury Department and the White House should first assess whether current legislation and executive orders provide OFAC with the necessary authorization to target the PAFMM. Next, Treasury should identify the chokepoints within the PAFMM or its extended networks whose effectiveness may be impaired by sanctions. Potential targets may include collaborating financial institutions, fuel-providing companies and administrative organizations. OFAC should also consider designating key officials within the Chinese navy and government associated with the PAFMM program.

Two important questions for Treasury to address will be whether the PAFMM’s enablers interact with the U.S. financial system and whether Beijing could easily find substitutes for the targeted firms or entities.

While a portion of PAFMM’s enablers likely lack U.S.-dollar exposure—thus U.S. sanctions would be of limited use in directly impairing their operations—many senior political and military officials do have substantial assets abroad. The United States should carefully weigh the utility of targeting them. While practical hurdles would no doubt exist, a focused sanctions campaign would nevertheless signal U.S. resolve in the SCS and could create a chilling effect for would-be PAFMM collaborators. To help implement such a strategy, Congress should consider allocating additional resources to OFAC to ensure this new effort does not detract from the office’s ability to meet its substantial existing obligations.

Chinese fishing vessels are already unpopular for the role they play in the PAFMM and through their illegal fishing practices. The Philippines, for example, filed two diplomatic protests in August against the presence and conduct of China’s maritime militia. Standing up to PAFMM’s audacious behavior is an area of common interest amongst the United States and its regional partners. Tangible action by the United States against the PRC’s illegal maritime activities might have the added benefit of bringing Washington closer to its Indo-Pacific partners more broadly.

THE UNITED States has always been a seafaring and trading nation. The prosperity and way of life Americans enjoy depend on the unfettered flow of commercial vessels and the products they carry. Based on this, Americans have learned, sometimes painfully, that what happens in seemingly obscure corners of the world can hurt us at home. Consequently, Americans dismiss Chinese activities in the SCS at their own peril.

The 2017 U.S. National Security Strategy recognized the stakes. It noted that China’s “efforts to build and militarize outposts in the South China Sea endanger the free flow of trade, threaten the sovereignty of other nations, and undermine regional stability.” However, strategic documents and pronouncements mean little if they simply collect dust on the shelf. Washington must more effectively translate such strategies into tangible actions to shift Beijing’s cost-benefit analysis in the SCS. By working with allies and partners and implementing a comprehensive approach that employs all tools of national power, Washington can do just that.

Mackubin Thomas Owens is a research fellow at the Foundation for Defense of Democracies (FDD), where he contributes to FDD’s Center on Military and Political Power (CMPP), focusing on Indo-Pacific military and naval affairs. A former Naval War College professor, he is also the editor of the journal Orbis.

Bradley Bowman is Senior Director of the CMPP at FDD. He has served as a National Security Advisor in the U.S. Senate to members of the Senate Armed Services and Foreign Relations Committees, as well as an active duty U.S. Army officer, pilot and assistant professor at West Point.

Andrew Gabel is a research analyst at FDD.