Dark Clouds Ahead for the Latin American Left 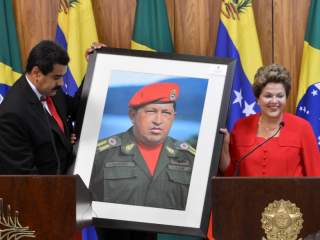 Latin America’s left is not having a good time. In the closing months of 2015, the lengthy period of leftist-oriented government in Argentina came to an end. In Venezuela, the centrist opposition overwhelmingly defeated the socialists, under the uninspiring leadership of President Nicolás Maduro, for control of the national legislative body. In Brazil, center-left President Dilma Rousseff’s administration struggled with the worst recession since the 1930s, persistent calls for her impeachment and a major corruption scandal around the state-owned oil company, Petrobras.

This year is not likely to be much better. The Brazilian corruption investigation, Lava Jato (Operation Car Wash), has now entangled former President Inácio Lula da Silva. In Bolivia, voters defeated a referendum in February to grant President Evo Morales an opportunity to run for a fourth term. To the backdrop of a harsh economic downturn, Ecuador’s president, Rafael Correa, has opted not to pursue another term. And in one of the most symbolic turnarounds, the Castro regime is preparing for the March 22–23 visit of U.S. President Barack Obama.

Only a few years ago, the Latin American left appeared ascendant. Leaders such as Lula, Morales and Venezuela’s Hugo Chávez were popular with the majority of their citizens, as evident in their electoral victories. At the same time, throughout much of the region, the number of people living in extreme poverty declined, ranks of the middle classes expanded and efforts were made to upgrade infrastructure. Some of this happened under these leftist governments. What went wrong for the left in Latin America?

Three major factors explain the decline of the left in Latin America. First and foremost, the riches from the commodity boom of the 2000s were not always used prudently. While leaders throughout the region made inroads in tackling poverty, they often failed to implement badly needed economic reforms to diversify away from commodity exports, establish incentives to develop new industries or help make private sectors more competitive.

In some countries, such as Venezuela, there was no movement away from a top-heavy dependence on oil exports. Oil accounts over 90 percent of Venezuelan exports and is the major source of the government’s revenues. When oil was over $100 a barrel, as it was during part of the Chávez years (1999–2013), it was relatively easy to pump money into social programs.

When oil plummeted in mid-2014, Hugo Chávez’s successor, Maduro, was left with a brutal reduction in cash flow. This worsened an economic landscape in which the private sector was already decimated by socialist edicts, nationalization of certain enterprises, price controls and a driving out of many foreign companies. Greater state control of the economy left Venezuelans without many of the basic staples of daily life, such as diapers, milk and toilet paper, while Caracas has become one of the most violent cities in the world. In 2015, the economy contracted by 10 percent and is still falling. Inflation is set to rise over 700 percent, and there is a strong possibility that the country could default on its sovereign debt.

Other countries failed to make key reforms when they had the opportunity, including Argentina, Brazil and Ecuador, all of which are currently struggling to regain their economic footing. Moreover, infrastructure upgrades are still badly needed, including better sanitation systems, roads and railways. Similarly, Brazil’s hosting of the 2016 Summer Olympics will provide a major test for a country undergoing a tough recession.

The second factor that is hurting the left in Latin America is corruption. As the left rose, new political parties and their leaders replaced often corrupt right-wing and center-right governments. Venezuela was particularly notorious for the “misplacement” of oil money, but governments in Argentina, Ecuador and Bolivia have long had major issues in this area. The problem now is that the former leftist political outsiders have become the new establishment, and have fallen prey to the same problems that come with being in office for long periods of time.

Brazil clearly fits this situation. Many Brazilians saw Lula’s election in 2003, and his leftist Workers’ Party (PT), as a turning of the page, from the old corruption of past rightist governments to a fresh new team. But over time, the PT fell into the old pattern of business as usual: the passing of money between big business and the political elite to get things done. For the PT governments, this meant that the state-owned oil company, Petrobras, became the center of government largesse and patronage.

Operation Car Wash, carried out by a strengthened judiciary and national police force, uncovered a multibillion-dollar web of corruption that involved both members of the ruling PT and members of other political parties, as well as high-ranking executives in a number of the country’s largest companies.

Although President Rousseff chaired the board of Petrobras from 2003 to 2010, she has not been indicted. However, another investigation over the breaking of budget rules has fueled a movement for her impeachment in the Congress and led to policy paralysis in Latin America’s largest economy. In response to this situation, many Brazilians have taken to the streets to demonstrate, with as many as 3.6 million people turning out on March 13, many demanding that the president resign.

Brazil’s political temperature only rose further later in March when President Rousseff offered former President Lula a position in her cabinet as chief of staff, an appointment that would give her mentor immunity from arrest.  This did two things: the President made herself look even weaker in the eyes of the public by making Lula a member of her cabinet and it is seen by many as a blatantly political move to protect Lula, which smacks of business-as-usual establishment politics. It appears that some people are above the law. She will be lucky to see the end of the year in office.

Corruption issues, including drug trafficking allegations, have also dogged President Maduro’s administration in Venezuela, and the scandals around the former leftist governments under the Kirchner husband-and-wife team were a constant staple in Argentina’s papers. Even Bolivia’s Evo Morales, who has been in office since 2006, has come under criticism for corruption; this was probably a factor in his being denied the option to run for a fourth term.

The last factor in the decline of the Latin American left is that voting publics have grown tired of politicians with outsized egos. Having postured as men and women of the people, leftist leaders are now perceived as more distant and, in some cases, as arrogant. Efforts to control the media and stifle criticism have also injected charges of autocracy into the political discourse.

While Brazil would not fit into this group of soft autocrats, the same cannot be said for Venezuela’s Maduro, Nicaragua’s increasingly heavy-handed Daniel Ortega and, to some extent, other leaders, like Ecuador’s Correa and Bolivia’s Morales. There is a price to this; if voters are given a chance, they will vote against long-standing leftist strongmen, as they now expect more from the political system and its leaders.

Looking ahead, much of Latin America faces slow growth, tighter public spending and the need for further reforms, especially in countries like Argentina, Brazil and Venezuela. Add corruption to this list and it is understandable that much of the public is angry. Latin American electorates now have higher standards in what they want from their leaders, and that impacts the left as well as the right. The current batch of leftist leaders should heed the words of Marx—Groucho, that is: “Politics is the art of looking for trouble, finding it everywhere, diagnosing it incorrectly and applying the wrong remedies.”