David Cameron May Have Just Saved the EU 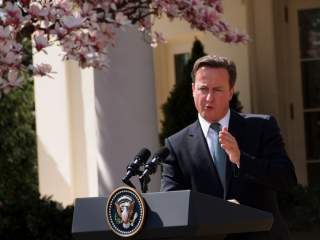 Even if it comes to nothing, the Brexit show has produced a remarkable chain of unintended consequences. David Cameron started the ball rolling in 2013. With his eye firmly focused on domestic politics, he decided to steal a march on his Labour opposition and disarm the anti-Europe UK Independence Party (UKIP) by calling for a national referendum on British membership in the EU. It worked. He returned to power as prime minister in 2015. But having promised a referendum, he had to call one. He did so for June 23, 2016. And having scheduled a referendum, he then had to try to renegotiate the terms of British membership. As that effort brought fundamental issues to light, other EU members looked to change their own arrangements. Now it seems as though Cameron’s cynical domestic political calculation has launched a reform movement within the EU that may well live on, regardless of Britain’s vote later this month.

For other EU members, Britain’s moves have provided less a guide than a prompt. Their needs differ markedly from Britain’s and are much more nuanced than London’s. Britain seeks freedom from EU constraints, the ability to keep its own currency and have the latitude to set its own monetary policy, to pursue more progrowth fiscal policies, to set its own labor rules and to control migration of EU citizens, refugees in particular. In contrast, others in the EU want a seemingly contradictory mix of freedom from and integration in the Union.

Italy, the most vocal thus far, proves an instructive case. Unlike Britain, Italy has all but given up on closing its borders to migrants. Rome wants greater EU integration, specifically a European-wide asylum system to help cope with the three hundred thousand North African and Syrian migrants it has already taken in at a cost of €3 billion a year. Not unlike Britain, Italy seeks greater latitude to pursue progrowth policies. In particular, Rome seeks the ability to run larger budget deficits than EU rules allow, to meet the expenses of migrants, conduct counterterrorism and support progrowth investments in its economy. But at the same time, Rome wants greater integration, in particular a eurozone budget and finance minister, presumably to get help from zone-wide (read: German) resources.

Rome has similarly pressed for a mix of greater distance and greater integration in financial matters. Prime Minister Matteo Renzi is deeply concerned that the huge overhang of questionable Italian bank loans could undermine depositors’ confidence, prompt a flight of capital to other eurozone banks, drain liquidity and end the country’s economic recovery. Renzi wants to bypass eurozone rules that prevent him from using public funds to restore confidence. Because of these rules, he has had to create an odd financial vehicle to marshal private money for the task. This so-called “Atlante Fund” may work, but Renzi clearly prefers the greater assurances of public funding. Even as Rome agitates for freedom from such EU rules, it also looks for greater integration, for instance proposing a capital markets union. Presumably, such an arrangement would put zone-wide resources (again, read: German) at the disposal of troubled members such as Italy. French Prime Minister Manuel Valls, no doubt aware of his own country’s financial weaknesses, has endorsed such a plan.

If Italy and other beleaguered eurozone members want freedom and integration on their own particular terms, they are far from alone. Berlin, for instance, has insisted on sustaining the euro as originally established. It has billed this insistence as a commitment to the ideal of European unity. But it also clearly benefits the German economy. A loosening of the currency arrangements would allow a German currency to leap in value, so much so that it would likely price German exports out of world markets. But while insisting in this respect that the EU supports German exports, and incidentally that the peripheral economies make all their financial adjustments through severe austerity measures, Berlin has refused to put its own finances at risk for the sake of Europe’s stability. In recognition of how Germany has positioned itself, Italy has proposed an adjustment of trade imbalances through an EU mechanism. Berlin has all but ignored the proposal.

To be sure, needs for reform have long festered in Europe without meaningful action. The proposals now surfacing may ultimately be bogged down in Brussels’ bureaucratic morass, but the threat of Brexit and Cameron’s negotiations may have provided enough of a shock to create lasting reform momentum. They certainly have provided Rome with a boldness it has lacked in the past. Given that the Italian economy accounts for as much as 17 percent of the eurozone GDP, Brussels will have more difficulty quashing the demands of the Italians than they did the Greeks. Even if Britain leaves and can no longer provide leadership for an EU reform movement, the departure of such an important economy may give Italy and others a club with which to beat the EU leadership. Either way, these unintended circumstances will substantiate a recent statement by former French president Nicolas Sarkozy. “Brexit or not,” he remarked, “we’ll need, in all scenarios, to deeply relaunch the European project.”