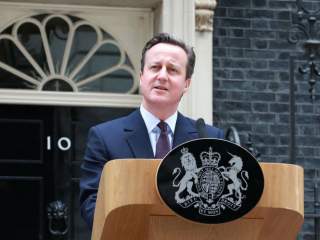 “BRITAIN HAS got its mojo back,” said the British Chancellor of the Exchequer George Osborne on December 7. He wasn’t doing an impression of Austin Powers. He was speaking to the Council on Foreign Relations about the British Parliament’s decision to bomb ISIS in Syria. Osborne explained to the council that he and the prime minister, his close friend and ally David Cameron, had tried to intervene militarily in Syria two years earlier and had been rebuffed by the House of Commons. “It was quite a striking moment,” he recalled, with sadness. “It was a moment when Britain was unable to follow the lead asked of it by our prime minister and the government.” But George Osborne felt better because now Britain was dropping bombs over Syria—for him a “source of real pride.”

He mentioned, almost in passing, that in 2013 he and Cameron had wanted to attack the forces of Bashar al-Assad, Syria’s president, rather than ISIS. Yet he did not dwell on that fact, because he knows that ISIS is Assad’s enemy, and most analysts agree that harming the Syrian government in 2013 would have been a boon to death-cult Islamists across the Middle East, especially those fighting under the black flag of the Islamic State. The chancellor preferred to skip past such thoughts. “We are going  with you as we reassert Western values,” he concluded to his American audience, “confident that our best days lie ahead.”

Most people know, however, that the British are not bringing much to the fight. The Royal Air Force (RAF) has already been attacking ISIS in Iraq since September 2014, and it’s hard to see what, if anything, that effort has achieved. Officials admit that British aircraft have carried out only 8 percent of the allied strikes, so the sub-Churchillian rhetoric about our proud nation never shirking its duties seems more like posturing than anything else.

In the days before the vote, Defence Secretary Michael Fallon emphasized that although Britain’s role would not be huge, the United Kingdom’s forces brought a “qualitative edge” to the war on ISIS. “The skill of our RAF pilots and the capability of our aircraft means the UK can conduct the most complex strikes—what is known as dynamic targeting,” said Fallon. He boasted about the United Kingdom’s Brimstone missile—“a low collateral damage, precision weapon that even the U.S. do not possess”—and something called a RAPTOR pod on our Tornado fighter jets, which is brilliant at tactical reconnaissance.

Such statements tap into the ineradicable British fantasy that we still punch above our weight in international affairs. Yet it’s fair to say the United States and other allies conducting 92 percent of the campaign could probably cope without the UK’s contribution. Britain’s hard power is not what it was, to put it mildly. During the wars in Iraq and Afghanistan, they were stretched to breaking point. In the last five years, David Cameron’s “austerity government” has set about cutting back the size and budget of the armed forces as part of its failed attempt to tackle the nation’s debt problem. The RAF has been dramatically diminished. For the attacks on ISIS in Iraq, Britain has deployed just eight Tornado jets from its base in Cyprus. Now, for the Syria missions, it has added only two more. The Tornado is an old bird, first developed in the 1970s. The RAF has in recent weeks deployed a further six Eurofighter Typhoons to take on ISIS. Yet the Typhoon is itself a symbol of British decline, built as it is in conjunction with the European Union so as to keep costs down. And the Typhoon can’t fire that Brimstone missile of which Fallon is so proud.

BRITAIN’S LATEST military escapade in Syria is less about hurting ISIS and more about symbolism—“a highly potent gesture,” as Bob Stewart, a former British colonel turned Conservative politician called it. Britain wants to show solidarity with France following the ISIS-inspired terror attacks in Paris on November 13, and to make British politicians feel they could once again stand tall in the world.

It’s hard to exaggerate quite how badly parliament’s rejection of Cameron’s first proposed Syria intervention hurt his pride, and the feelings of his nearest and dearest. It’s possible he felt emasculated by it. The rumor in Westminster was that Cameron’s wife, Samantha, who had been on a charity tour of Syria with Save the Children that March, had persuaded her man something needed to be done. Following inconclusive reports that Bashar al-Assad had again used chemical weapons to crush his opposition, the prime minister cut short his family holiday and came back to London at the end of August gunning for war.

After agreeing with Barack Obama that Britain would support American missile attacks on Assad strongholds, Cameron realized that his diplomatic reputation was at stake. Because of the number of dissenting voices within his own shaky coalition government, Cameron knew that he would have to secure the support of the then opposition leader Ed Miliband for a vote to attack Syria to pass. He duly invited Miliband to Downing Street to persuade him of the need for action. Miliband initially appeared sympathetic, then wavered and finally refused to commit, and in the end Cameron’s motion was defeated in the Commons by 285 votes to 272. It was the first time a British government had been defeated on a matter of war since 1782. The Cameroons—as those in Cameron’s circle are called—felt betrayed and angry. Nick Clegg, the then leader of Liberal Democrats and the deputy prime minister, said bitterly: “I could tell Ed Miliband was thinking this’ll be a good way of absolving his party of Iraq and embarrassing the Liberal Democrats. He had a choice to do something big or score points, and he chose the latter.” An unnamed government source was more blunt, telling the press that “Number 10 and the Foreign Office think Miliband is a fucking cunt and a copper-bottomed shit.”

Cameron collected himself on the day and made a dignified statement conceding defeat. “It is clear to me that the British Parliament, reflecting the views of the British people, does not want to see British military action,” he said. “I get that and the government will act accordingly.”

Cameron stewed, however. He was particularly upset a week later, when, at a G20 summit in St. Petersburg, Vladimir Putin’s spokesman said Britain was “just a small island . . . no one pays any attention to them.” Although nothing more than an off-the-cuff remark by a minor official, the prime minister took it as a grave insult. He responded by making an over-the-top speech about British greatness. “Britain may be a small island but I would challenge anyone to find a country with a prouder history, a bigger heart or greater resilience,” he said. The prime minister’s PR men said that Cameron’s patriotic passion had been stirred by the smart that Putin’s man had inflicted, and the right-wing press duly cheered the prime minister on. But his overreaction was no doubt initiated at least in part by the recent blow that Parliament had inflicted on his pride.

DAVID CAMERON was not always such a chest-thumping chauvinist. He used to make quite sensible noises about the perils of intervention. As leader of the opposition, he promised that he wasn’t some “naive neocon who thinks you can drop democracy out of an aeroplane at 40,000 feet.” As prime minister, however, Cameron and his colleagues felt that Britain must act as a force for good in the world—and if that means military intervention, so be it.

It was the civil war in Libya in 2011 that converted Cameron from liberal realist to liberal hawk. His biographer Sir Anthony Seldon calls the conflict “the formative experience in his premiership to date.” Seldon argues that Cameron had long felt a private animosity towards the Libyan despot, Muammar el-Qaddafi. In 1984, as a sensitive teenage public schoolboy, he had been shocked by the murder of the young policewoman Yvonne Fletcher by shots fired from the Libyan embassy in London.

He was even more horrified four years later by the blowing up of a Pan Am flight over Lockerbie in Scotland, which killed 270 people and was later proven to have been carried out by another Libyan, Abdel Basset Ali al-Megrahi. Cameron was disturbed that, in the 2000s, his predecessor Tony Blair had overridden British principles in order to bring in Qaddafi from the diplomatic cold. Blair had allowed the release of Libyan prisoners, including—most controversially—al-Megrahi. Cameron believed that British Petroleum, which had substantial oil interests in Libya, had played a part in the shady détente. After he became Prime Minister in 2010, Cameron ordered an investigation into the last government’s relationship with Qaddafi. Later that year, he refused on principle to attend a summit that Qaddafi was hosting.

When the Arab Spring sprang, and Libyan rebels turned on Qaddafi, Cameron felt what Seldon calls “a strong sense of Schadenfreude” at the Colonel’s plight. He shared the fast-spreading liberal hope that democracy had at last begun to flower in the Middle East. Cameron decided he had to support the Libyan rebels, and act quickly.