David vs. Goliath in the South China Sea: The Philippines vs. China 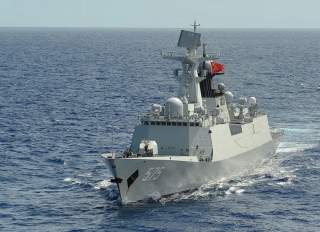 In a dramatic display of strategic naiveté, the Philippines decided (early-October) to suspend the repair and upgrade of its age-old airstrip on the Spratly island of Thitu (Pagasa to the Filipinos), among the biggest and most prized land features in the South China Sea, which can generate its own 200-nautical-mile Exclusive Economic Zone (EEZ). The airstrip is critical to the Armed Forces of Philippines’ (AFP) ability to project power and defend its maritime claims beyond its immediate territorial waters.

For years, the Philippines has not fielded even a single modern fighter aircraft; South Korea is expected to deliver twelve FA 50 lead-in fighter jets (worth $415.7 million) in the coming years, while the Philippine Navy has gradually beefed up its miniscule, antiquated fleet. Thanks to the strategic foresight of the late Filipino dictator Ferdinand Marcos (1966-1986), who recognized the importance of establishing permanent, defensible structures over contested features in the South China Sea, the Philippines has managed to exercise effective and continuous sovereignty over the island, which hosts a permanent civilian community and boasts its own mayor. But the advantage has been slipping away.

Manila tried to justify the controversial move by emphasizing the (supposed) importance of maintaining “the moral high ground” amid the country’s pending legal complaint, at a special Arbitral Tribunal in The Hague, against China’s expansive maritime claims, as well as increasingly aggressive posturing within the Philippines’ 200-nautical-mile Exclusive Economic Zone (EEZ). In short, the Philippines has prioritized an inherently uncertain legal maneuver at the expense of investing in tangible mechanisms, which can actually protect the areas under its control.

Meanwhile, Manila and Washington have faced renewed legal and political obstacles to the implementation of the recently concluded Enhanced Defense Cooperation Agreement (EDCA), which seeks to upgrade the U.S.-Philippine military alliance amid rising Chinese assertiveness. Other claimant states, from Vietnam to Taiwan, have accelerated their efforts at fortifying their position in Asia’s emerging maritime battlefront. Even nonclaimant states, such as Indonesia, have stepped up their efforts to counter what they see as a “real threat” (from China) to their maritime domain.

As Jay Batongbacal, a leading maritime expert in the Philippines, recently told me, the Philippines’ case at The Hague, contrary to the position of some Filipino officials, “is not a slam dunk”. China has consistently refused to recognize the jurisdiction of any international body over territorial delimitation and sovereignty-related issues. No wonder, Beijing has adamantly rejected the whole arbitration process, accusing the Philippines of unnecessarily provoking a crisis by internationalizing what it sees as an essentially bilateral territorial dispute, which should be resolved primarily through diplomatic channels.

With China boycotting the whole arbitration process, and refusing to even clarify the exact coordinates of its notorious “nine-dash-line” doctrine, it is far from certain whether the Philippines can expect an expeditious, conclusive adjudication, which could tangibly support its claims in the South China Sea. Even if the Philippines manages to secure a favorable legal outcome, China can simply ignore it. After all, the arbitral tribunal is neither designed to conclusively settle sovereignty-related issues, nor does it possess a compliant-enforcement mechanism to ensure the proper implementation of its final decisions. Ultimately, China is more interested in de facto—rather than de jure—domination of the Western Pacific, which it treats as its natural backyard.

At best, a favorable outcome would simply enhance the Philippines’ “moral case” against a rising maritime power—China (which has, so far, withstood external diplomatic pressure on issues that it considers “core interests,” from the maritime disputes in the Western Pacific to the intensifying anti-Beijing movements in Hong Kong, Xinjiang, Taiwan and Tibet).

In a nutshell, the Philippines’ legal strategy makes sense so long as it is part and parcel of a broader strategy to protect the country’s maritime claims amid China’s day-to-day operations aimed at changing facts on the ground. Theoretically, it would have been best if the Philippines leveraged the threat of filing a legal complaint—rather than actually filing it—to bring China to the negotiating table, or, alternatively, jointly submitted its case along with like-minded states, such as Vietnam. But the legal maneuver has effectively become the Philippines’ primary weapon against an increasingly militarized maritime dispute with China.

Since the end of Cold War, the Philippines has been progressively overshadowed by its rivals across the disputed waters. As the former Philippine national security advisor Roilo Golez recently told me, “[For long] the AFP concentrated too much on internal security…[But] the security environment changed in the 1990s. The leadership should have seen China’s move towards the South China Sea [earlier].” Efforts at modernizing the AFP fell short of addressing the emerging threat within the Philippines’ EEZ, because as Golez points out, newly allocated funds “were [channeled to] minor items like field communications equipment, and night vision equipment,” rather than “ the procurement of big ticket items like multirole fighters and Navy assets”, which are crucial to maritime defense.

The Philippines has sought to compensate for its vulnerability, which became patently obvious after China wrested control of the Philippine-claimed Mischief Reef in 1994, by inviting U.S. forces back to the country. The United States dramatically reduced its military presence after the termination of the U.S.-Philippine Military Bases Agreement in 1991. China wasted no time exploiting the temporary power vacuum that the departure of American forces from Subic and Clark bases in the Philippines created. The Obama administration, however, has refused to clarify whether Washington will come to the rescue of the Philippines if a war with China erupts over the disputed features.

Meanwhile, the two allies have struggled to fully upgrade their military alliance, since constitutional restriction over the establishment of permanent U.S. military bases in the country have prevented the immediate implementation of the EDCA, which is ostensibly designed to enhance the Philippines’ minimum deterrence capability against China’s maritime designs. In recent days, U.S.-Philippine relations have been tested by the public outrage over the alleged killing of a Filipino citizen by a U.S. Marine. The incident has rekindled age-old concerns over criminal abuses by foreign troops. Nationalist figures and movements have also stepped up their opposition to what they see as a violation of Philippine sovereignty by the presence of American troops on Philippine soil. Leading Senators such as Miriam Defensor-Santiago have called for the Visiting Forces Agreement (VFA) to be scrapped, while others have called for a review of the bilateral agreement. Criminal jurisdiction continues to be a sensitive political issue in the Philippines, since the 1998 VFA stipulates that the host country does not have full jurisdiction over criminal cases involving American troops. The alleged killer is currently in the custody of American authorities (aboard the warship USS Peleliu) in Subic, who have sought to dampen the political fallout of the incident by promising a full and thorough investigation.

With China stepping up its construction activities—having built a military airstrip across the Woody Island (Paracels) and building a similar facility on the Fiery Cross (Spratly)—other rival claimant states, including Taiwan, have fortified their position. For instance, Taiwan is building a $100 million port on Itu Abu (Tai Ping to Taiwanese), which already has a well-maintained military airstrip. The new port, expected to finish by 2015, could accommodate coast guard cutters and heavy naval frigates. Taiwan is also upgrading the airstrip to accommodate its Hercules C-130 transport planes, while finishing an ambitious project of surveying the entire South China Sea through high-resolution satellite imagery. This would give Taiwan a more complete picture of the developments across disputed features, providing valuable intelligence for legal and military contingencies.

Unlike the Philippines, practically all other South China Sea claimant states have maintained robust, high-level dialogue with Beijing. Chinese president Xi Jinping has yet to hold a formal dialogue with his Filipino counterpart, Benigno Aquino, who is entering his final years in office. And there are no signs that such an event will take place anytime soon. Interestingly though, Japan, a major strategic partner of the Philippines, has vigorously pushed for a dialogue between Prime Minister Shinzo Abe and Xi. Reports suggest that Abe has agreed to acknowledge the disputed nature of the Senkaku/Diaoyu islands in the East China Sea in order to secure a historic meeting with the Chinese leader. The Philippines will carefully follow the Abe-Xi meeting, since any rapprochement between the two Asian powers could have implications for the Philippines’ efforts to secure maximum external support against China.

To resolve the recent oil-rig crisis, Vietnam engaged in a proactive diplomatic offensive, culminating in the visit of Vietnam’s Politburo member Le Hong Anh to Beijing in late-August. Since then, bilateral tensions have subsided, with both countries seeking to enhance existing crisis-management mechanisms to avoid a similar crisis in the future. Back in 2012, the foreign ministries of both countries established a hotline, which covers a comprehensive set of issues including maritime disputes. In 2013, Vietnam’s Ministry of Agriculture and Rural Development and China's Ministry of Agriculture also set up a hotline to prevent risks and disputes concerning fishery resources. Most recently, the two countries, according to Vietnamese officials, have also agreed to establish a hotline between their defense ministries. Based on recent conversations with a Vietnamese diplomat, it is clear that the real challenge is to operationalize these mechanisms during an actual crisis: during the mid-2014 oil-rig crisis, which sparked huge protests across Vietnam and brought the two Communist countries dangerously close to an armed conflict, there was limited utilization of the existing hotlines. It remains to be seen how the new reported hotline between the two defense ministries will prevent a similar crisis, but it is clear that Vietnam is committed to using all possible diplomatic instruments to avoid another major showdown with China.