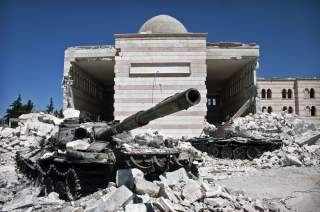 While all the attention in recent days has been focused on the brutality of the Islamic State in Iraq and Syria (ISIS), an al Nusra Front attack on Shi’a Lebanese worshipers in Damascus has further destabilized the region by increasing the possibility of Sunni extremism expanding inside Lebanon.

On February 1, a bomb exploded on a bus carrying Lebanese pilgrims to a Shi’a holy Shrine in Damascus, killing nine people. This was a rare occasion when innocent Shi’a pilgrims visiting Syria from Lebanon were deliberately targeted. A leader in al Nusra Front, a Sunni group competing for power with ISIS, said the blast was meant to punish Hezbollah, and the Shi’a by extension, for killing Sunnis in Syria during the more than three years of civil war.

The attack demonstrates a number of worrying developments: Not only is it clear that Nusra is dragging Lebanon into the war in Syria, but the blast also shows that the larger regional Shi’a-Sunni conflict is deepening. Second, the attack could be an attempt by al Nusra Front to show that despite ISIS’ recent fame and notoriety, it too is still powerful and relevant. The Nusra Front is affiliated with Al Qaeda, a group that helped spawn ISIS and is now its competitor. As ISIS becomes more brutal— and, as a result, captures the world’s attention— Al Qaeda has attempted to distance itself and claim that it is a moderate alternative.

The bombing also has important implications for the Shi’a.

Although the Syrian civil war has arguably made Hezbollah a more powerful regional force for Shi’a, its strength has also caused the party and movement to become a target of Sunni groups that fear Shi’a influence is expanding disproportionate to the sect’s numbers. In most states in the Arab world, the Shi’a are a minority to the Sunnis, yet the Shi’a now have deep footprints in four Arab capitals –Beirut, Sanaa, Baghdad and Damascus. Hezbollah’s leadership has deliberately avoided initiating violence against the Sunnis in Lebanon, preferring instead to appear as the more reasonable force compared with Sunni groups such as ISIS.

Since the war in Syria began, the very real danger of the conflict spilling into Lebanon proper – not just along the border with Syria – has been great. Now with the increasing power of extremist Sunni groups inside Syria, that day has come. There is continuous fighting in the Bekaa Valley, located about 60 miles from the capital Beirut.  After losing territory to Hezbollah and Syrian government forces, Sunni extremists have resorted to cross-border attacks to secure passage ways in Lebanon for weapons needed to fight in Syria.

In August 2014, ISIS and al Nusra Front fighters conducted a cross-border raid and took more than 20 Lebanese soldiers hostage. To date, four of the Army hostages have reportedly been executed.

Since then, the Lebanese Army has been engaged in battles against an array of Sunni militants in the eastern Bekaa Valley. Most recently, it pushed back militants trying to take over an army post in Tallet El Hamra. A few days earlier, the military ambushed militants trying to infiltrate a Lebanese army checkpoint  in Arsal, a predominantly Sunni town located 77 miles from Beirut.

In a bid to destabilize the country further, the Sunni militants have also attempted to target Shi’a strongholds. For example, in October 2014, a fierce battle took place between members of al Nusra Front and Hezbollah near the town of Brital, a Hezbollah stronghold. The fighting, which lasted several hours, followed al Nusra Front’s targeting of several Hezbollah military outposts, which resulted in deaths and casualties on both sides.

One source from Al Nusra explained that the strategic location of Brital was not the only reason behind the attack. Rather, the group was also seeking revenge for the way the Lebanese Army and Hezbollah are treating Syrian Sunni refugees in Arsal.

After the attack against the Shi’a in Damascus last week, Abou Malek al-Shami, the emir of the Nusra Front in Qalamoun, a city in northern Lebanon, said in a statement posted on his Facebook page that this was a “clear message for those who are assaulting Sunnis.”

“Hezbollah played a substantial role in supporting the vicious (Alawite)  regime and shed the blood of Sunnis in Damascus... our response had to be brutal,” he added. These statements, along with the deliberate targeting of Shi’a pilgrims, confirm the sectarian nature of the attack.

The attack occurred two days after Hezbollah leader Hassan Nasrallah delivered a speech accusing the al Nusra Front of being linked with Israel. It would not be far-fetched to interpret this Nusra Front attack as a direct response to Nasrallah’s statements and to Hezbollah’s deep involvement in the Syrian conflict, which has been crucial for helping President Bashar al-Assad stay in power.

The Damascus attack reflects a new trend in the Levant of deliberately targeting the Lebanese Shi’a performing their religious duties. A decade ago similar attacks in Iraq led to a full-scale sectarian war that continues to this day. Although most of Lebanon has thus far managed to avoid being pulled into the Syrian war, attacks like the one Damascus mean that Sunni radical groups will continue to grow and directly threaten the stability and security of Lebanon.