Deal with Russia, But Don't Be Too Eager 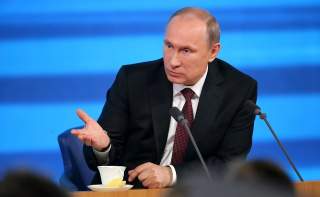 In negotiating with Russia, the first thing President Trump will need to do is lower expectations. His statements during the campaign have left him with a remarkably weak initial bargaining position. Talleyrand told junior diplomats, “Don’t be too eager!” Trump’s public eagerness to meet with Putin and his promises to quickly strike a deal put the Russian leader in the driver’s seat.

On top of that, Trump has already done more to weaken the credibility of NATO—a key Kremlin goal—than years of Russian covert operations. However welcome such behavior may be to Putin, he will have formed a view of Trump as a neophyte, another Berlusconi, someone to befriend, exploit and possibly blackmail later with compromising information collected by his spy agencies. So a first step will have to be to row back, disavow past statements and reestablish some leverage.

On concrete policies, the top priority must be shoring up NATO. Even before this presidential campaign, the credibility of Article 5 was at a low point. Since Ukraine focused the minds of Western leaders, all have recognized that (1) the United States will not use nuclear weapons to defend the Baltics or other frontline NATO states, and (2) NATO’s conventional defenses at the border are hopelessly outgunned by a potential Russian invading force. Trump’s equivocation on whether he’d go to the aid of an attacked NATO member has further weakened the alliance. Were Putin to seize the opportunity and order a hybrid operation to destabilize a Baltic government, and were NATO to fail to respond seriously to such an attack despite the invocation of Article 5, that might well be the end of the alliance. However Trump might try to spin this, he would go down in history as personally responsible for the destruction of the Western postwar order. To avoid this, he will need to convey clearly to Putin that the United States remains absolutely committed to defending the Baltics against any such attacks and to accelerate increases in the troop numbers, equipment and readiness of NATO forces around Russia’s borders.

On Syria, there may be room for Trump and Putin to claim a “breakthrough” that was in fact occurring anyway. The U.S. policy of supporting moderate rebels to oust Assad is in effect dead, at least for the moment. If, after some resolution in Aleppo, Russia judges that Assad is secure, perhaps it will devote more effort to defeating ISIS—and the two presidents can announce an alliance against terror. President Putin recently made a point of thanking the United States for its help with security over the Sochi Olympics, which suggests increased intelligence sharing on international terrorism might be something he would value.

On Ukraine, Trump could offer a personal commitment to block any proposed admission of Ukraine or Georgia to NATO for as long as he is in office. Such a personal commitment would not require a formal NATO agreement based on consensus of the members. In a rosy scenario, Putin might be persuaded in return to back a stabilization in Eastern Ukraine. The problem is that President Obama very likely already made such a personal commitment not to support admission of Ukraine and Georgia to NATO—and this clearly was not enough for Putin. Still, perhaps the desire to ease the Donbass-related sanctions is stronger at this point.