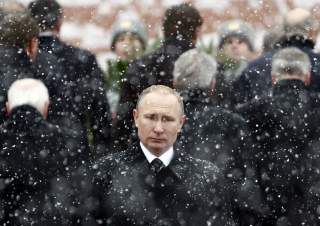 THE CURRENT low point in U.S.-Russia relations echoes the worst days of the Cold War. In March 1983, President Ronald Reagan called the USSR an “evil empire,” provoking a bitter reaction from Soviet leader Yuri Andropov and the Politburo, which declared in June that the U.S. media was at the “highest, most hysterical pitch.” In September, a MIG fighter shot down Korean Air Lines Flight 007, which had strayed into Soviet airspace, killing 269 innocent people. In November, according to a declassified top-secret U.S. intelligence review, Andropov put Soviet nuclear forces on a “hair trigger,” fearing that the United States was about to launch a first strike under cover of the NATO military exercise “Able Archer.” Recent studies suggest that the November event was not as dangerous as often portrayed, but experts agree that the risk of inadvertent war was extremely high. Fear of a nuclear war unleashed by miscalculation, Russian insecurity or an accident in time of crisis was a factor that pushed Reagan and Margaret Thatcher to engage the Russians to end the Cold War.

This June, at the St. Petersburg International Economic Forum, Vladimir Putin angrily denounced the “hysteria” in Washington and in the U.S. media. Again, bitter accusations and scorn abound. Both U.S. and Russian experts now agree that once again there is a heightened risk of unintended nuclear war—much higher than in the early 1980s—but this danger is not as widely perceived as it was back then. There is less awareness, less alarm. Few people know as much about nuclear policy as William J. Perry, a former secretary of defense. He has been on a crusade this year, warning, “We are starting a new Cold War. We seem to be sleepwalking into this new nuclear arms race. . . . We and the Russians and others don’t understand what we are doing.”

The risk of nuclear miscalculation is now higher than at any time since the Cuban Missile Crisis, due to increasingly lethal technology and the breakdown in almost all official mechanisms of bilateral communication since Russia’s annexation of Crimea. Yet that is only part of the story. In the 1980s, few could imagine today’s advances in robotics, artificial intelligence, data processing and geospatial analysis. The complex interactions and tightly coupled systems linked to modern nuclear arsenals—early-warning and command-and-control systems—have made accidental war more likely. Moreover, the Russians and Americans have to face new nightmare scenarios, like a terrorist hacking a nuclear command-and-control center or a ballistic-missile submarine.

If the Kremlin received intelligence of a possible U.S. attack, it could reasonably expect to have no more than seven to ten minutes to assess the information before Moscow was destroyed. Washington would not have much longer, and the new president is untested in crisis. In place of the regular contacts and civil discourse established by the Reagan-Gorbachev Summit in 1985, Washington and Moscow now have frequent dangerous military encounters.

It is a depressing picture: America and Russia seem to be blindly repeating the errors of the past, creating a nuclear déjà vu even more menacing than before.

THERE IS again a great chasm in the worldviews of Washington and Moscow. We now hear a call to train more Russia experts, just as in the early 1980s, to help the U.S. government understand the way Moscow thinks, the nature of its perceptions, its cognitive universe and the sources of its behavior. The scholar Stephen Blank argues that Russia experts must be trained to counter the Kremlin’s “constant, unceasing information war” directed against the United States and virtually every European government. To understand Russian tactics and policies, Washington needs to be able to “think like a Russian.” Sen. Mark Warner, the ranking Democrat on the intelligence committee, has taken to studying Russian history in order to investigate ties between President Trump’s campaign and Moscow.

Russians themselves suggest that Americans fail to understand not only their interests, but how to work with them. The late Vitaly Churkin, Russia’s ambassador to the UN, commented privately about U.S. officials in conflicts over Libya, Syria, Ukraine and Crimea: “They just don’t get us. They’re not dealing with us the right way.”

How would Washington “get” the Russians? How should it deal with them in “the right way”? In 1983, negotiation expert William Ury and I were asked to facilitate meetings of the Harvard-Soviet Joint Study on Nuclear Crisis Prevention, which included senior experts and top former officials at the level of the U.S. chairman of the Joint Chiefs of Staff. We knew Churkin back then as a bright analyst who would soon become the spokesman of the Soviet Ministry of Foreign Affairs. Gorbachev was still a little-known new Politburo member from the agricultural hinterland.

In some of our first tense conversations, we presented the Russians with a negotiation tool we call a “Partisan Perception Chart”—a summary of the “state of mutual accusation” that shows the grievances of two sides placed side-by-side. We used it to start a dialogue, to build a shared, fact-based understanding and a modicum of trust in a group that met regularly for off-the-record conversations from the nadir of U.S.-Russia relations in 1983 through the fall of the Berlin Wall. We began with a frank conversation about the past and who allegedly wronged whom, who deceived whom, who lied to whom, who violated what agreements and what international norms. We convened a series of meetings with the actual participants of the Cuban Missile Crisis—among them, Robert McNamara, Andrei Gromyko and Fidel Castro. For the first time, we heard all three points of view and learned that the Soviets had, in fact, gotten nuclear warheads into Cuba; that Castro had called for a preemptive nuclear strike against the United States; and that the Soviets had tactical nuclear weapons, which all agreed would have been used against the 180,000 U.S. troops ready to invade had President Kennedy given the order. We came closer to a full-scale nuclear war than we ever knew.

THE CHART we made in 1983 to begin a conversation with the Russians looks a lot like the one my colleagues and I have just redesigned in 2017. Like last time, each side sees the other as the aggressor, as provoking a new arms race, as invading sovereign states and violating human rights. “We are losing potential by blaming everything on Earth on each other,” Kremlin spokesman Dmitry Peskov told Fareed Zakaria in March. Not quite everything. And there are some new twists, the most striking of which would not have arisen in Soviet times: both sides now see the other as interfering in each other’s elections. The United States is still coming to terms with the U.S. intelligence assessment that Russia conducted an influence campaign in the 2016 election, seeking to harm Hillary Clinton and favor Donald Trump. The Soviets never accused Washington of interfering in their elections because there were no serious elections. Russians now point to U.S. violation of their sovereignty when Americans helped Boris Yeltsin’s come-from-behind win in 1996. The United States officially and openly helped their preferred candidate Yeltsin—whom Bill Clinton called “ol’ Boris.” He got the help of expensive American consultants and the IMF. Washington continued to support preferred opposition candidates in “Color Revolutions” in Georgia, Kyrgyzstan and Ukraine. The Russians consider the latter case a U.S.-backed “coup.”

There are also some important differences in Russian and American values. The Russians are now more conservative on both foreign policy and social issues. They seek stability in the Middle East, in contrast to Soviet efforts to overthrow Third World regimes and build utopian Marxist-Leninist socialist societies. They deride the Bush era’s neoconservatives and Obama’s liberal internationalists as utopians engaged in ill-conceived regime-change efforts to create democracy in the Middle East. Such campaigns, they argue, have created chaos and havens for terrorism. In the words of Deputy Prime Minister Dmitry Rogozin, “The U.S. handles Islam like a monkey handles a grenade.” Polls show an all-time high in anti-American sentiment among Russians, due not only to the Kremlin’s state media propaganda but also to some real differences in social values. The Russian Orthodox tradition is more conservative on gender and other social issues, which has led American conservatives like Pat Buchanan to praise Putin for “planting Russia’s flag firmly on the side of traditional Christianity” (see 2017 Partisan Perception Chart).

Back in the 1980s, we facilitated a process in which both sides could air their grievances, challenge the other side, correct inaccuracies and then move beyond their emotionally charged, opposing positions to begin to address critical underlying interests. We made use of humanizing folk wisdom from our respective cultures, like the Native American saying not to judge another “until you’ve walked a mile in his moccasins.” The Russians are famous for their down-to-earth proverbs, which helped bridge the gap in difficult moments.

Today, the annexation of Crimea, the downing of Malaysia Airlines Flight 17 and the atrocities in Syria have brought trust to a rock-bottom low. Even those well disposed to dialogue believe that Moscow has violated the INF Treaty. Back in 1983, the outlook was similarly dismal. The Soviets invaded Afghanistan in 1979, and hundreds of innocent civilians were killed, including a U.S. congressman, when a Soviet fighter shot down Korean Air Lines Flight 007. Cultural and other exchanges were halted. Most Americans saw only the face of a brutal, subhuman enemy. Soviet spokesmen accused Reagan and his advisers of “madness,” “extremism” and “criminality.”