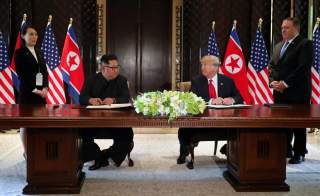 Despite chatteratti commentary to the contrary, when it comes to blocking the further spread of nuclear weapons, the Trump administration’s taste for nuclear truculence could be a plus. It’s hard-line against Iran’s and North Korea’s nuclear programs affords America an opportunity to set higher nonproliferation standards sorely needed for the rest of the world. Meanwhile, its efforts to upgrade America’s strategic forces could give Washington leverage to get Moscow and Beijing to curb their most threatening strategic activities.

First, Trump’s push to get Iran and North Korea to forgo enriching uranium and the reprocessing spent fuel—two activities known to bring states within hours of making nuclear explosive materials—could be used to create more general rules about what constitutes peaceful nuclear activity. One of the original shortcomings of the Nuclear Nonproliferation Treaty (NPT) was its vagueness regarding what nuclear materials and activities are far enough from bomb-making to be permitted. Although debated for years, this question was never fully resolved.

At the time of the NPT’s signing in 1968, those favoring enriching and reprocessing for nonnuclear weapon states had the upper hand. The only condition everyone agreed to was that these activities had to be conducted under international inspections. A half-century later, though, after the not so peaceful nuclear efforts of NPT signatories such as Taiwan, South Korea, Romania, North Korea, Iraq and Iran, universal support for such laxity lost ground.

In 2009, as a condition for civilian nuclear cooperation with the United Arab Emirates (UAE), Washington required Abu Dhabi to forego enriching and reprocessing. Four years later, Washington made the same demand of Taiwan and got South Korea to defer its interest in enrichment and reprocessing as well.

Then, a year later, the Iran nuclear deal was cut. It severely restricted Iran’s uranium enrichment program and forestalled any Iranian effort to reprocess. These Iran deal restraints are time limited. But they constitute the first time since 1968 that all of the nuclear weapons state signatories of the NPT (the United States, Russia, China, the UK and France) clarified what was peaceful under the NPT. They all agreed that there was no unrestricted right under the NPT to engage in reprocessing and enrichment and that these activities, in fact, were suspect.

In this regard, the Trump administration has taken an even firmer position. As Secretary of State Mike Pompeo emphasized before the Senate Foreign Relations Committee in May, the United States expects Iran and Saudi Arabia to forgo enrichment and reprocessing just as the UAE has. On this point, the Secretary has the clear support of at least two other senior Trump officials who work on nuclear-security issues at the highest levels. As they and others have recognized, what is peaceful under the NPT can only be so considered if attempts to divert them to make bombs can be reliably detected early enough to intervene before any weapons are built. This simply is not possible with even modest-sized reprocessing or enrichment plants.

In dealing with Iran, the Trump administration should double down on this point with Saudi Arabia, Jordan, Turkey, the UAE, Morocco and Egypt, (all of which either have nuclear cooperative agreements with the United States or have discussed such cooperation). It also should do so in East Asia as it works with Seoul, Tokyo and Beijing on the North Korean problem. The White House knows that any denuclearization agreement with Pyongyang must assure the North Korea ends its enrichment and reprocessing activities.

Assuming negotiations with Pyongyang will take some months, and possibly more, it would be helpful to spotlight the advantages of at least shuttering reprocessing in the region. China’s nuclear-power expansion is slowing down. Beijing is talking about building a commercial reprocessing plant, but it hasn’t found a construction site that its public will accept. Japan won’t start its costly reprocessing plant at Rokkasho for at least another three to four years and South Korea says it will build no new additional reactors and plans to get out of nuclear power entirely. President Trump, meanwhile, has called for terminating the Department of Energy’s costly effort to fabricate surplus weapons plutonium to fuel U.S. commercial power reactors. Securing decisions to pause the recycling of plutonium in each of these countries would make sense.

This, then, brings us to Trump’s other nuclear initiative that could foster greater strategic restraint—the Pentagon’s planned upgrades to our strategic forces. Given the growing number of new Russian and Chinese missiles and Moscow’s and Beijing’s deployment of new, offensive military-capable satellites, the Pentagon aims to catch up with nuclear and nonnuclear missiles and an assortment of stealthy, maneuverable and offensive satellites of its own. The general idea is to keep our military competitive with the Russians and Chinese. What precisely we are competing for, however, is less clear.

One answer floated in the President’s Nuclear Posture Review is that enhancing our strategic capabilities can afford us leverage to get the Russians and Chinese to reduce theirs. The review spotlighted America’s deployment in the 1980s of ground-launched intermediate-range cruise and ballistic missiles in Europe, which persuaded the Russians to eliminate their intermediate ground-launched missiles with the United States under the Intermediate Nuclear Forces (INF) Treaty of 1987.

How might we compete to cap or close out strategic military competitions today? With new, more capable missiles, the United States could get the Russians and Chinese to consider useful missile limits; with more capable satellites, needed space control rules.

China’s growing arsenal of nuclear and conventional ground-launched missiles can target our aircraft carrier task forces and overseas military bases. Our missile defenses alone cannot deal with the ever increasing number and quality of these missiles (China has the largest number of ground-based, long-range missiles in the world). Russia, meanwhile, has been modernizing its nuclear missile force and has violated the INF Treaty to threaten our European allies.

These challenges help explain why the Pentagon is pushing the development of new nuclear and nonnuclear missiles along with high-speed hypersonic missiles that can punch through Chinese and Russian missile defenses—developments Moscow and Beijing oppose. Russia, however, fears Chinese influence over Siberia, is redeploying Russian missiles to its Pacific region, and has quietly suggested that any “new” INF Treaty has to account for Beijing’s growing arsenal of missiles. China, meanwhile, wants Russia to reveal and limit its nuclear missile holdings and is eager to reduce U.S. missile capabilities.

It would make sense for Washington to work these Chinese and Russian worries by proposing an INF-like treaty that would include China or by cutting a separate deal with Moscow that would prohibit INF missiles in Europe but allow them in Asia. The later ploy, which could be floated in a summit Trump has proposed with Putin, might increase Chinese interest to secure a new INF-like agreement.

Roughly, this same approach could be taken to forge needed international space controls to help prevent China or Russia from threatening space Pearl Harbors against critical U.S. and allied satellites. These satellites serve as the eyes, ears and nervous system for the operation of U.S. and allied conventional and American strategic nuclear forces. Of particular concern are new Chinese and Russian maneuvering satellites (with “claws”) that will soon be deployed to clean up space debris and service existing satellites. Useful for peaceful purposes, these also could stalk crucial U.S. and allied satellites and move in to destroy them before our military could take effective defensive or counter-offensive actions. President Trump’s just released space policy recognizes these threats and reserves the right for America to “counter” these threats if “deterrence” against them “fails.”

The Pentagon is now redoubling its efforts to develop stealthy, maneuvering spacecraft to dodge such attacks. It also is designing much more dispersed, survivable satellite systems. Unfortunately, most of these new satellites won’t be deployed for another decade. More important, even when they are, we still will rely heavily on older, more vulnerable satellites that Russia and China could knockout with “stalker” satellites. These older, critical satellites could be destroyed well before the United States could take appropriate defensive actions.

Avoiding this will require clarifying space rules of the road that would authorize any state to clear zones near their most important satellite systems before an effective attack to knock out any system of satellites might be launched. These controls might be combined with more traditional bans on other anti-satellite and space-weapon systems. It may be difficult to get Russia and China quickly to agree to such rules but we should clarify the shared security benefits of all nations doing so for their own security as the Pentagon upgrades America’s space satellite and control capabilities.

Is taking a hard-line against enrichment and reprocessing or competing to cap or eliminate strategic threats without risk? No. But even riskier still is pleading for restraints alone or arming and threatening others without offering safer alternatives. Dealing huge and winning on strategic security requires doing both.

Henry Sokolski is executive director of the Nonproliferation Policy Education Center and the author of Underestimated: Our Not So Peaceful Nuclear Future. He served as deputy for nonproliferation policy in the office of the U.S. secretary of defense from 1989 to 1993

look at each others before signing documents that acknowledge the progress of the talks and pledge to keep momentum going, after their summit at the Capella Hotel on Sentosa island in Singapore June 12, 2018. They are flanked by Kim Yo Jong, sister of North Korean leader Kim Jong Un, and U.S. Secretary of State Mike Pompeo. REUTERS/Jonathan Ernst