Dear Allies: The Free Ride Is Over 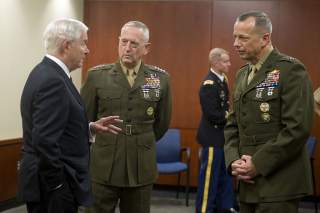 It may be hard, but it is not impossible for a confirmed and now old civilian like me to give advice to General James Mattis. Mattis has been a U.S. Marine for more than four decades and has just assumed the post as secretary of defense in the Trump administration. After all, he required a waiver in order to qualify for the job, and I would have been eligible without one.

To begin with, I would remind Secretary Mattis why we want a civilian to be in charge of the Defense Department. There are plenty of generals (and admirals) in the department who can give military advice to the president and manage the force. What is needed is a civilian who will worry about more than just the organizational health and military capabilities of the armed services. That person must also prioritize the financial and human resources the services need to perform their duties. We want resources invested in defense kept to a minimum because we have other public and private uses for them. Taxpayers, the families of service personnel, and all citizens concerned about individual liberty need representation in defense decisions. The military component of those decisions is already there in abundance.

Second, I would remind Secretary Mattis why we have the U.S. Marine Corps—the organization to which he devoted his adult life and which duplicates every one of the contributions made by the Army, Navy and Air Force. It is not just because the U.S. Marines performed heroically in both World Wars and in recent conflicts. It is also because Americans believe in institutional overlap and competition. Four air forces are better than one for innovation and combat performance, and so are several armies and a couple of navies. Resist the call for centralization and joint projects. We need more eyes on every problem. Centralization gives you giant projects like the Joint Strike Fighter and no alternatives when you need them.

Third, don’t waste your time on acquisition reform. There is never going to be a flawless acquisition system that works on the cutting edge of technology and meets all cost and scheduling promises. We need the advantage that the most advanced weapons give our forces, and that requires taking risks and accepting failures. Don’t fall for the frauds of management fads or the siren call of creating a Silicon Valley–like organization within the department. Instead, feed the complex network of defense laboratories, nonprofits and contractors that have kept us ahead for decades. The only stimulus they need is the inherent rivalry of the services as weapon buyers, and as protectors of their own technological futures as the preferred warriors of the nation.

Finally, pay attention to the guidance of the person who nominated you. It is long overdue for us to expect our allies to do more and contribute to their own defense. President Donald J. Trump is right that too often we have been overly eager to take a bad deal so long as it justifies the need for additional force structure. It is the requirements of our defense, and not that of rich allies in Europe and Asia, that should support the maintenance and deployment of our forces. As the Second World War showed, it is often an advantage to be behind rather in front of our allies. Neither NATO or our other alliances should be vehicles by which allies get a free ride on the backs of U.S. taxpayers and soldiers.

It is more important for you to be a skeptic than a civilian. As a U.S. Marine, you surely helped sell the U.S. Marine position. As a combatant commander, you obviously advocated for the needs of your command. Now, you must confront the pitches, the claims of the policy partisans, the U.S. Marines, the combatant commands and the rest of the defense spectrum. The way to do that is to stir competition within the department and seek fresh perspectives from outside the department. Interservice rivalry will do it from the inside, and I bet the commander-in-chief’s questions and tweets will more than do it from the outside.