Death Spiral or Not, Washington's Metro is a Total Disaster 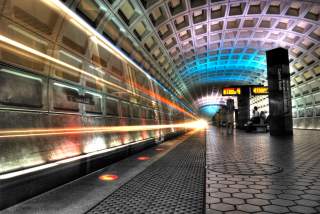 It’s a cardinal rule of crisis management: Don’t affirm a negative accusation, especially if it’s true. (See: “I am not a crook.”)

But Paul Wiedefeld, general manager of the Washington Metropolitan Area Transit Authority (WMATA), apparently never got the message. Recently, he felt it necessary to declare that “Metro is not in a death spiral.” Washington residents immediately knew they should be very concerned.

Whether you want to call it a “death spiral” or not, it’s undeniable that Washington’s Metrorail system is in dire shape. Ridership has fallen every quarter since its peak in 2009—remarkable, given that the Washington metropolitan area’s population has grown nearly 8 percent since 2010. Metrorail’s most recent quarter saw ridership fall 11 percent from just a year ago, signifying that the decline is not just prolonged, but precipitous as well.

Metro admits that its ridership losses stem largely from poor service quality and reliability. Trains are late more than a quarter of the time, and only 48 percent of Metrorail riders said they are satisfied with their experience. These trends will only get worse, due to service disruptions caused by Metro’s SafeTrack repair program, the inconvenience of which has recently reduced ridership by 20 percent on its most-traveled Red Line in a single day. Many of these riders will likely never return, given their frustration with the subway and the convenience of other alternatives.

Unsurprisingly, Metro’s problems manifest themselves in its budget. The general manager’s proposed budget for 2018 projects that WMATA—both rail and bus services—will run a $290 million shortfall. Even that is a suspiciously rosy scenario, since it wishfully assumes a 0 percent raise for WMATA’s unionized workforce and discounts the cost of future pension liabilities.

This projected deficit comes after factoring in nearly $1 billion in subsidies from local governments. Metro is further subsidized by the federal taxpayers. This includes Federal Transit Administration grants, direct appropriations from Congress—a gift to Metro that is unique among U.S. transit agencies—as well as a transit subsidy for the federal employees who constitute about 30 percent of WMATA’s riders. Billions more in federal and local funds are being poured into building out the system’s Silver and Purple lines—even as the existing system catches on fire routinely.

This lavish taxpayer support masks Metro’s significant problems and subsidizes its continued slide. Viewing itself as “too big to fail,” Metro counts on always being bailed out by taxpayer dollars. Thus, it has little incentive to operate efficiently or meet customer demands. Instead, Metro officials focus on demanding more money from both local residents and federal taxpayers, who will likely never ride it.

Not only have these subsidies allowed poor service to continue, but they’ve produced high costs and exceptional bloat, even for a public agency. On a cost-per-passenger-mile basis, WMATA’s rail service ranks as the most expensive major Metro system to operate in the country. Its heavily unionized workforce is truly massive—totaling over 14,500 employees, more than twice its similar counterpart in Chicago. Indeed, Metro has the most full-time employees per rider of any major heavy rail system. Worse, Metrorail has more administrative workers relative to its ridership than any other system by a long shot—roughly five times that of its peer rail lines in New York, Philadelphia, Boston and Los Angeles.

This featherbedding is extraordinarily costly—especially considering that total compensation for WMATA employees averages out to nearly $125,000 apiece. Additionally, it’s extremely difficult for WMATA to discipline ineffective and even negligent employees. That’s a sweet deal for underperforming workers, but a nightmare for taxpayers and riders—as evidenced by Metro’s current debacle.

There’s a bright side, however. WMATA’s previous plan to regain riders was simply to wait until gas hits $5 per gallon again. So it’s encouraging to see that officials are increasingly aware that corrective action is needed.

Wiedefeld has made some laudable proposals in his budget for the next year to address the $290 million shortfall. They include shedding one thousand jobs and focusing service on peak hours. Yet even these steps have generated staunch political pushback from riders and union members, and thus are unlikely to be enacted as proposed.

Separately, WMATA board chair Jack Evans has proposed turning over management to the federal government (as did the Washington Post), but the Feds’ abysmal record on managing Amtrak and, until 1987, Washington’s airports suggests that this is an ill-advised path to go down.

Instead, one truly remarkable inclusion in the public agency’s budget points toward the right direction: privatization. Mentioned only in passing in the budget’s presentation section, privatization should not be a footnote to the agency’s approach; it should be the approach.

Given the immense cost and unaccountability of Metro’s current workforce, Metro should do all it can to bring in private firms to do maintenance and operations work. Private companies would compete to provide services more inexpensively. Meanwhile, Metro would have the ability to set quality standards and remove the firms if its standards are not met. This establishes a far superior incentive structure that would yield myriad benefits to riders and taxpayers.

One final thought: emerging technologies, such as driverless vehicles, are throwing the future of mass transit into uncertainty, so now is an opportune time for Metro to define its future. Taxpayers should question whether it truly makes sense to continue dumping billions in subsidies into a system that may be largely obsolete in a decade or two.

Either way, both commuters and taxpayers deserve better from WMATA, and they will continue to be disappointed if WMATA is enabled to continue down its current path. Whether that will lead to a rapid death spiral, slow decline, or increasingly untenable taxpayer bailouts is anyone’s guess, but we know from Metro’s current state that it won’t be pretty.

Michael Sargent is a research associate in The Heritage Foundation’s Roe Institute for economic policy studies.