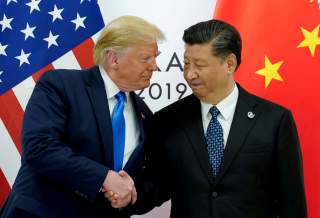 Washington’s decision to call off the trade war with China—or at least to take down a few notches—was a smart move. The bilateral relationship is changing and not in America’s favor. Maintaining global influence and preserving prosperity for the American people requires substantial reforms at home and a more careful role abroad, especially regarding China.

Unfortunately, the Chinese people remain captive to an authoritarian government. Freedom House gives the “people’s republic” the lowest ranking on political freedom and nearly as bad on civil rights. The United States scores near the top.

Nonetheless, the pace of China’s economic reforms is blistering. The latest Doing Business report from the World Bank showed a massive improvement of 8.64 points on a 100-point scale, from 65.00 in the 2018 report to 73.64 now. China closed nearly half of the gap with the United States (82.75) in a single year.

If national power grows from economic freedom and a welcoming business climate, resilience comes from diversification and robust buffers. China’s Belt and Road Initiative expands potential trading partners, particularly throughout Eurasia, which is home to 70 percent of the world’s people. A vast network of Eurasian energy pipelines, including a crude oil pipeline from oil-rich Iran through Kazakhstan to China, is insurance against a long-feared maritime blockade. America’s recent trade posture only encourages China to double down on diversification.

Furthermore, America’s leverage through the payments system is being challenged. China, Russia, and European countries are developing alternative payment models. They could bypass the United States and the SWIFT system that currently dominates financial transactions.

America’s numerous sanctions have created a ready pool of potential early adopters for not only alternative payment systems but also another reserve currency. It is no longer unimaginable that China could gain market share. Beyond those subject to sanctions, the world’s most populous nation is bound to exert an economic gravity in its neighborhood.

Moreover, China’s buffers are both military and economic. Beijing remembers its defeats in the disastrous Opium Wars and so has invested heavily in anti-access, area-denial weapons systems to guard against foreign military meddling. Also, China’s high national savings rate lets it export capital to borrower countries like the United States. Those Savings generate resilience, just as equity-rich businesses can weather tough times better than heavily-indebted competitors.

America’s public and private sectors, on the other hand, have low savings rates relative to domestic investment. Washington’s national borrowing and indebtedness drove the trade deficit, not the other way around, and it makes the United States vulnerable.

As China and other high-savings countries become more attractive for investment due to better business climates, they will export less surplus savings. The end of the global savings glut will push up interest rates. The net interest cost of the U.S. federal government’s debt—already projected to grow from $382 billion this year to nearly $1 trillion per year by 2029—could spike.

Furthermore, if China’s yuan became an alternative reserve currency, that would make this worse. Less demand for U.S. debt instruments as the basis for international trade and financial markets would increase the interest rates Americans would have to pay to keep borrowing.

It gets worse. America’s unipolar moment is over, and China is a peer competitor. In some ways, in terms of population and some measures of economic output, China has already passed the United States. Changes in great power relations are perilous as all sides adapt to new realities. Flashpoints could include North Korea, Iran, Taiwan, a maritime accident, or a trade war.

China’s ownership of $1.1 trillion in U.S. federal debt is also concerning and has eerie echoes of a time when America had geopolitical debt leverage. In 1956, U.S. President Eisenhower issued an ultimatum to heavily indebted Britain and France during the Suez Canal Crisis: “no ceasefire, no loan.” This sped the end of Britain’s already fraying empire and diminished its power for decades.

China’s leaders are unlikely to make such a threat unless they are sure it will have the desired impact. Imagine, however, if America faced stiff headwinds—from a recession, from reserve currency competition, the end of the global savings glut, or from a debt crisis—that pushed up U.S. interest rates. If that happened, relatively minor Chinese actions could create much larger problems for the United States and weaken America permanently. Some collateral economic damage would fall on China, but under certain circumstances, Beijing may decide that the benefits outweigh the costs.

Congress’ first obligation is to preserve the U.S. republic. For better or worse, the United States has little ability to undermine China’s business climate and payment system reforms. If Washington did try to intervene in China, doing so may only sour relations—or worse even trigger what America should be trying to avoid.

What Americans can do, however, is to get U.S. government debt under control, curtail subsidies for private borrowing, improve the U.S. business climate, and address dysfunction at home. The United States still has time to get its house in order, but perhaps not much. And that’s without a clumsy approach to China.

Kurt Couchman is a Washington, D.C., based economist with a nonprofit advocacy organization. He previously held positions with Defense Priorities and in the offices of several Republican members of the House of Representatives. Views expressed are his own and should not necessarily be taken to reflect those of any current or former employer.