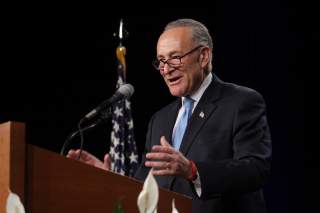 Sen. Chuck Schumer (D-N.Y.) announced this month that he would oppose the international agreement to prevent an Iranian nuclear bomb, the first Democrat in the Senate to do so. “I believe we should go back and try to get a better deal,” Schumer said. “The nations of the world should join us in that.”

And then Sen. Schumer got a surprise: two high-level groups with stellar credentials, one of senior nuclear scientists and the other of retired generals and admirals, came out in support of the deal.

Schumer’s position was not strong to begin with. In response to the senator’s assertion that the United States could get international support for new talks, Secretary of State John Kerry, who negotiated the deal, said, “Are you kidding me?”

If the United States walks away from this deal, other nations will not follow. Why should they? U.S. allies support the deal we already have. In fact, they negotiated it. The United States worked in lock step with the United Kingdom, France, Germany, Russia and China. If this deal goes down the drain, there will be no other deal.

Without this deal, the need for U.S. military action to stop an Iranian bomb becomes more likely. This is inevitable. And by rejecting the diplomatic approach our allies support, the United States would find itself isolated and taking military action alone.

Yet the main flaw in Sen. Schumer’s position is that it fails to acknowledge that the deal is actually very good, and there is simply no reason to reject it. The deal verifiably and peacefully prevents Iran from building a nuclear bomb for the next 15 years at least. Without the deal, Iran could build a bomb in about a year. This is not a close call. The deal is the best option we have by far.

The facts matter, and they are clear. The letter from dozens of the nation’s top scientists, published in The New York Times, found the deal to be “technically sound, stringent and innovative,” and said it “will provide the necessary assurance in the coming decade and more that Iran is not developing nuclear weapons.”

These scientists have deep experience in nuclear weapons design, nonproliferation, verification, and international negotiations. The group includes seven Nobel laureates, five National Medal of Science recipients, a former director of Los Alamos National Laboratory—where the first nuclear bomb was developed—and one of the designers of first hydrogen bomb. This is a first-rate group.

Retired generals and admirals also released a letter supporting the deal, published in The Washington Post, stating that the agreement is “the most effective means currently available to prevent Iran from obtaining nuclear weapons.” They also said that winning international support for military action against Iran, should that become necessary, “would only be possible if we have first given the diplomatic path a chance.”

In addition, the Iran deal has been endorsed by 100 former U.S. ambassadors, 60 national security experts, former Israeli intelligence and military officials, and U.S. allies in the Gulf Cooperation Council.

Schumer now has some explaining to do. On every point that he has raised, the generals and scientists have an answer.

For example, Schumer says that, “the 24-day delay before we can inspect is troubling.” The scientists counter: “Concerns about clandestine activities in Iran are greatly mitigated by the dispute resolution mechanism built into the agreement. The 24-day cap on any delay to access is unprecedented, and will allow effective challenge inspection for the suspected activities of greatest concern: clandestine enrichment, construction of reprocessing or reconversion facilities, and implosion tests using uranium.”

Schumer also says that, “the agreement would allow Iran, after ten to fifteen years, to be a nuclear threshold state with the blessing of the world community.” He fails to mention that inspections under the deal would last beyond 15 years, and that Iran is already a threshold state and could build a bomb much sooner without the agreement. As the military leaders state, “if the deal is rejected by America, the Iranians could have a nuclear weapon within a year. The choice is that stark.”

On every level, the Iran deal makes sense. The United States is much better off with the deal than without it. Sen. Schumer and others need to consider the recent statements by scientists and generals—these are exactly the kind of qualified experts that Congress should be listening to.