Debunked: Why There Won't Be Another Cold War 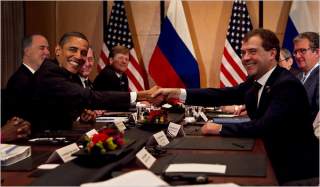 In the wake of the ongoing crisis in Ukraine, talk of a “New Cold War” is in vogue. Even experts who studied the Soviet Union and Russia from the depths of mutually assured destruction and détente to the fall of Communism now say that it will be decades again before “normal” relations between Russia and the West can resume. We disagree.

The “New Cold War” narrative goes something like this: Vladimir Putin’s invasion of Ukraine has constituted an unpardonable violation of the European security order and of international law, which will poison relations with the United States and Europe to the point that any hopes of rapprochement would be dashed. Putin himself is determined to make contempt for Western values—and anti-Americanism especially—the centerpiece of his regime’s official ideology. Further, he has successfully brainwashed the younger generation of Russians with these views. For the foreseeable future, we will at best achieve limited agreements on issues like arms control, only because of a grudging recognition that without them, we risk destroying each other and the world. It’s the Cold War and détente all over again.

True, relations between Russia and the West have become severely strained, and the sources of that tension—principally the catastrophic situation in Ukraine—may not change any time soon. But we believe the “New Cold War” narrative misreads both Russia and the West, especially when it comes to the generation that has fully come of age after the collapse of the Soviet Union and the end of the original Cold War.

As members of that generation in the United States, both Russia watchers with experience working on second-track diplomacy and living and working in Russia, we suggest that it is a mistake to define the current conflict primarily through the lens of the previous one. The declaration of a “New Cold War” has come too soon, and the label does not fit.

In geopolitical terms, there are clear differences between the current conflict and the Cold War: the absence of a global ideological dimension to the conflict; the prevalence of tension in the post-Soviet space versus in other regions; and the much greater relative power of non-Western states (China, India, Brazil and others) that have, so far, refused to take sides. As others have noted, such differences do not preclude a renewal of Cold War–type relations between the United States and Russia, with considerable spillover effects for Europe and other regions.

Yet what distinguishes the contemporary situation from the conflict that governed the second half of the twentieth century—and the reason this cannot be called a New Cold War—is the profound difference in interpersonal relations.

Far from a new iron curtain of mutual hostility and distrust descending between East and West, Russians and Americans can in most cases travel back and forth, interact freely with one another and seek to find common ground on the toughest issues through mutually respectful dialogue. During recent visits to Moscow, we each found Russian experts at all levels open to engagement; with the younger generation especially keen to offer helpful and insightful analysis of events in Russia, Ukraine and Russia’s relations with the West.

Make no mistake: “helpful and insightful” is not a euphemism for “pro-Western.” Just as anywhere else, attitudes among the rising generation of Russian experts run the gamut. But they are professional, intelligent and willing to engage with Americans, even if that engagement does not yield an immediate meeting of the minds. They also have (so far) been willing to speak openly and on the record without fear of official repercussions, a clear distinction from a time when even a banal conversation with foreigners was fraught with complications and outright risks.

And thanks to the Internet and international voice calling, our dialogues are able to continue with great ease—something that Cold Warriors never dreamed could be possible. Through social media, we exchange messages and links with Russian friends and colleagues on a daily—sometimes even hourly—basis. This is not just the usual trope about the Internet making the world smaller. On Facebook and Twitter, we see the images that Russian peers curate when their Russian friends are watching and without them necessarily thinking about the Americans in the room. But it also means we see each other’s birthdays, children and family vacations. Our relations with our Russian counterparts are therefore fundamentally deeper and more complex than were those of the previous generation of American and Russian experts.

This is all to the good, because while such dialogue cannot alone deliver an end to the current conflict, it helps ensure that tensions will run less deep and for less long. Still, it takes a critical mass of expert voices on both sides to maintain such engagement and to have any impact on official opinion or policy in Moscow and Washington. In this respect, the United States is unfortunately less well equipped than it should be. Ironically, the disappearance of Cold War–era U.S. government programs for supporting Russia-related scholarships and travel to Russia has decreased the number of young Americans wishing to join our field and the number of opportunities available to them. As a result, the voices of the Cold War generation still predominate.

Without a renewed appreciation of the importance of preparing American experts to work with and on Russia, the interpersonal connections that have made such a difference for us and our Russian colleagues will atrophy and disappear. Then we really will find ourselves in a new Cold War.

Matthew Rojansky is Director of the Kennan Institute at the Wilson Center in Washington DC. Rachel S. Salzman is a Doctoral Candidate in Russian and Eurasian Studies at the Johns Hopkins School of Advanced International Studies.