A Decade After the Georgia War 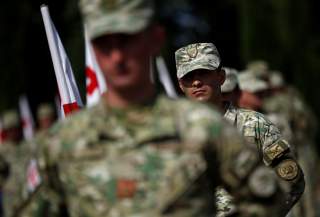 Image: Soldiers stand at attention during a ceremony at the memorial cemetery of the Georgian soldiers killed during the war with Russia over the breakaway region of South Ossetia in 2008 in Tbilisi, Georgia, August 8, 2017. REUTERS/David Mdzinarishvili