December Elections in Libya Risk a Return to Civil War 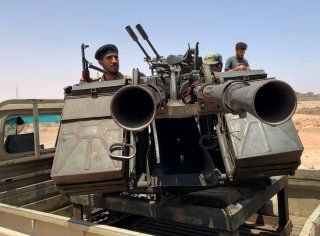 Just over ten years after the demise of Muammar Gaddafi, his once “reform-minded” son turned internationally-wanted war criminal announced he will run for president of Libya in elections scheduled for December 24. Seif al-Islam’s political aspirations demonstrate just one of many problems with holding elections next month. If he is allowed to run, Libyans who fought against Ghaddafi may boycott or turn to violence. Conversely, if Seif’s candidacy is rejected by the electoral commission that is expected to determine his eligibility, supporters of the old regime could boycott or disrupt the elections. The same dynamic will occur now that Khalifa Haftar, the eastern-based commander who wantonly attacked Tripoli in 2019, has entered the race. Given this hyper-polarized climate and the risk of substantial violence, it is far more prudent to delay elections for a certain period until several critical issues are resolved.

There are three fundamental questions that must be agreed by Libyans: what—or which—institutions are being elected, in what sequence, and who is allowed to run.

Once the United Nations-created forum to resolve these issues faded last summer, the wily eastern-based politician Aguila Saleh seized the vacuum, drew up an electoral law, and jammed it through the House of Representatives (HoR) he chairs. In over seven years, the HoR has rarely met officially, in part because of the manner that it was elected and a subsequent boycott by many of its members. Even so, the UN Special Envoy endorsed Saleh’s law without trying to negotiate its contents with other Libyan political bodies that retain significant influence, particularly in the west. Saleh—yet another likely presidential candidate—remains under U.S. sanctions for disrupting the last attempt to bring Libyans together in 2015.

Absent an agreed-upon constitution, the current electoral laws call for a presidential system with a weak parliament. The president would have full executive authority, can appoint a government, and be the commander and chief of the military. The military command is a post that Haftar sought before he attacked Tripoli in April 2019. Among the risks of electing a super-empowered president in a questionable election is that there would be one person, one vote, one time. (One only needs to look at Tunisia, the bright spot of the Arab Spring, to see how an elected president can quickly consolidate power, even without a strong military at his side.)

Sequencing the voting is also unresolved. The November 12 International Conference on Libya in Paris officially said presidential and parliamentary elections would be held “on December 24,” but some participants indicated that the election process would “start” on December 24. As of now, a first presidential round with multiple candidates will be held on December 24. Since no candidate is expected to win a majority, a second round will likely occur. Whether the parliamentary ballot will be held on the date of the first round, the second round, or even later remains unresolved.

Finally, and most controversially, is the identity of the presidential candidates. Seif, Haftar, and current prime minister Abdul-Hamid Dbeibah, who pledged not to run when he took office and is widely suspected of corruption, are deeply flawed candidates. According to the electoral commission, a candidate must “provide proof of a clean criminal record with no felony conviction,” and “must state his assets both in Libya and abroad.” But the commission itself is incapable of adjudicating these criteria. Seif is wanted by the International Criminal Court. Haftar, a long-time Virginia resident, is facing civil lawsuits for his army’s actions in Libya against dual nationals. These issues alone, not to mention orchestrating free and fair balloting across a country with a fractured security apparatus and where impartial observers cannot provide minimal assurance of fairness, call for a delay.

The United States and others argue that an on-time election is less risky than a delay since it would jeopardize the bargain made last year to hold elections as codified in a UN Security Council resolution. But that only makes sense if the elections are considered legitimate by most parties. Currently, there is no candidate capable of rallying supporters nationwide and it’s questionable whether they could even campaign across Libya. The likelihood of Libyans accepting the victory of a regional candidate is slim, especially in circumstances where the electoral laws and actual voting will be challenged if not disrupted entirely.

There’s also the matter of the thousands of foreign forces and mercenaries deployed across the country. Proponents of elections believe that only a new government can demand that these forces leave. But again, the prospect of a stable new government assuming such a role in the near future is unlikely. Russia will likely keep its Wagner Group mercenaries in the country regardless of the elections, and that poses a greater direct threat to U.S. and NATO interests than anything else in Libya. Moreover, the Russians are certainly preparing electoral interference as they do regularly against Western democracies.

Libya has come too far since ending its third civil war in mid-2020 to risk resuming violence or dividing the country with a rushed election. The original December 24 date emerged from an ambitious process that unfortunately failed. Deadlines are useful as forcing functions but not at the risk of provoking civil war. It is far preferable to enlist a new UN team and, with the support of the United States and its partners, reinvigorate intra-Libyan diplomacy among key actors and civil society to build genuine consensus over an agreed electoral law and set a new timeline that would begin the election process 90 to 120 days from December 24. There is no question that Libyans deserve the right to elect their leaders and that the public wants elections. But the international community has the responsibility to create the best possible circumstances for them to do so freely, fairly, and securely.

Ben Fishman is a senior fellow at the Washington Institute for Near East Policy and was Director for North Africa at the National Security Council during the Obama administration.