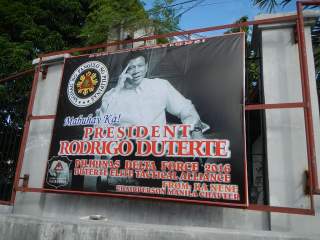 “I’ve realigned myself in [China’s] ideological flow … there are three of us against the world: China, Philippines and Russia. It’s the only way,” exclaimed Philippine president Rodrigo Duterte during his four-day trip to China. Not short of theatrics, he also bid “goodbye” to America, vowing “separation” from the Philippines’ sole treaty ally.

As far as rhetoric is concerned, we are witnessing potentially the biggest overnight volte-face in history of geopolitics. In a matter of months, the Philippines has gone from China’s leading regional critic to, at least verbally, a potentially ally, with the century-old U.S.-Philippine alliance suddenly hanging in the balance.

This was Duterte’s first major state visit, breaking with a long tradition of Philippine leaders visiting Washington and Tokyo ahead of Beijing. And he achieved practically everything he sought. Duterte managed to secure $24 billion in economic pledges from China. Around $15 billion are business-to-business deals between Filipino business tycoons, mostly of Chinese descent, and their mainland counterparts. The remaining $9 billion are soft loans, a third of which will be devoted to infrastructure investment in the Philippines, including Duterte’s home island of Mindanao, which has been racked by a four-decade-long conflict and the country’s highest incidence of poverty.

To Duterte’s delight, China also offered assistance to his signature “war on drugs” campaign, which has drawn heavy criticism from Washington and rapidly become a huge bone of contention in bilateral relations with Manila. The two former rivals also managed to arrive at a set of confidence-building measures in the South China Sea, including hotlines between their Coast Guard forces and a provisional joint fishing arrangement in the Scarborough Shoal. The neighbors are also negotiating a twenty-five-year military agreement, which allows Manila to purchase Chinese weapons on favorable terms. Slowly but surely, Asia hands in Washington are beginning to ask: “Who lost the Philippines?”

As I argued months earlier, the Philippines’ firebrand leader is interested in overhauling his country’s foreign policy. And this is precisely what he has been trying to achieve, albeit gradually. So far, speculations have focused on whether he will sever ties with America in favor of an alternative alliance with China. A more careful analysis, however, suggests that Duterte is more interested in engaging fellow Asian economies, particularly regional giants such as China and Japan. Meanwhile, he realizes the indispensability of his country’s alliance with America, especially for the powerful security establishment in the Southeast Asian country. Thus, the Duterte administration may eventually end up adopting a triangular balancing strategy towards Japan, China and America.

The Philippine leader’s erratic behavior and seemingly contradictory rhetoric has raised eyebrows at home and the world over, including in China. As one prominent Chinese scholar succinctly put it, “[Duterte] still could change his words in the future. . . . In the future, nothing is certain.”

Yet, the Philippines’ strategic recalibration—minus Duterte’s foul mouth and over-the-top tirades—isn’t without its own reasons. For four full years, the Philippines stood up to China like none of its neighbors. After the Scarborough Shoal crisis, which led to Chinese occupation of the Philippine-claimed territory, the Southeast Asian country made the unprecedented decision to take China to court. It was an extremely risky and lonely choice.

In response, China imposed a de facto investment siege on the Philippines. There were also restrictions imposed on Philippine banana exports as well as a travel advisory to dissuade Chinese tourists from visiting the tropical nation, which is home to one of the world’s most scenic beaches. This partly explains why the Philippines’ terms of trade with China have deteriorated over the years, Chinese tourist inflow has been anemic and Chinese investments in the country have been so limited. Astonishingly, the Philippines invests more in China than the other way around.

Against all odds, and repeated Chinese threats, the Philippines pulled off a stunning legal victory, with a tribunal constituted under the aegis of the United Nations Convention on the Law of the Sea nullifying the bulk of Chinese excessive claims in adjacent waters. And yet, the Philippines never received the kind of assurances and support it desperately needed from its allies, both during the arbitration proceedings as well as right after.

The Association of Southeast Asian Nations, the ultimate arbiter of the regional security architecture, even refused to mention the Philippines’ arbitration case and the final award in its pronouncements. Even the European Union was extremely tepid in its joint statement. Most countries around the world kept mum. Meanwhile, the United States mostly called for “calm and patience,” while refusing to clarify whether its Mutual Defense Treaty with the Philippines will apply in an event of Chinese aggression in the South China Sea. Despite the “Pivot to Asia” ballyhoo, America’s military aid to the Philippines in 2015 was even smaller than in 2010.

Thus, right after the arbitration award was issued, the Philippines confronted two stark options: risk all-out conflict with China (without clear backing of allies) or instead explore a modus vivendi with the Asian giant from a position of relative strength, since the arbitration outcome could still be leveraged in any bilateral negotiations. It is against this backdrop of strategic desperation that Duterte decided to go for direct engagement with China.

Reversion to the Mean

The problem with Duterte’s approach, however, is that he risked weakening the Philippines’ bargaining position by engaging in an unprecedented diplomatic tiff with America, mainly out of personal irritation over the latter’s open criticism of his antidrug campaign. Over the past few weeks, he has threatened to end all joint exercises with America, suspend any plans for joint patrols in the South China Sea and even abrogate existing bilateral security agreements. No matter how limited, Washington’s military support has always served as a critical “derivative deterrence” for the Philippines. His all-out diplomatic flirtation with China also didn’t help.

To be fair, Duterte and his senior officials have repeatedly clarified that the alliance with America will stand. In fact, as soon as he returned from Beijing, Duterte declared: “In the severance of ties you cut the diplomatic relations. I cannot do that. It is in the best interest of my country that we maintain [military] relationship [with Washington].” And so far, there has been no confirmed official request by the Philippine government to downgrade or sever military cooperation with America.

Although as part of a “grand bargain” with China, Duterte may consider slightly scaling back certain aspects of its bilateral military cooperation with Washington in exchange for Beijing’s concessions in the disputed waters. But if he fails to secure any tangible and mutually satisfactory modus vivendi in the South China Sea, it is possible that Duterte will pivot back to America.

Meanwhile, Duterte’s fruitful trip to Japan, America’s most important Asian ally, clearly showed that the Philippine leader isn’t interested in building an alliance with America at the expense of its traditional allies. To dampen China’s economic hold on the Philippines, Japan offered $19 billion in investment and loan pledges. Duterte also welcomed Japan’s offer to build rehabilitation centers in the Philippines in order to assist his war on drugs.

Japan is the Philippines’ leading investment and trade partner as well as the biggest source of development assistance. Since his days as mayor of Davao, Duterte has maintained cordial relations with Japan, a major investor in his home city. “Japan has really been our biggest helper,” Duterte claimed recently, providing some insights into which country he feels most comfortable with. “The fact is they are really so very kind.”

A grateful Duterte assured his hosts that he is not about to sever ties with America and that he is just seeking stronger economic ties with China. During his visit to Japan, Duterte also reaffirmed their bilateral cooperation in the realm of maritime security and ensuring a rule-based resolution of the South China Sea disputes. If anything, Japan can serve as a bridge between Duterte and Washington. By all indications, Duterte, so far, is interested in reviving economic ties with China, but not necessarily at the expense of old alliances. After all, he knows that he needs “all-weather” partners in an event of Chinese renewed assertiveness in Philippine-claimed waters.