Decisive Defeat: Why the U.S. Strategy for Afghanistan Didn’t Work 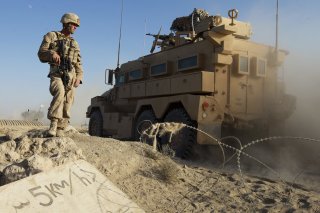 The Afghan military and security forces collapsed so quickly in the face of the Taliban advance this summer that even the Taliban seem to have been surprised. But as the twenty-year nation-building project comes to a disastrous close, there are a set of implications regarding both the Global War of Terror and America’s interventions in the Middle East that must be considered. There is a growing and increasingly well-established set of facts suggesting that America’s military interventions in the Middle East are inherently unviable and that this has been the case for up to twenty years.

In the early stages of the Iraq and Afghanistan wars, the United States was expected to leave after total victory was quickly accomplished. Once a decisive victory became unrealistic, mission creep introduced a new notion that could give a nation already questioning these ventures a reason to hold on longer.

In a special address broadcast into the homes of the American public from Fort Bragg shortly after winning a second term, President George W. Bush issued a new doctrine aimed at shoring up domestic support for the international military campaigns being waged under the banner of the War on Terror. Bush stated “[o]ur strategy can be summed up this way: As the Iraqis stand up, we will stand down. We have made progress, but we have a lot more work to do. Today, Iraqi security forces are at different levels of readiness.”

This revised goal implied that America could raise forces in the countries it invaded and that these forces would serve U.S. interests in the long term. This would be Washington’s best strategy for both retaining popular support for the wars and achieving long-term political changes that would suit U.S. ambitions. While the specific doctrine was retired not long after it was introduced, the premise loomed large in strategic planning moving forward.

Afghanistan’s army and police forces can be classified as what scholar Jahara Matisek described as “Faberge egg militaries.” Matisek, himself a professor of military and strategic studies at the U.S. Air Force Academy, defines these “Faberge egg militaries” as U.S.-trained militaries that are “expensive, shiny, and easy to break” when confronted by motivated insurgencies. While such militaries usually feature fairly competent special forces groups, their regular troops experience a catastrophic loss of effectiveness and military cohesion if the U.S. military is not fighting alongside them as co-combatants. There are many factors that contribute to this problem, but for Mitsek, looking back at examples from Iraq, Afghanistan, and Somalia, the issue lies in the fact that such militaries were built on the foundation of corrupt and dysfunctional states that the United States was unwilling to invest in outside of military assistance.

But other contributing explanations are worth examining. One issue that certainly begs interrogation is the issue of motivation. One civilian advisor to former Chairman of the Joint Chiefs of Staff General Joseph Dunford said the explanation he found compelling came from a Taliban member who said “[t]he Taliban fight for belief, for janat (heaven) and ghazi (killing infidels) . . . The army and police fight for money . . . The Taliban are willing to lose their head to fight . . . How can the army and police compete?” One could argue that the United States is doomed to create incohesive militaries if it focuses on creating non-ideological professional forces motivated only by nationalism in countries that have precarious relationships with the fundamental concept of Westphalian nationhood.

It should also be noted that this lesson was learned once before. The Iraqi Army fell apart in a very similar fashion after the U.S. military departed in 2011. ISIS fighters streamed across the Sunni Triangle and faced little resistance as forces from the Iraqi Army simply melted away. At the time, a consensus emerged in Washington that placed blame for the Iraqi military’s failure on two specific factors: the corrupt Iraqi political class and the impact of Shia sectarianism that emanated from Tehran and Baghdad.

This argument, as articulated even by Matisek, states that the integration of the Shia Popular Mobilization Forces (PMF) within the Iraqi military undermined their sense of purpose as the PMF groups are “more concerned with parochial interests and kinship ties” rather than loyalty to the Iraqi state. While the notion that corruption undermines military cohesion and capacity is certainly credible, I would argue that the latter argument is not.

The PMF, once re-established as an independent force, fought ISIS across Iraq—including in Sunni areas—and would have been involved in many other battles deep into al-Anbar Province but for the disapproval of the United States. Along the way, the PMF adapted and began recruiting members from other sects, including Sunnis. Some PMF groups have even fought in Syria. Regardless, the Shia-based explanation certainly helped American experts avoid having to confront questions about the basic viability of U.S.-trained armies in the Middle East.

Another approach to building proxy or allied forces in the region can be generally referred to as the “moderate rebel model.” This scenario includes a variety of specific concepts, but broadly, it is characterized by the United States arming, training, and providing varying levels of direct special forces and aerial support to existing irregular fighting groups. Two of the most prominent cases of the moderate rebel model of security assistance involve Kurdish fighting groups in Syria and Iraq.

Here, too, there is very little evidence that these groups can be trusted to effectively fight on their own. The Peshmerga in Iraq were nearly overrun by ISIS and were only able to avoid a catastrophic defeat in Erbil after they received significant support from both Iran and the United States. They also folded against the reconstituted Iraqi Army after the ill-fated and poorly timed secession initiative led by the Kurdistan Regional Government.

The Syrian Kurds would also likely not fare well in direct battle against the Syria Arab Army and its associated forces without U.S. intervention. However, that hypothesis is unlikely to be tested in the near future. While much of their current policies may be molded by their desire to bank favors with the world’s lone superpower, the Syrian Kurds have long known that an independent Kurdish state composed of their two disconnected and landlocked cantons in Syria, sandwiched between Syria and Turkey, is not realistic. They have generally avoided fighting with the Syrian army so far and have already begun discussing a reconciliation agreement with the Syrian government.

The example of rebel groups fighting the Syrian government may be the only successful use of the moderate rebel model. Before 2015, the Syrian rebels had made major advances throughout Syria and were even threatening Damascus. While their gains were eventually reversed by direct Russian intervention, part of the reason this effort was successful for a time was that the circumstances were different than those in other parts of the region.

The Syrian Arab Army (SAA), with a relatively Western mold and armed with outdated Soviet weapons, was fighting irregulars supported by the United States. This allowed the United States to dust off certain strategies that had been effective in the past. U.S.-supplied Stinger anti-aircraft missiles had been extremely effective—perhaps even the “silver bullet”—for the Afghan Mujahideen in their successful fight against the Soviet invasion. Here as well, the provision of advanced TOW anti-tank missiles to the rebels was so effective against the SAA’s tanks and armored personnel carriers that the rebels dubbed them “lion-killers” (Assad means lion in Arabic).

Another reason was that the United States stepped away from its stated goal of supporting only moderate rebels. More extreme, Taliban-esque elements with violent and decidedly undemocratic ideologies supplied much of the hardened fighters willing to die to advance against their enemies. Notably, this ideological component is typically absent in “Faberge egg militaries.” These groups were usually not themselves the beneficiaries of CIA-provided weapons but instead made alliances with more moderate groups that did receive them. One report from 2015 said that the advance of an anti-Assad coalition primarily made up of Islamist fighters, including those of the Al Qaeda branch Jabhat al-Nusra, was “strikingly swift—thanks in large part to suicide bombers and American anti-tank TOW missiles.” The Tony Blair Foundation, hardly a member of the “Quincy Coalition,” sounded the alarm about the advance made possible by TOW-missiles:

Where short or long-term objectives overlap, groups form coalitions regardless of ideology. . . . This shows that any attempt by international powers to distinguish between acceptable “moderates” and unacceptable “extremists” is flawed. Such overlaps are endless. In one battle in Jisr al-Shughour this year, Jabhat al-Nusra fighters were used as shock troops, with fire support from Western-armed rebels. Meanwhile, a Free Syrian Army group vetted and supplied with arms by the United States is reported as having lied about its collaboration with Jabhat al-Nusra. Western attempts to divide the rebellion into moderates and radicals have frequently encountered problems. Four groups reported to have been vetted and supplied with US anti-tank missiles are ideologically Islamist or Salafi-jihadi.