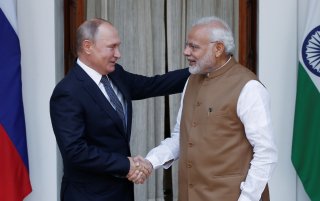 In another likely scenario, if China is emboldened by Russia’s success in Ukraine, its target will be Taiwan and not Indian territory. India’s robust force posture and retaliation after the Galwan face-off have effectively signaled the risks of engaging India in a conventional war. Also, India still prefers dialogue over confrontation with China; hence New Delhi does not want to be seen too close to the United States by aligning with it against Russia in the ongoing war. Ambassador Anil Triginayat, a former diplomat and board member of the Usanas Foundation, an Indian-based think tank, told me that India’s decision to chart its own path on Russia while standing against Chinese expansionism in the Indo-Pacific shows that New Delhi is not doing America’s bidding. Instead, India’s opposition to China is its own right and in defense of its territorial integrity, not as a member of any strategic alliance with larger geopolitical motives.

Also, if the West emerges powerfully in the ongoing crisis, discouraging China from expansionist adventures is again a favorable scenario for India. Alternatively, suppose the West emerges weakened with a loss of face due to Russia’s occupation and regime change in Ukraine. In that case, the West will be under severe pressure to save its credibility. It will have to stop China from its expansionist designs, once again a favorable situation for India. To counter China, the West will need India. Hence, India tends to worry less about U.S. displeasure over its neutral stand. Also, since India has strong ties with Russia, the West is likely to explore India as a mediator and peacemaker, which raises India’s global diplomatic stature.

Russia’s invasion and China-Russia’s authoritarian tide are likely to strengthen the right-wing political groups in the United States and Western Europe, facilitating the onset of conservative governments. New Delhi sees it as a favorable development as the right-wing governments will be less sympathetic to Pakistan and take a firm stand against Jihadi terrorism and radicalization. Also, they will be lenient towards India in matters of human rights violations and communication lockdowns in Kashmir. Over the last three years, India has been making robust outreach to Europe’s right-wing political heavyweights. When India was facing a global backlash for its communication and security lockdown in Kashmir, the Modi government gave a tour of Kashmir to fifteen right-wing members of the European Union (EU) parliament.

The ongoing war in Europe appears to be an extended venture, now dragging for months, if not years, involving multiple stakeholders. Even in the Western camp, many nations are arguably more assertive, taking initiatives independent of the line followed by the United States. Germany has already committed 100 billion Euros to military modernization but has been less bullish on banning Russian energy imports. Having already emerged as an influential military player in North West Africa’s counter-terrorism operations, France has displayed impressive leadership in attempting to achieve a diplomatic breakthrough in the ongoing crisis. Likewise, Israel offered to mediate. Japan is likely to militarize fast, given Chinese and Russian belligerence. The aforementioned developments align well with New Delhi’s vision of a multipolar world. The future world order will witness an active strategic and military involvement of hitherto relatively silent or regionally active entities like Japan, Israel, Germany, France, and Australia. Such a scenario may suffer from uncertainty and shades of anarchy; however, New Delhi prefers a multipolar world order over a hegemonical one as it diversifies its dependence. India visualizes engaging the aforementioned countries through robust bilateral initiatives.