Deep Strike Is Not the Future of U.S. Naval Power 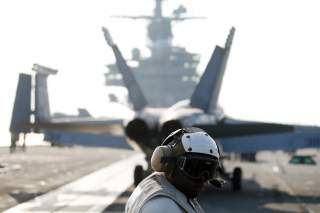 Writing in the March 12 National Review, retired Captain Jerry Hendrix asserts that the Navy, in order to retain relevance in the coming decades, must develop a long-range penetrating bomber. He argues that the latest national security and defense strategy documents require the Navy to “strike enemy capitals and other vital centers of gravity from range.” While the National Defense Strategy does call for the ability “to strike diverse targets inside adversary air and missile defense networks,” it does not mention the Navy specifically, nor does it specify how that is to be done. Certainly deep strike, as a capability of the joint force, is an essential tool in the nation’s military arsenal. But as an explicit mission for naval aviation, it represents both a blind alley and a potentially catastrophic opportunity cost for a service that is critically short of ships and other needed resources.

Strike warfare—that is, bombardment of land targets from the sea, and especially from the decks of aircraft carriers—has been an important mission of naval aviation since the fleet battle experiments revealed its potential in the 1920s and 30s, and highlighted by the Doolittle raid on Tokyo early in World War II. After the war, the Navy undertook a desperate effort to develop long-range nuclear strike in response to U.S. Air Force attempts to derail the Navy’s aircraft-carrier program. Convinced that the B-36 bomber was too slow and vulnerable to successfully penetrate Soviet defenses, Navy admirals believed that carrier-based aircraft would have the best chance, and proceeded to fund the development of a series of bombers from the hybrid jet/propeller AJ Savage to the supersonic A-5 Vigilante. A number of the aircraft designed for this work, such as the A-4 Skyhawk and the A-6 Intruder, also became workhorses of the fleet for conventional bombing.

There is a core logic to the Navy’s development of long-range strike aircraft that must be understood. In the early nuclear era, manned aircraft were the only available means for delivery. Each plane carried one or perhaps two bombs for what was probably, like the Doolittle raid, a one-way mission (the author of this essay was one of those pilots). Significantly, once the Navy developed the Polaris ballistic-missile submarine, naval aviation was gradually relieved of its nuclear mission. The aircraft developed for nuclear warfare were pressed into various roles for conventional operations: the A-3 Skywarrior became a tanker and electronic-warfare platform; the Vigilante became a reconnaissance aircraft; and the A-4, A-6 and A-7 became the airframes that did the bombing and strafing in Vietnam and later. Importantly, their range was not the critical issue it was when they had nuclear missions. Thus, for various reasons, when they had served out their service lives, they were replaced with the F-18, which had many survivability advantages but not as much range.

Just as the sea-based ballistic missiles replaced manned aircraft as nuclear delivery means, so the Tomahawk missile has replaced manned aircraft for deep-strike missions against heavily defended targets. Why risk aircrew lives or their potential as prisoners of war when missiles can do the job? Advocates of manned penetrating bombers cite the need for human decisionmaking on scene, but this hardly seems necessary in deep-strike missions, especially if missiles are equipped with artificial intelligence—although human crew will probably still be needed for troop support missions. In any case, the Air Force is developing the B-21 penetrating bomber, so why would the Navy need to duplicate that national capability? An unmanned, long-range strike aircraft makes somewhat more sense, but then again, why would it be better than missiles? Just from a back-of-the-envelope cost comparison, the United States could purchase 750,000 Tomahawk missiles for the price of the F-35 program. I suppose a new unmanned strike aircraft program would cost less—but still, if it only cost half, you can see the issue. We could saturate any defense system over and over with thousands of missiles for the cost of a few dozen stealth bombers.

Beyond the missile/bomber comparison, there is the overall issue of opportunity costs for the Navy. Given the projected budget environment, the Navy will be lucky to achieve its desired fleet size—whatever that turns out to be—in the next two decades. And it needs numbers of ships to achieve its true national mission of global combat readiness, deterrence and engagement, especially in view of massive Chinese naval expansion. Development of a new strike aircraft would seriously interfere with that effort. In any case, the Navy is developing a new operational concept it terms “distributed lethality,” in which its offensive power is spread out among a variety of combatants in the form of missiles, and is no longer concentrated in the carrier air wing. More missile ships appears to be the cost-effective answer to what some term “antiaccess/area-denial” (A2AD) systems developed by China and others. This approach is strategically more efficient, as increasing the number of missile-shooting ships not only increases survivable combat power, but allows the fleet to be in more places for engagement and deterrence and maintain a sustainable deployment posture. Funneling money into a new strike aircraft exacerbates the combat-capability-versus-presence dilemma the Navy now faces.

The issue of Navy relevance, and in particular aircraft-carrier relevance, is a bit of a red herring. The days of Air Force hostility to naval aviation are over, and only the Navy can maintain freedom of the seas. Distributed lethality will ensure the Navy is able to pose a formidable offensive challenge to anyone, either in or from the sea, but those forces will need air cover, which is where the carriers will remain needed for the foreseeable future. The logic and concepts of that mission require more space than is available for this essay, but as just one element, we can assume that at least some (if not most) of our national space resources will be destroyed or compromised in a high-end fight. Air-breathing platforms will be needed to replace them, and these will need to be protected. Aircraft carriers could very well be the only viable source of both the platforms and the fighter protection they need. Thus the Navy’s decision to configure its first unmanned carrier aircraft as a tanker makes sense; Hornets and Lightnings in their fighter-interceptor roles will need tanking for range and endurance. If the Navy wants increased range, the first place to look is longer-range air-to-air missiles. Russian-made variants outrange our best right now. If a new tactical aircraft is needed, it should be a modern air-superiority machine a bit like the old F-14 Tomcat, which was long range and carried many missiles, or perhaps an unmanned version. Such a fighter would not require the intense and expensive level of all-aspect stealth that a penetrating bomber would need, and thus would likely cost far less.

Robert Rubel is a retired Navy attack and strike fighter pilot. After commanding an F-18 squadron he spent twenty-one years on the faculty of the Naval War College, teaching planning and decision making, directing the Wargaming Department and for the last eight years serving as Dean of the Center for Naval Warfare Studies. In that capacity he designed and led the research project that supported development of the 2007 A Cooperative Strategy for 21st Century Seapower. He currently volunteers as an advisor to the Chief of Naval Operations on fleet design and architecture.