To Defeat Boko Haram, Give Peace a Chance 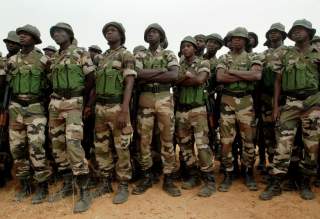 With as many as two thousand people feared dead in what is being called Boko Haram’s deadliest massacre to date, it is well past time for a new approach to countering violence in Nigeria and the broader region. The early days of the New Year leave little doubt of Boko Haram’s resolve to increase its campaign of violence in 2015. January headlines characterize the ambitious expansion of the group’s terror to include more kidnappings, the annexation of military bases and killings in neighboring Cameroon.

To date, the response by the Nigerian government has been militarized, heavy-handed and largely ineffective. Evidence demonstrates that this approach has done little to improve the situation, and in fact the increasingly abusive Nigerian security forces may be helping to fuel the expansion of Boko Haram. Violence against civilians starkly increased after the Nigerian government declared a state of emergency in May 2013, deploying thousands of government troops with enhanced authority. Under this state of emergency, four times as many civilians have been killed than in the previous five years combined.

Despite the failure of a military approach, the United States government seems inclined to double down, recently committing $40 million from the Global Security Contingency Fund to “train and equip” security forces from neighboring Cameroon, Chad and Niger in the effort against Boko Haram. This expenditure comes on top of preexisting Department of Defense-sponsored activities that between Fiscal Year 2009 and FY 2013 garnered $288 million for the ever-expanding “War on Terror” in the region as part of the larger Trans Sahara Counterterrorism Partnership (TSCTP).

Since becoming the latest inaugurated TSCTP country in January of last year, Cameroon has seen a sharp increase in U.S. security support resulting in its first airstrikes against Boko Haram last month. Washington’s increased interest in partnering with neighboring countries is indicative of its deteriorating relations with Nigeria over Washington’s criticism of the Nigerian military’s human rights violations as well as  frustration with Nigerian president Goodluck Jonathan’s slow response to the kidnapping of 200 Chibok schoolgirls in April 2014. Nigeria took exception to these accusations, and voiced discontent with the limited scope of U.S. assistance by canceling an American-run military training program last month, leaving Washington to pursue a more willing partner in Cameroon.

But, before the U.S. rushes to train and equip Cameroon’s forces and risks repeating the same mistakes, it should consider two things. First, Cameroonian forces also suffer from a spotty human rights record. Second, the assistance looks a lot like the problematic and ineffective deals Washington struck with Nigeria. Simply swapping out one country’s military for another – especially one similarly charged with human rights violations – won’t bring about different results. The solution here is not different government forces. Rather than pursuing the same policies that increase risks to civilians and have proven to fuel violent extremist groups, Washington must invest in the region’s people. What is needed now, more than ever, is increased support for community-driven, non-violent means of fostering peace and enhancing resiliency. And Nigeria’s local peace builders have a much better record than any other actor in the region.

In May of last year, Boko Haram launched a twin bomb attack in the city of Jos, Nigeria, killing 118 people. The bombing was a callous attempt to spark violent reprisals along ethno-religious lines as has happened previously.  This time stories just the opposite occurred, however. Instead of taking to the streets to riot and loot, young people patrolled their communities and attempted to reduce tensions among their peers. One group of young men went so far as to escort those in need, including a Muslim mother and her child requiring emergency medical assistance down what was considered to be a Christian-only street.

The critical factor here is that within Jos there is a strong, robust network of local peace builders and international partner organizations that have been working tirelessly to ensure meaningful interaction between various ethnic and religious groups that too often find themselves on opposing sides. These civil society efforts include training local government and religious leaders on conflict mitigation, activities that bring together Muslim and Christian youth, development of early warning and community response mechanisms to address conflict and mediating safe spaces for community leaders from different groups to discuss shared challenges.

Through the improvement of inter-communal relations at the local level, these peace builders have been able to achieve objectives, which the police and security forces failed to accomplish during episodic violence, including in 2001, 2008 and 2010. They have effectively prevented widespread reprisals and have started addressing the drivers of violent conflict in order to help calm long-simmering tensions.

At this point, the U.S. must realize that it has exhausted all military options in Nigeria, options which experts have long predicted would never be effective in achieving peace. It's time to put to rest the failed military approach and commit to identifying and supporting local peace builders and their organizations, as leading Nigeria expert, John Campbell, recommends in a recent Council on Foreign Relations report.

Rather than broaden the scope of a failing military partnership with Nigeria to include its “more cooperative” but equally problematic neighbors, the U.S. government must better support the only effective solution by prioritizing the resources and making the policy commitment required to put local communities at the heart of the response to violent extremism.

Kate Edelen is a Research Associate for Peacebuilding Policy at the Friends Committee on National Legislation. She recently returned from Nigeria, where she conducted research on the activities of local peace builders throughout Nigeria.

Allyson Neville-Morgan is the Legislative Associate for the Prevention of Violent Conflict for the Friends Committee on National Legislation. Working as part of the Peacebuilding Policy team, her work focuses on the prevention of violent conflict, mitigation of atrocities and protection of civilians.