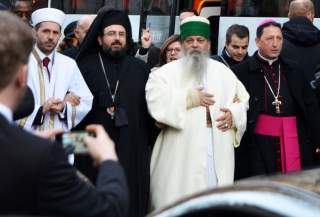 After the shooting in Copenhagen, police found a recording that made its way to the BBC.  The recording tells the story of our times. In it, a woman is talking about the virtues of free speech, even unpopular or impolite speech that challenges strict forms of Islam, when she is interrupted (cinematically) by the sound of gun shots. The last sound we hear is the clatter of chairs and shoes, the din of the free speech crowd fleeing for the exits.

The attack may have been the handiwork of a “lone wolf,” but it is part of larger, more frightening pattern. Last month in Paris, a different set of “lone wolves”attacked the same symbolic targets: vocal defenders of free speech and the Jewish community. That’s what the Charlie Hebdo and kosher supermarket attacks in Paris have in common with the free-speech conference and Jewish community center in Copenhagen. This is frightening because nearly every major city in the world contains these symbolic targets, and because it suggests that “lone wolves” can be inspired by a contagious ideology that moves through the Internet.

Yes, we must balance our efforts to fight back with the values of freedom and privacy. But European and Arab nations should freely share information about airline passengers. Terrorism is transnational and threatens all countries, without exception. Absent such cooperation, which is largely lacking today, more innocents will die. It is time to be honest about the alleged violations of privacy involved. Why should airlines and government not share information that passengers freely provide to travel agents and online booking services?

There are other quaint restrictions on counterterrorism cooperation. Al Qaeda leaders live openly in Europe while their host countries too often refuse to hand them over because they are dual nationals. Take the case Mohamed El Guerbouzi, who used his London base to run a jihadist network in Morocco. Now he has moved to Iraq to plot his next attacks, perhaps against the very Britons that once gave him a passport and shelter. If Britain had turned over El Guerbouzi when it was in their power to do so, many lives could have been saved. Ah, say the civil libertarians, but that would have violated his “rights.”

These inconsistencies—between violating the legal rights of confessed terrorists and preserving the lives of the rights of peaceful noncombatants—are hotly debated in democratic societies. This debate is a hallmark of a prosperous society that has not had to choose between two competing goods for a very long time, and as a result has lost the ability to do so. In Morocco, where we are closer to the dark current of terrorism, we put innocent lives ahead of the legal rights of the people who describe themselves as our enemies and our killers. The West must make a similar, hard choice.

Why do some individuals become killing machines and blame their victims by citing the things they have drawn, said, published or prayed about?

Many of these “lone wolf” killers were born and raised in Europe, received a free education in European schools, free housing, free medical care and the freedom to worship as they chose. Some are even graduates of Europe’s finest universities and colleges. Then, they drift into the violent madness. You can’t blame radical preachers or recruiters. Most of them have been arrested across Europe, in France, Belgium, Germany, Britain and Spain. It is the Internet and social networks where they first meet, flirt and become seduced by radicalism.

Certainly, social integration through work and citizenship has kept many youngsters from going over to the dark side. It is worth remembering the roles of two Muslim men who tried to save lives in the Charlie Hebdo attacks. There was the first policeman to respond to the attacks on the cartoon magazine was a Muslim whose family hailed from Algeria. He joined the police because he believed in France, both as an ideal and as a reality. He came to rescue his fellow citizens and died on the sidewalk, with his hand outstretched begging for his live. The other Muslim who saved lives on that tragic day was from Mali. He, too, believed in France and was working in the stockroom of a kosher supermarket. He saved the lives of four Jewish individuals by hiding them in the downstairs freezer.

The call to jihad is ignored by virtually all Muslims, who are busy being productive parts of European society like the policeman and supermarket worker. We must reject the call of the sirens and respect all religions.

It is an ideology, not religion, that drives these murderous men.

It is true that Jews are too often the target of terrorist propaganda. Terrorists seek to divide and conquer so they seek to use the hateful and ancient tactic of blaming the Jews for the misfortunes of others.

That said, it would be a tragedy if Europe’s Jews took this moment to depart. "To all the Jews of France, all the Jews of Europe, I say: Israel is not only the place to which you turn to pray, the State of Israel is your home", said Israel’s prime minister in a speech following the attack in the kosher supermarket Porte de Vincennes, Paris. This Sunday, hours after the attack in Copenhagen and the desecration of a Jewish cemetery in Alsace, the Israeli leader reiterated his call to European Jews: "Israel is waiting for you with open arms."

Yet, if they go, the terrorists have won.

The best response is returning to the fundamental principles of inclusion, freedom and tolerance. We don’t need to malign one religion or encourage the followers of another to leave. Free societies can prevail by both trumpeting diversity and by not allowing terrorists to escape justice due to technicalities.

And Europe should not be too proud to learn from Africa.

In recent years, Morocco has achieved a breakthrough in sub-Saharan Africa.

The policies of Morocco’s King Mohammed VI are based on three pillars: support for the democratic process, partnership for human development and respect for cultural differences. In practice, this has meant championing and adopting a constitution that safeguards equal rights for women and religious minorities, funding infrastructure programs to foster hope and create jobs, and consciously creating legal space for different regional traditions to flourish peacefully.

But, most importantly, the king has waged an intellectual war against the radicals. He has a unique ability to do this. The king is both a secular leader who runs his nation’s military and diplomatic services, and a religious leader, known as Amir al-Mu'mineenor “Commander of the Faithful.” So it is natural for him to talk about Islamic law and custom.

This policy is working. The king has been active in neighboring Mali and Mauritania and both lands have seen a reduction of radical sermons in the mosques and a decline in terrorist recruitment.

No European leader has the standing (or the stomach) to engage the killers who speak in the name of Islam in this way. Perhaps Western Muslims should be invited to appear on French television to talk to the Muslims of Europe. Their message could save lives and salve a society on the brink of division.