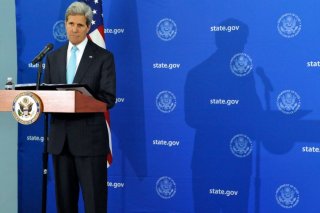 The least that can be said about the president’s strategy for dealing with the Islamic State as presented last week is that it is something. For far too long there has been no strategy at all. Now the president calls for a long-duration commitment to use force to defeat the world’s newest barbarians.

The president’s plan has merit. It relies on America’s vastly superior airpower to overwhelm the comparatively primitive might of the infant yet murderous Caliphate. Importantly, President Obama’s plan also relies on our local allies rather than American troops to provide the forces on the ground necessary for a successful mission.

That said, partnering with those ground forces, the president needs to be willing to take out high-value targets and kill large numbers of Islamic State (IS) combatants. This plan, while not convincingly workable, is the best the president seems able to commit to and deserves to be supported.

Many of my Republican colleagues are totally out of touch in their clamoring for the insertion of U.S. troops into the embattled region. Their criticism that U.S. troops were ever pulled out of Iraq and Afghanistan is not consistent with the suffering and dismay of the American people over the quagmire we’ve been in this last decade. The cliché that victory requires U.S. “boots on the ground” is anathema to the American people and is just not accurate.

It is correct that air power alone can’t win the day, but the troops on the ground don’t have to be ours. As one who helped develop the Reagan Doctrine and saw it work firsthand, I can attest to this. The most powerful weapon unleashed against the Soviet Union was our support for local insurgents, not our deployments of American troops.

In the post-Reagan years, U.S. airpower coupled with local warriors on the ground pushed Afghanistan’s Taliban regime out of power. There were fewer than 200 Americans on the ground when the Taliban was driven from Kabul. Later American ground troops performed valiantly, but it was the Northern Alliance that broke the Taliban’s grip on power.

Likewise, in the Clinton years, armed Kosovars more than NATO troops pushed Serbian forces to give up their genocidal repression. Here too U.S. pilots, with few Americans on the ground, should take credit for much of the success. The Kosovo Liberation Army were carrying the fight in the fields below. We shouldn’t forget such successes.

President Obama’s laudable strategy, however, is incomplete and, I believe, may well be fatal to the success of the mission he has outlined. This may well prove fatal. What is missing is the non-military component, diplomatic and political, that insures that the dynamics needed to needed to destroy the enemy are in play. Further, the president needs to lay more stress on the word “destroy,” and less on “degrade.” All anti-IS players should be assured that Americans are confident of and committed to a total defeat of the evil force that threatens their region.

It is by no means clear that the administration is wisely sorting out the partners in these high-risk stakes. Such a failure kept us in Iraq for six years, yielding only a temporary victory accompanied by a tremendous loss of American blood and treasure. We accepted the essentially anti-American government of Nouri al-Maliki, giving the brush-off to our best friends in the region, the Kurds.

We wasted billions of dollars in military aid to the Iraqi army, which wilted as it faced the IS sweep, and reliably shortchanged the Kurds. Need we be reminded that only the Kurds in recent weeks helped us roll back some of those IS advances?

We need new thinking, of which our encrusted policymakers seem incapable. A new alliance structure can stabilize the Middle East and settle the world into more peaceful modes of living.

We should start by recognizing the sovereignty of Kurdistan in a manner that shores up pro-Western allies across the northernmost parts of Iraq. Indeed, new Kurdish territory may well include parts of what is now Syria.That would mean convincing Shi’ite Iraqis that the old regime is not coming back and that their future lies in acknowledging a free Kurdistan. This would create a bulwark of stability.

Just a year ago the Obama administration, with the encouragement of the McCain-Graham faction of my own party, was on the brink of war with Syria, having convicted the Assad regime of engaging in chemical warfare on unruly Syrians. Providence – and an unexpectedly agreeable Vladimir Putin – pulled us back from that brink.

But the Caliphate will not be defeated by U.S. airpower and dependence on the Kurds alone. The president appears to be supporting the arming and training of the so-called Free Syrian Army to introduce a second front in the battle. This decision is based on two assumptions: (1) It opposes IS and it (2) isn’t Assad.

That spurious reasoning could lead to disaster. We have simply not completed a necessary assessment of the Free Syrian Army’s aims, attitudes, and potential capabilities. All signs lead to the conclusion that, though a rival of IS, it shares the same fundamentalist, terror-wielding motives. Once again, an American government may be creating its own future enemies, or supporting those who will defect to its enemies.

Alternatively (not to say controversially), we should reassess our relations with two now-odious names: Assad and Putin. We should remember to seek out the enemies of our enemies.

Assad is a bloody brute, but his interests now lie more with the West than with any grotesque IS agenda. He is at least predictable, certainly more capable of making long-term deals with us than he is to survive victory by the insurgents he faces. He has in some degree protected Christians from genocidal attacks by these fanatical terrorists now running wild in that part of the world. Oddly, Bashir Assad and his Ba’athist regime now find themselves sharing interests with Israel.

As for Putin, he pulled President Obama’s chestnuts out of the Syrian fire a year ago, when using his influence to remove the chemical and biological weapons from the scene. Never mind his more recent anti-American rhetoric, he has repeatedly offered to join us in the battle against terrorism, which is clearly as much a threat to Russia as to the United States. We must let Ukraine rest, its leaders sorting out its destiny with Moscow, while we find common but limited cause with Putin.

Such an imaginative approach could both bring stability to the Middle East and pull us back from a more treacherous brink, the prospect of a new Cold War. Maybe fighting against a common enemy will put us back on a path of cooperation, not confrontation. That alone is a worthwhile objective.

Putin could facilitate a rapprochement with Assad, whose military forces could be a determinative factor in the defeat of the IS.

A protracted effort to degrade IS can only degrade the U.S. We must join with others who share a common interest to defeat and destroy, not degrade and destroy, these barbarians who are at war with the Western world. Let’s join with whomever we have to get the job done.