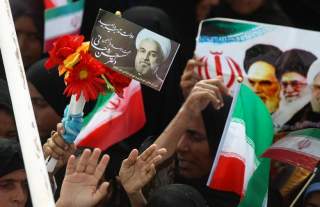 IT WAS LONG PAST MIDNIGHT IN GENEVA last November when the rumors began to fly. Iran and the world powers had just reached a deal on its nuclear program. An international crisis that had been building toward what seemed like war for more than a decade was now on the path to resolution. The deal, a haggard John Kerry confirmed, was real. It wasn’t comprehensive—Iran would still be heavily sanctioned and heavily centrifuged—but it was unprecedented. All prior efforts had fallen apart. Now the two sides had agreed to initial trust-building measures, had outlined the terms of a final deal and had made plans to work toward it. And what allowed the deal to happen was equally important—a glimmer of rapprochement between Iran and the United States, whose mutual distrust and occasional enmity is the root of the nuclear issue.

No sooner had the deal been reached than Israeli prime minister Benjamin Netanyahu denounced it as a snare and a delusion. Similarly, a chorus of American neoconservatives insisted that the Obama administration had cut a lousy deal. “Abject Surrender by the United States” was the headline on former ambassador John Bolton’s story the next day at the Weekly Standard. The surrender, said Bolton, was that under the deal, “Iran retains its full capacity to enrich uranium, thus abandoning a decade of Western insistence and Security Council resolutions that Iran stop all uranium-enrichment activities.” William Kristol announced, “The American people won’t be able to repeal Iran’s nuclear weapons once Iran has them. That’s why serious people, in Congress and outside, will do their utmost to expose and scuttle Obama’s bad Iran deal.” And writing in the Wall Street Journal, Bret Stephens did Bolton and Kristol one better. He didn’t say the deal was as bad as the 1938 Munich agreement. He said it was even worse.

Such overwrought piffle exposes the weakness of the neocon case. For the truth is that the deal does not amount to surrender. It will not lead to regime change or other utopian goals. It represents something more plausible—an armed truce that is in the interest of both Iran and the United States and that could lead to a broader détente between the two nations.

HERE’S WHY THE AGREEMENT’S CRITICS have it wrong. While Iran’s gains may have defied Security Council measures and worked around international sanctions, in pragmatic terms the limits on Iran’s nuclear program were being set in Tehran. Fearing war and deeper international cooperation against it, Iran had converted some of its stockpile of 19.75 percent enriched uranium into fuel plates. The challenge of converting them back added time to any rush for bomb-grade uranium. Yet it continued to install new centrifuges and expand its stockpile of 3.5 percent enriched uranium. Both would be useful in a nuclear breakout. Iranian officials regularly declared their intentions to vastly expand parts of the nuclear program in the future. And at times, they even suggested they would build nuclear submarines or other nuclear-powered vessels, which would allow them, under the cover of international law, to enrich uranium to bomb grade. In short, while international law had given us firmer ground from which to oppose Iran’s nuclear advances, it was doing little to arrest them. The time had clearly come for other steps.

Sanctions have been one of those other steps. It is difficult to see why Iran’s rulers would negotiate seriously with the West without being made to pay some genuine cost. They tend to agree that the international measures against Iran are illegitimate and rooted in double standards. Supreme Leader Ali Khamenei, in particular, has long been skeptical of America’s intentions and honesty.

The United States has had some sanctions measures against Iran in force for decades. They were not producing results until, under Mahmoud Ahmadinejad, Iran’s tough rhetoric and continued nuclear gains induced other countries to join in the sanctions regime. One of the broadest sanctions coalitions in history formed. These forces combined with Ahmadinejad’s gross mismanagement to produce severe turmoil in the Iranian economy, including, at one point, a monthly inflation rate above 60 percent. Things were so bad that the Atlantic’s Graeme Wood took a “hyperinflation vacation” to Iran’s Kish Island resorts, his hard currency granting him access to luxuries usually out of reach. And he wasn’t alone; as he wrote, his flight from the United Arab Emirates was packed with

Filipinas on leave from jobs in Dubai. Kish, they told me, had emerged as a preferred holiday destination for those too poor to go all the way home to the Philippines. After just a short flight, they could live like queens for a week, having toiled as scullery maids for a year or more without vacation.

The economic troubles were undeniably linked to the nuclear situation—the rial would swing wildly when negotiations were in session. The arrival of the new government of Hassan Rouhani restored competence to Iran’s economic administration, but conditions remain urgent. Rouhani’s stated goal is to reduce inflation to a still-blistering 25 percent by early 2015; one of his close advisers said that he “doubt[s] that in the next four years the . . . inflation rate will fall to less than 10 percent.”

Problems like these have prompted Iran to bargain more seriously with the West. Yet the key to the sanctions’ effectiveness had been the broad coalition backing them. Forming that coalition had taken a big push by the United States. It is hard for many countries, especially those with struggling economies, to resist the pull of one of the Middle East’s largest markets. If Washington doesn’t appear to be negotiating seriously, the sanctions regime could crumble.

MANY CAPITALS WOULD HAVE SEEN A REFUSAL of the initial deal signed last November—the Joint Plan of Action—as just such a failure to negotiate seriously. For all its flaws, the Joint Plan represents a path to a livable final arrangement.

In the short term, the most important concession won from Iran is the reduction of its stocks of uranium enriched to nearly 20 percent purity. This stockpile posed the greatest risk of a quick nuclear breakout. Uranium needs to be enriched to more than 90 percent purity to make a usable nuclear bomb, but it takes far more work to enrich a unit of natural uranium to 20 percent than to take it from 20 percent to weapons grade. This is the principle behind Netanyahu’s famous bomb diagram, shown to the world in his September 2012 address to the United Nations General Assembly. It’s also the reason Iran was converting some of its 20 percent stockpile into fuel plates—it knew that a big stockpile would be a rallying point against Tehran. As Ploughshares Fund head Joseph Cirincione put it to the Washington Post, reducing the stockpile under the Joint Plan has “drain[ed] the uranium from Mr. Netanyahu’s bomb.” By taking the most urgent concern off the table, the interim agreement buys time for negotiation and reduces the risk of miscalculation on either side.

Similarly, expansions under way at Iran’s enrichment facilities and at the unfinished heavy-water reactor at Arak (potentially a key element in a plutonium-based approach to a bomb) are now effectively paused, halting an alarming trend. And inspections of Iran’s facilities are now more rigorous and extensive, which will provide a clearer picture of the threat and a greater chance of detection in the event of an attempted breakout. The concessions made on sanctions, while significant, appear to be worth the price of these gains, and certainly so if they lead to a final deal.

The final deal outlined in the Joint Plan of Action represents a further improvement. The parties have agreed that a final deal will include Iran’s ratification of an Additional Protocol agreement with the IAEA, which would give inspectors a clearer picture of Iran’s activities. Getting Iran on board with the Additional Protocol has long been a key American goal. Iran would also “fully resolve concerns related to the reactor at Arak,” and agree not to reprocess spent nuclear fuel or build facilities that can do so. This would block the plutonium path to a bomb.

What’s the cost for a final deal? It would further legitimize the elements of the nuclear program that Iran constructed illegitimately, as discussed above, and Iran would get to keep some capabilities that, all other things being equal, we’d not want them to have. We’d also “comprehensively lift [all] nuclear-related sanctions,” dismantling the impressive structure we’ve built and giving Iran a clearer path to economic strength. Yet the whole point of those sanctions was to push Iran to make a deal on the nuclear program, so it would be strange to keep them in place after making the deal. And we would be able to keep in place the range of sanctions we’ve applied to Iran over concerns about terrorism and human rights—these are, after all, not “nuclear-related sanctions.” Agreeing to that in the Joint Plan was a concession by the Iranians, who had previously insisted that all sanctions would have to be lifted in the nuclear deal. Lifting the human-rights and terror sanctions in order to resolve concerns about the nuclear program would have been an extremely tough sell at home—rightly so—and would have sent a dangerous message to other states that America has targeted over human-rights concerns: namely, that by making yourself dangerous you can force concessions in other areas.