Defense Production Act: Expert Explains What It Is (And How it Can Fight Coronavirus) 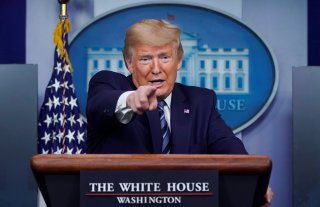 Until a month ago, the Defense Production Act (DPA) was just an arcane piece of legislation, typically associated with the Cold War. Mention it, and all you would have gotten was a blank stare or a yawn.

What a difference 30 days makes. Congressmen and senators now speak of the act daily. It’s discussed on the front pages of the New York Times and other major media.  Many stories take a sensationalist turn, demanding why the administration has not been faster and more vigorous in its use of the authorities in the DPA.

The Defense Production Act first came into being in 1950 as the Truman administration realized it needed more authorities to mobilize the industrial base to fight the Korean War. The act has been re-authorized by Congress some 50 times since then, undergoing significant revision along the way.

The revisions made took basic two forms. Authorities no longer needed—such as those dealing with requisitioning, rationing, wage and price-fixing, and labor disputes—were dropped.

Other revisions have broadened the original narrow definition of national defense.  It now extends to such things as energy security, space security and national disasters.

Not all of this has been helpful. For example, using the umbrella of energy security and the DPA, President Obama funneled over $200 million into a bio-fuels initiative that ultimately went nowhere.

Of the seven original titles in the DPA, three remain—Titles I, III, and VII.  Here is a quick description to help understand what is taking place today with the COVID-19 crisis.

Title I broadly contains the priorities and allocation authorities. The priority authority allows the federal government to ensure the timely availability of critical materials and services produced in the private market in the interest of national defense, and to receive items through contracts before any other competing interest. The allocation authority gives the president the power to allocate or control the general distribution of materials, services, and facilities.

The Department of Defense is the most frequent user of Title I, using it to insert priority clauses into its contracts. These provisions requiring contractors to give the Pentagon preference over all other customers in delivering goods or services.

In 2018 the department did this over 300,000 times. The Pentagon used its highest rating to prioritize the delivery of Mine Resistant-Ambush Protected (MRAP) vehicles for the Iraq War, as well as to obtain body armor for troops. The other federal departments use priority ratings much less. The Department of Homeland Security (DHS) used DPA-rated contracts only about 2,000 times in 2018, mostly for hurricane response.

So how is Title I is being used right now?

The president has delegated his DPA authorities to the appropriate cabinet secretaries. On March 18, he signed Executive Order 13909 delegating his priorities authority to the Secretary of Health and Human Services (HHS).  This marked what the president and the media referred to as “invoking the Defense Production Act.”

Five days later, President Trump signed Executive Order 13910 giving HHS the allocations authority under Title I to stop hoarding and price gouging for medical equipment and supplies.  This authority has already been used in at least one instance to seize hoarded masks and protective equipment.

In the following week, the White House started to get specific about how to wield these authorities. On March 27, the president issued a memorandum telling HHS Secretary Alex Azar to direct General Motors Company to accept and prioritize contracts for ventilator production. Then, on April 2, the president signed two additional memorandums: the first directing the 3M Company to ramp up N95 mask production; the other directing Azar to speed up delivery of component parts to the big manufacturers of ventilators.

That’s Title I. Now, let’s look at Title III. It allows the president to provide grants and loans to develop, maintain, and expand domestic production capacity for resources needed for national defense.

Again the Pentagon has been the most frequent user of these authorities, using them to provide money—typically in amounts less than $50 million—to companies to help shore up a recognized deficiency in the defense industrial base.  In the last year or two, the Defense Department has used Title III authority to help assure access to rare earths, explosives, and lithium seawater batteries.

In terms of recent activity using Title III authorities, the newly-enacted CARES Act appropriates an unprecedented $1 billion to the DPA. It’s anticipated that most of that funding will go to medical manufacturing, including for vaccines and therapeutics. The CARES act also removes certain limits on DPA funding and reporting requirements.

Just as the president delegated his Title I authorities, he also delegated his Title III authorities to his HHS and DHS secretaries. (DHS is involved because it controls FEMA, the Federal Emergency Management Agency.) Now, both departments can make direct investments in U.S. corporations to increase their capacity to manufacture medical supplies and equipment.

The final section of the DPA, Title VII, contains a grab bag of authorities. The one most pertinent today is probably the authority for the government to enter into voluntary arrangements with private companies.  Arrangements which, in normal circumstances, might look like sole-source contract awards, are thus permissible using Title VII. For example, companies have approached the White House offering to make goods such as N95 respirators. Normally such transactions must be openly competed and competitively awarded. Title VII authorities provide for exceptions.

So, that’s the DPA in a nutshell: Title I—priorities and allocation authorities; Title III—direct investments, and Title VII—voluntary agreements. Now, let’s look at two claims being made that don’t hold up under scrutiny.

Claim 1:  The Federal government is not using the DPA.

Wrong. As we’ve seen, the administration is actively using its DPA authorities, It’s likely that every one of the thousands of contracts being issued by the Defense Department and FEMA to fight the COVID-19 emergency have a DPA Title I rating. And now that the federal government has developed a better understanding of the situation, General Motors has been directed to produce ventilators, 3M to make respirators, and ventilator parts suppliers to make more. Additional use of DPA authorities is likely in the coming weeks.

Claim 2.  Using the DPA will get faster or better results.

Planned economies, where a central authority dictates production rates, quantities, and types of goods, typically perform less effectively than market-based economies. The U.S. economy is immense and diverse. Spread throughout all 50 states and our more than 3,000 counties and parishes are private businesses with capabilities and innovative ideas largely unknown in Washington, D.C.

Over the last two weeks, we have seen companies like Ford and Toyota volunteer to partner with medical companies to make ventilators; Honeywell, 3M, Mypillow, Hanes, and others to make millions of N95 masks; and Anheuser Busch, Baccardi, and scores of boutique distillers to make hand sanitizer. The list goes on and on. No central office dictating orders from Washington could ever do a better job of mobilizing U.S. industry.

For whatever reason, the White House chose to make an example of General Motors and, early on, publicly directed them to start making ventilators. That shows the administration will not hesitate to use the power of the DPA when they believe it will make a difference.  It certainly sent a message to industry, that they don’t want to be the next GM.

The DPA is a powerful tool to be employed to protect the nation. The administration was right to deploy its authorities. Now that the nation’s industries are responding to the crisis, the best use of the DPA is as surgical tool for specific issues and as leverage to prompt best behavior and information sharing.