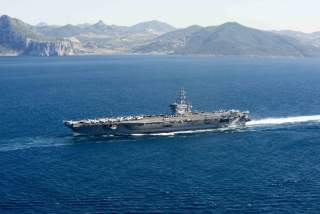 While Washington is building a security network in the Asia-Pacific, the Obama Administration is taking pains to transmit the message that it is not trying to exclude Beijing. In fact, the United States wants China to join the American-led liberal-institutional world order as Beijing emerges as a global power.

“This Asia-Pacific security network is not aimed at any particular country. The network is not closed and excludes no one,” Defense Secretary Ashton Carter told an audience at the Center for a New American Security’s annual conference in Washington on June 20. “While we have disagreements with China, especially over its destabilizing behavior in the South China Sea, we are committed to working with them and to persuade them to avoid self-isolation.”

That is one reason the Pentagon continues to press for stronger bilateral military-to-military relationships with the Chinese People’s Liberation Army. Carter said that as a part of that continuing effort, the U.S. Navy will once again host the People’s Liberation Army Navy in this year’s Rim of the Pacific (RIMPAC) exercises in Hawaii this summer.

However, while the United States certainly gives the impression that is willing peacefully to integrate China into the American-led world order, it is not clear if Beijing is willing to accept the current system. Many—like noted realist scholar John Mearsheimer—believe that China will attempt to dominate Asia just like how the United States maintains a regional hegemony over the Western hemisphere. Indeed, in many ways, Chinese actions in the South China Sea seem to echo the United States’ 1823 Monroe Doctrine.

Mearsheimer argues that Washington will fight tooth and nail to prevent the emergence of another regional hegemon. The United States has acted as a spoiler every other time another potential regional hegemon has emerged—such as Imperial Germany or the Soviet Union.

“My argument in a nutshell is that if China continues to grow economically, it will attempt to dominate Asia the way the United States dominates the Western Hemisphere. The United States, however, will go to enormous lengths to prevent China from achieving regional hegemony,” Mearsheimer wrote for The National Interest. “Most of Beijing’s neighbors, including India, Japan, Singapore, South Korea, Russia, and Vietnam, will join with the United States to contain Chinese power. The result will be an intense security competition with considerable potential for war. In short, China’s rise is unlikely to be tranquil.”

Essentially, Washington is holding out the olive branch in the hopes that China will accept the current order without challenging American dominance. But if it doesn’t, Beijing will find itself facing off against Carter’s Asia-Pacific security network.

“The bottom line is that the United States worked hard for over a century to gain hegemony in the Western Hemisphere, and it did so for sound strategic reasons,” Mearsheimer wrote. “After achieving regional dominance, it has worked equally hard to keep other great powers from controlling either Asia or Europe.”