A Delicate Atomic Dance: Managing the Aftermath of the Iran Nuclear Talks 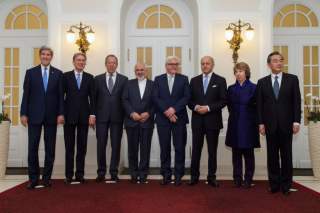 With the agreement in Vienna between Iran and the P5+1 on an extension of the negotiations over Iran’s nuclear program, policy makers will now have to turn to the equally challenging and important task of managing the aftermath. From this point forward, American and Iranian negotiators will have to double down not only on negotiations with each other, but also on winning, and sustaining, support from other constituencies that could make or break prospects for nuclear diplomacy. Specifically, negotiators will have to sell the outcome to four groups: (1) the U.S. Congress; (2) Iranian hardliners; (3) nervous allies—most notably Israel and Saudi Arabia; and (4) the countries negotiating alongside the United States (together, the P5+1)—especially Russia and China.

Achieving success in nuclear diplomacy will require a very difficult balancing act. Inevitably, every stakeholder will face some disappoints. Obama and Rouhani will be challenged to effectively reassure or outmaneuver other parties, while avoiding their core interests that, if violated, would motivate any of them to scuttle a deal. This will not be an easy task, but it will make all the difference between a possibility for eventual success in negotiations that prevents Iran from obtaining a nuclear weapon, and a collapse of the talks that leads to escalating confrontation and a possibility of war.

A Way Out for Congress

In Congress, political momentum for tough action on Iran is strong, particularly in the aftermath of Republican gains in the 2014 midterm elections. Many legislators are looking for ways to exercise authority as representatives of a co-equal branch of government and express disapproval over how the administration has handled negotiations. They are contemplating the passage of new sanctions in an effort to turn up the heat on Iran and compel major concessions. But this strategy could backfire, notwithstanding the pro-diplomacy intent of some of its backers. The open question is whether Congressional action will ultimately proceed and be responsible for derailing nuclear diplomacy.

The good news is that despite the tough words coming from the Hill, the legislative branch has historically been hesitant to take full responsibility for major foreign-policy issues. One need only go back to the aftermath of the 2006 midterm elections where Democrats successfully campaigned on ending the war in Iraq, only to stand by as the Bush administration implemented the surge.

Moreover, while there is a bipartisan imperative to do “something” on the Hill, there will likely be little desire, particularly from Democrats, for that “something” to be seen as sabotaging the president’s policies and undermining the best opportunity the United States has had for a diplomatic breakthrough with Iran in thirty-five years. Indeed, a November 19 Congressional letter signed by forty-three Republicans warning the president not to circumvent Congress in the event of a deal with Iran was more noteworthy not because of the forty-three members who signed it, but for the lack of any Democratic signatories.

The best outcome for nuclear diplomacy would be no new legislation at all as negotiations continue. Any legislation addressing Iran could fundamentally undermine a deal by shaking Iran’s confidence in President Obama’s ability to remove sanctions independently and act without censure by a hawkish Congress.

There is ample precedent for cooperation between Congress and the Obama administration on sanctions, and no reason it cannot happen again. At the end of 2011, Congress passed sanctions against the Central Bank of Iran, despite very strong initial objections from the Obama administration that such a move would overplay sanctions and undermine unity of the international coalition concerned with the Iranian nuclear program. Once it became clear that legislation was inevitable, the administration and Congress were able to work together through a combination of intensive negotiations, creative lawyering and effective implementation to create one of the most effective sanctions programs in history, cutting Iranian oil exports by half and playing a significant role in bringing the Iranians back to the negotiating table.

The only responsible legislation targeting Iran during the course of ongoing nuclear negotiations would call for the immediate imposition of sanctions on Iran if the president certifies to Congress that Iran has violated the terms of the interim agreement, the Joint Plan of Action (JPOA). It could also consider a new energy-exports policy that would allow U.S. oil to flow to the global market, cooling oil prices and increasing economic pressure on the Iranian regime. Such measures would give the Iranians extra motivation to not abandon extended talks and continue living up to their obligation to keep the nuclear program frozen. Also, it would allow the Obama administration to credibly tell its Iranian negotiating partners that no new sanctions have been added. To reassure allies, the legislation could pledge funding for robust inspections and monitoring of Iran’s nuclear program and new arms sales to Israel. However, all of these steps would ultimately involve flirting with disaster, as they could push Iran or other members of the P5+1 away from the talks. The best option now is for no new sanctions.

Just as President Obama will have to deal with Congress, in the aftermath of the Vienna talks, President Rouhani will have to manage his own very difficult politics. Rouhani will have to continue to vigorously defend the negotiations against hardline elements in the conservative clerical establishment and the Islamic Revolutionary Guard Corps, who have argued strongly against an agreement and lobbied Supreme Leader Ali Khamenei against Rouhani’s efforts, stating that an agreement would give up Iran’s nuclear rights and that the United States cannot be trusted.

The real key will be whether Rouhani can convince Khamenei to take further steps to try to close a deal in the months ahead. This is an open question. On the one hand, Khamenei has given Rouhani an opportunity to try to negotiate an agreement and asked his own supporters to not publicly criticize the negotiating team. However, Khamenei is also a hardline skeptic with deep suspicions of the West who has distanced himself and made clear that if this initiative fails, he will take little responsibility and the fault will fall entirely on President Rouhani and his team. In the event of a deal, the Supreme Leader will likely rule by consensus as he has traditionally done, taking the measure of the key power bases within the establishment before making a decision. Once he makes a decision, all of the other key factions in the government will fall in line behind him.

Rouhani’s other major challenge in the months ahead will be to maintain support from the Iranian public, which has given him the necessary leverage to hold off the hardliners. Rouhani’s election and his ability to generate public support and outmaneuver the hardliners has been based on the promise of a better place for Iran in the world, improved economic conditions and the removal of sanctions. The challenge for Rouhani will be to maintain this optimism and positive momentum in the face of an extension, instead of a full breakthrough.

Indeed, some of the economic improvement that Iran has experienced in the past six months has not come from the sanctions relief itself, but from improved consumer confidence and optimism associated with a potential deal and the Rouhani team’s more capable economic management. However, dropping oil prices could combine with reduced optimism about a deal to undermine this progress and endanger Rouhani’s credibility with the Iranian public.

The Obama administration will have to continue to assuage Israeli and Gulf partners concerns regarding Iran’s pursuit of a nuclear weapon. Strong Israeli opposition to an extension or an eventual agreement could lead Israeli officials to more aggressively lobby members of Congress to take steps that would undermine the Obama administration’s strategy. Anxiety from either the Israeli or Saudi side could lead to increasing regional tensions that could sour the environment and undermine an agreement.

Both the Israelis and the Saudis likely support an extension of talks as a better outcome than a deal, just as they did this past July. Both are much more concerned about prospects for a major breakthrough in the months ahead. For the Gulf countries, particularly Saudi Arabia, the biggest fear is that the United States and Iran will come to an agreement on the nuclear program that sells out the rest of Saudi Arabia’s regional interests and hurts its ability to compete in what they perceive as a Sunni-Shia competition with Iran.

For the Israelis, the most significant concern is that a comprehensive agreement on the nuclear program will leave Iran too close to a bomb. In that instance, and over time, especially after there is significant sanctions relief, monitoring will break down, Iran will resume its program and dash to a weapon, and there will no longer be an international consensus there to stop it.