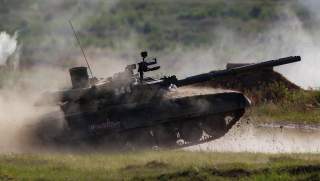 Top Russian commanders are becoming increasingly outspoken about how Russia might respond in the event of a confrontation with the United States or NATO. The Russian news agency TASS reported that Lt. General Viktor Poznikhir, First Deputy Chief of the Russian General Staff’s Main Operations Department, “warned the states, which now host or will host element of the U.S. missile shield, that these facilities will become priority targets for destruction.” Even more ominous was the message from former Chief of the General Staff Nikolai Makarov, who claimed that the United States was working to develop a first-strike capability which might force Russia to make a “decision about a preemptive use of force…in a period of heightened tension.”

Russia’s new military might, combined with its growing boldness, should be taken seriously. Russia’s posture reflects more than a confidence in its new hardware or a willingness to issue intimidating high-level warnings, but rather speaks to a major change in the Russian mindset. Russia has developed a new mode of nationalism accompanied by a genuine evolution not just in its attitude towards the West and the utility of military force as a policy instrument, but also about what Russia views as its core strategic interests.

Indeed, the situation has rarely been more perilous. The Putin administration claims to be unconcerned by the prospect of a nuclear arms-race with the United States, as it argues that the potency of its new weapons, most notably hypersonic ones, renders any potential American numerical advantage in its nuclear arsenal inconsequential and, more fundamentally, gives Russia the capability to overcome any missile defense system. Instead of confronting these issues, the American national security establishment is acting as though it does not have to even consider the possibility of engaging in meaningful diplomacy and as though Russia poses no imminent threat.

During perestroika and the early Boris Yeltsin years, Russia enthusiastically celebrated democratization, universal human values and its association with the West. No longer. Russia has once again embraced its traditional self-image: that of a national security state, surrounded by hostile nations, that takes pride in being feared rather than loved. Throughout history, Russia, despite its long-held pretense of being the “Third Rome,” has positioned itself not as a shining city on a hill, but rather a lonely, proud fortress prepared to do whatever is necessary to defend itself and its unique position in the world. Indeed, the Russian state’s recent trend of glorifying the Soviet victory in World War II reveals an increasingly prevalent feeling in Russia that the sacrifice of twenty-six million Soviet soldiers was not only necessary for the preservation of Russian civilization, but also demonstrates a genuine Russian exceptionalism in terms of its willingness to absorb a superhuman level of sacrifice. Something of this mindset was once captured by the great Russian poet and World War II veteran Bulat Okudzhava, who wrote with a combination of pride and sorrow about the attitude of Russian troops during the war:

The planet is burning and spinning/

We will settle for nothing but victory/

One victory for all, and no price is too high

According to Alexander Tsipko, a leading expert on Russian politics who was once considered something of an enlightened nationalist for viewing Moscow’s desire to become part of the West as a delusion, the country has undergone disturbing changes in its national political psyche. This shift was marked by the growing disillusionment with both the West and democracy that became prevalent during the end of the Yeltsin era after the bitter experience of Russia's economic demise and NATO’s intervention in Yugoslavia. Tsipko writes, “I agree with those who believe that it is the very national character that is to some extent the cause of the militarization of conscience.” He adds, “It is important to understand that militarization of conscience brings the killing of the instinct of self-preservation. It is not just expecting death, but creating a cult of death, making it sacred.”

AS A caveat to this, whatever you feel about Vladimir Putin and his willingness to break the rules of the international order and habitually deny all accusations of Russian misconduct, he has still acted as a cautious and calculating leader. Putin is not blindly militaristic, but always considers the consequences of his actions, even if he has not always managed to anticipate them correctly (as was the case with Russian interference in U.S. elections). While most Russians remain proud of their country’s takeover of Crimea, opinion polls show that these nationalistic sentiments are no longer a major organizing principle in Russian political thinking. Among both the elites and the Russian people, there is a growing sense of fatigue with the mounting costs of great power ambitions.

Nonetheless, Tsipko’s observations reveal much about how Russia might respond to a confrontation with America and its allies. If the survival of the country, dignity of the Russian civilization and, yes, legitimacy of the regime are at stake, Russia may be prepared to accept much higher risks and absorb much greater losses than would be acceptable to Western democracies.

Russia’s sense of isolation and victimhood are also rooted in an understanding of the collapse of the Soviet Union that differs wildly from the common Western narrative. Many Russians view their country as a modern equivalent of Weimar Germany, dismembered by victorious powers who are responsible for the economic catastrophe, human suffering and great humiliation of the Russian people. Most Russian citizens identify with Putin’s statement that, “the demise of the Soviet Union was the greatest geopolitical catastrophe of the century,” and believe that, “for the Russian people, it became a genuine tragedy. Tens of millions of our fellow citizens and countrymen found themselves beyond the fringes of Russian territory.” While neither Putin nor the majority of Russians view the recreation of the USSR as either feasible or desirable, the wounds of the Soviet collapse clearly remain quite fresh and continue to influence attitudes towards the West.

As toxic as the mindset of victimhood was to the people of Weimar Germany, the dangers posed by its reemergence in Russia may be even greater. While Germany was decisively defeated in World War I, there is a consensus in Russia that the USSR never suffered such a defeat in the Cold War. The Soviet Union never lost a war like the Germans or succumbed to anti-colonialist movements as the British, French and Spanish empires did. Instead, most Russians believe they had, on their own, cast off the bonds of the communist empire.

WHILE IT was Mikhail Gorbachev and the Soviet leadership who initiated perestroika and eventually oversaw the dismantling of the Soviet economic system, it was Boris Yeltsin and the leadership of what would eventually become the Russian Federation who helped accelerate the Soviet collapse. The Russian Federation first proclaimed its sovereignty from the Soviet Union on June 12, 1990, at a time when only two other states (Lithuania and Latvia) had announced their sovereignty. When hardliners in the Gorbachev government attempted to use military force against separatist Baltic leaders in early 1991, it was Yeltsin who declared his full support for Latvia and Lithuania and called upon all Russian citizens serving in the Soviet military to resist any orders to use force against the separatists.

When those same Soviet hardliners attempted a coup in Moscow in 1991 to remove Gorbachev and his reformers from power, it was also Yeltsin and his supporters who were instrumental in suppressing the rebellion. Meanwhile, with the exception of the Baltic republics and Georgia, who had also proclaimed their own sovereignty, the leaderships of most of the Soviet states sat on the fence waiting to see who would come out on top in Moscow. This was certainly true of the Ukrainian government led by longtime Communist Party functionary Leonid Kravchuk, who had a history of condemning Ukrainian nationalism and defending the communist system. It was Yeltsin’s victory in Moscow which paved the way for a meeting of Russian, Ukrainian and Belarussian leadership in Brest. There, without consulting the other republics, in violation of Soviet law, and without any serious negotiations about how the newly independent states would govern their relationships in the future, these leaders signed documents that, while vague and lacking in real legal power, clearly implied that the USSR would not disappear altogether, but would become a confederation where internal borders would be of uncertain importance. Accordingly, most in Russia did not view the collapse of the USSR as evidence of their weakness, but rather of their victory, entitling them to respect and even trust from Western governments.

A foretaste of Russian sensitivities was discernible in March 1994, when I traveled with Nixon to Moscow to meet Russian president Boris Yeltsin and his top officials. Our meeting had been cleared in advance with the Clinton administration. But Nixon’s private meetings with opposition leaders such as Alexsandr Rutskoi and Gennady Zyuganov prompted Yeltsin to erupt in fury, declaring that he was “deeply, personally offended” that Nixon would meet with opposition members. Yeltsin complained, “Let him know that Russia is a great country and you cannot play around with her like that.”