Democracies Beware: Russia and China are on the Offensive 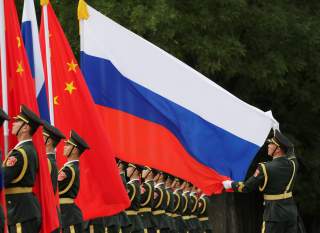 President Donald Trump has just signed a new bill to expand federal powers of the Committee on Foreign Investment in the United States (CFIUS) to investigate and block Chinese and other foreign investments on national-security grounds.

Earlier this month he signed the National Defense Authorization Act (NDAA) for 2019, which singles out Russia and China as America’s long-term competitors and includes a number of provisions on espionage and military containment. These, along with the latest round of State Department’s sanctions on Russia for poisonings in the UK, are all part of recent American efforts to come to grips with growing foreign interference in western democracies.

The White House’s new national-security strategy of December 2017 conceded that the U.S. ability to push back on China and Russia’s new offensive strategies is lagging. Moreover, with the exception of Australia, the West has been largely preoccupied with Russian influence, yet the Chinese Communist Party (CCP) has developed and expanded its own interference tactics, exploiting China’s growing economic clout and the Chinese diaspora.

To counter the intrusions of these revisionist authoritarian regimes, whose ambitions have grown in the last fifteen years, democratic states around the world will need to look to new strategies to defend their open democracies and digitalized societies. But first they must learn to discern the similarities and differences between Chinese- and Russian-influence campaigns.

Their similarities stem from their deep roots in the history of the Leninist party, their “united front” work stretching back to the 1920s, and their use of diaspora and economic influence. Russia counts some thirty million Russian-speakers outside its borders mostly in countries of the former Soviet Union but also in Germany (estimated one to four million), Israel (1.3 million) and the United States (nine hundred thousand). In Ukraine, Georgia and Moldova, Russia has used some of its Russian speakers as a pretext for land-grabs and sowing separatism.

The Chinese diaspora numbers about fifty million people of Chinese descent living in countries such as Australia (1.2 million), Canada (1.8 million), and throughout most of southeast and northeast Asia, while Chinese-Americans approach five million.

The enormous growth of China’s economic power over the last ten to fifteen years has given the CCP a massive boost in confidence leading to audacious attempts to win friends and suppress adversaries among its diaspora and cultivate foreign political and economic elites. These have both exploited and undermined democratic practices in the West.

When it comes to influence tactics, the vital difference between Russia’s GDP ($1.5 trillion in 2017) is about a tenth of China’s ($12 trillion, which is approaching that of the U.S. ($19 trillion).

Putin’s Russia has been punching above its weight globally, partly because it is willing to mobilize its limited resources to that end (gas exports, propaganda, spying and cyber capabilities) and partly because of its nuclear weapons and history as a great power. Because of its vulnerable economy, the US and the EU can pursue sanctions against Russia to constrain its energy and industrial sector. The latest round of US State Department sanctions on Russia for the Skripal nerve agent attack in the UK effective on August 22 and the new Senate bill proposing tougher Russian sanctions for continued meddling in the US elections aim to do just that. However, similar economic containment would be more difficult to pursue with China, pace President Trump’s tariff war.

Strategies to rein in the Kremlin and Beijing must recognize that both authoritarian leaders enjoy wide public support, not least because of the desire to exert influence in the wider world as great powers and “civilizational states”—one a vain attempt to revive past glories, the other to acquire global influence commensurate with its economic status.

The passing of the Foreign Investment Risk Review Modernization Act, which would expand of the jurisdiction of the CFIUS, could become a significant tool for the United States and a model for Europeans in the hybrid economic-warfare space. While the revised CFIUS focuses on China and the transfer of intellectual property and technology, its framework should also be applied to Russian investments in the United States, such as the Gazprom Marketing and Trading in Houston.

Greater research and policy coordination is needed, and thus a global center for countering hybrid threats should be established in the United States. The State Department’s Global Engagement Center is a good start, but for now it focuses largely on disinformation. The European Center of Excellence for Countering Hybrid Threats, established in Helsinki by EU and NATO member states, is another example, but its scope should be broadened to include China’s practices.

The United States and Europe could learn from Australia’s new foreign-interference law, which was passed in June. The law criminalizes novel methods of foreign influence and espionage operations mainly emanating from China. Laws have expanded the definition of espionage beyond conventional forms of spying to cover practices such as a foreign-state organizing actions to close down legal protests by its critics and interference by its proxies in democratic elections.

Regulation and transparency of cross-border financial flows are increasingly a national-security threat as well as a criminal one. The U.S. Treasury Department’s Financial Crimes Enforcement Network needs much larger enforcement capability.

Responses to Russian export of corruption and money laundering should also be applied to Chinese economic influence.

With Xi Jinping now potentially president for life and Vladimir Putin just re-elected for his fourth presidential term, their agendas will outlast the strategies of any Western leaders. Long-term thinking is needed in Washington, Brussels, Canberra, and beyond to shield democratic values from the new authoritarianism in the globalizing, digital world.

For the world’s democracies, a new era of political warfare has dawned. Innovative defense strategies are urgently needed.

Image: A military officer adjusts a Russian flag ahead of a welcome ceremony hosted by Chinese President Xi Jinping for Russian President Vladimir Putin outside the Great Hall of the People in Beijing, China June 8, 2018. REUTERS/Jason Lee