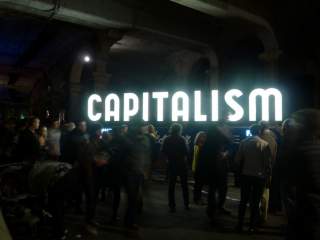 Editor’s Note: The following is an excerpt from Scott MacDonald and Jonathan Lemco’s new book State Capitalism’s Uncertain Future. It is republished with permission.

For economic policymakers, business managers, and citizens, the shifts in the global system since 2008, in particular the rivalry between two broadly defined political-economic models, are impinging on day-to-day reality. It becomes even more daunting when other factors are added: Islamic terrorism, continent-crossing disease like Ebola, longstanding border disputes, a surplus of available weapons in places like Africa, and climate change, with major swings in the weather. For the average citizen, this translates into employment, health, and lifestyle issues. Is public transportation safe? Does a political struggle elsewhere end up being fought in their neighborhood shopping mall? Is it safe to fly during the holidays, or is a bomb likely to go off? Do pollution problems elsewhere end up affecting the local weather or result in flooding of coastal areas? Does another government’s support for the local state-owned company translate into the loss of a job elsewhere by someone working for a private sector company? As the public grapples with these issues, so do economic policymakers, seeking to find solutions. In turn, finding solutions has its own set of political considerations that can determine the economic outcome. When people are angry, they are more likely to vote against those sitting in office.

For many large multinational companies that have benefited from globalization, increasing revenues and profits have come hand-in-hand with greater risk factors. Many management teams in the past have opted to ignore political risks or not put their companies into those markets. In this they have either exposed their companies to greater risk or missed substantial opportunities for growth—which means the generation of jobs. However, being in business today has exposed companies to wars, expropriation, and abrogation of contractual obligations, including debt repayment. We must add that this is not just a problem for private sector companies, but hits at many state-owned companies active in foreign markets.

Major private sector companies must enhance their ability to identify political risk. This entails a commitment to having the right people or groups in place to screen and interpret considerable data and correctly measure the nature of particular geopolitical risks. This is not just a matter of understanding politics and economics, but also of being able to assess the strategic challenge of a competitive business coming from an autocratic state capitalist company. Questions that need to be answered include what level of support is given to the company by its government, what access to credit the company has, including the ability to tap government banks and sovereign wealth funds, and how competitive the products are that such companies offer. This takes a combination of political science, economics, and business acumen, particularly credit analysis. As for the last, data necessary includes how revenues are generated, how debt is managed, and how management is selected. Equally significant is how transparent the company is in its financial statements and how willing it is to disclose that data. Investing in foreign markets therefore embraces an approach of the macroeconomic, political, and business environments. For doing business in autocratic states, the added risk is that the rule of law can be selective and regulatory enforcement targeted.

Companies conducting business overseas or competing with foreign companies in their own markets face a world driven by tectonic changes. Russia’s actions against Ukraine leap out in this regard, considering the adoption of sanctions by both sides against businesses. The major change was that Russia pushed back against what it perceived as the relentless Western advance in its traditional sphere of influence. This was played out between European, American, Ukrainian, and Russian governments, but as the Eastern Crisis became an extended affair, it was businesses in all of these countries that ended up on the firing line: losing sales and being forced to close down operations and seek new customers to make up for the loss of old business. Also affected by these measures are people: the workers who depend on salaries to feed their families and pay their rent or mortgages. The risk is that while policymakers wrestle, it is the citizens that are hurt.

Sadly, the geopolitical and economic changes are not going to fade away; they are more likely to expand in number and become more complex in nature. It is often said that the world has become a smaller place, but it is equally true that problems seem to be getting bigger. A hard economic landing in China would be a global event, hitting everyone from the United States and Europe to most developing countries, in particular commodity exporters. China’s economic slowdown in 2013-2015 was accompanied by declines in a number of commodity markets. Similarly, an extended recession in the Russian economy is not a good thing for the global economy, in particular for Europe and its businesses. It would also be problematic for China, with which Russia has a growing trade and investment relationship. There are equally difficult questions concerning what would happen if Saudi Arabia’s government falls. Although 2014 observed a collapse in international oil prices, Saudi Arabia remains the swing state in global production, and any change in regime would have an impact felt from Tokyo and Seoul to Berlin and Caracas. This was indeed something that was closely watched as the Arab country changed monarchs in the middle of the Saudi campaign to maintain its market share in global oil exports in 2015.

It would be wrong to leave the outlook for competition between state capitalism and private sector capitalism on a dark and gloomy note. There are positives. Global trade continues to be a major factor in the intercourse between nations. Investment in other economies has not dried up; capital flows between Western democracies, with economies dominated by the private sector continuing to put money into autocratic state capitalist–dominated economies. China continues to invest in Europe and North America. This leaves some degree of hope for the future. The friction between competing models of development does not have to overcome mutual benefits.

To the above we must add that advances in technology continue. Indeed, they serve to maintain a degree of interdependence that remains critical for a world where both autocrats and democrats have a stake. Martin Wolf, writing for the International Monetary Fund, observed: “Technology will continue to drive integration. Soon, almost every adult and many children are likely to own a smart mobile device that offers instant access to all the information available on the World Wide Web. It will make the transmission of everything that can be digitized—information, finance, entertainment, and much else—essentially costless. An explosion of exchange is certain.” While this raises issues of control for autocratic states, it also hold out the possibility that the exchange of ideas can help in the managing of tectonic shifts in the global economy in the years ahead. It can also provide opportunities for businesses and people.

In the early twenty-first century, globalization will struggle to remain the dominant force. The headwinds against this have multiplied, the most significant being tensions between autocratic state capitalism and private sector–led economies with democratic systems of government. This was evident in the tensions between Russia and the West over Ukraine in 2014 and in Saudi Arabia’s oil campaign the same year. While cleavages between these two competing systems can be substantial, the framework for international relations is being increasingly pushed back into the realm of realpolitik and moving away from a Western-imposed political correctness that served to generate friction over a number of issues, ranging from gay rights, free speech, and religious freedom to pollution, climate change, and food security. Although the democratic West may believe that it has the moral high ground in this debate, there is considerable pushback from other parts of the world that do not accept many of these tenets as core beliefs.

The challenge ahead will be to find common ground between competing systems, to contain problems that may be highly disruptive to global trade and investment, and to preserve many of the gains derived from globalization. Attention will also need to be paid to political transition issues in autocratic states, with a view to political succession and, in extreme cases, regime change. These last can be highly disruptive affairs. The fact that many political transitions in autocratic states can be disruptive plays to the strengths of democratic capitalism, a factor that leaves us more confident over the long term about how political systems will evolve and the central significance of the private sector as the generator of wealth and income in the future. Without responsible governments, with checks and balances and some degree of transparency, it becomes easy to shift into crony capitalism and political decay, which often ends in a violent changing of the guard. At the same time, democratic capitalist countries need their own upheavals to rectify problems, including income disparity and political drift. This is going to be the challenge of the decades ahead: how to manage change and encourage innovation and the free flow of ideas. Along these lines, democratic capitalism will eventually triumph over autocratic state capitalism, as the former has a tendency to stress order and stability over ways to improve the status quo—even if some of the options are potentially disruptive in the short term. It was the American statesman Thomas Jefferson who asserted: “I hold that a little rebellion now and then is a good thing, and as necessary in the political world as storms in the physical.” The ability to generate those little rebellions now and then is the saving grace of democracy; autocratic states lack that option in their ultimate brittleness of control.