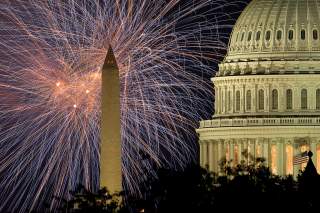 We cannot “make America great again” unless America is secure both at home and in its global position. But what does this have to do with democracy?

During the first decade after the 1991 fall of the Soviet Union, President George H. W. Bush’s goal of “a Europe whole and free” and a wider world largely at peace seemed within reach. The deadly threats of the Cold War were gone, and the democratic revolutions that appeared to be sweeping through eastern Europe and elsewhere created optimism as to the continuing progress of a liberal international order.

Now, two and a half decades later, that promising trend is being reversed. The authoritarian resurgence in Europe and elsewhere over the past decade has shaken our confidence that liberal democracy, free markets and peaceful borders will continue to dominate the post–Cold War international order.

From our being the “sole superpower” in the 1990s, U.S. global influence and effective power are now challenged by China and Russia, the weakening of the European Union and the sharp domestic divisions revealed by the U.S. presidential campaign. The United States and Europe are threatened by radical terrorists, challenged by territorially expansionist autocracies, and targeted by covert action, massive disinformation and propaganda offensives.

Russia and China, the world’s two principal autocratic powers, lead the way in consolidating their model domestically, but also in advocating internationally for an alternative authoritarian model based on strident nationalism, autocratic leadership, and repression of human rights and the rule of law. Russia, through its covert intervention in the U.S. election, military actions in Ukraine and support of right-wing populist forces in Europe, is working to undermine the system of liberal institutions, laws and behavioral norms that have bound Europe and the United States. Sadly, this alternative model is gaining ground in Europe and elsewhere. The list includes formerly promising new democracies such as Hungary, Turkey, Thailand, the Philippines—and now even Poland.

What is the connection between America’s security and the state of democracy in the world? Democratic countries rarely, if ever, go to war with each other or prey on their neighbors. Democratic systems and free markets support each other and sustain individual and group freedoms. Also, the rule of law, which subsumes all, is best guaranteed by democratic systems. Protection of the democratic order, now under challenge, must therefore be one of the priorities weighed in our strategic decisionmaking analysis and policy process. And democracy promotion via a revised, realistic and targeted approach must remain a fundamental national-security objective for the United States and its allies.

At a recent conference at the Woodrow Wilson International Center for Scholars in Washington, DC on this subject, eleven experts of varying political and operational perspectives all concluded that the national-security interests of the United States and its allies not only permit, but require, America to support democracy abroad. Not to do so would ignore an existential threat to democracies, and to the international order that has allowed the United States to remain secure and prosper.

The new administration will need a democracy-promotion strategy. We suggest a triage approach, which will concentrate on three categories of countries where external support is most likely to succeed. Excluded from these efforts will be countries like Russia and Uzbekistan, where the effort would be futile and/or discredit democracy promotion by validating regime propaganda that equates these programs with aggressive intrusion into domestic affairs.

The most promising cases are found in countries where autocratic regimes have recently fallen or have agreed to a negotiated transition (e.g., Tunisia, Ukraine, Myanmar and Indonesia) or where semi-autocratic governments are visibly weak and opposed by broad-based indigenous movements (Venezuela).

The second group is made up of countries undergoing democratic regression resulting from the aggressive nature and partial success of the authoritarian counteroffensive. Existing democracies such as Poland and Hungary must be helped from falling backwards. Emerging democracies such as Ukraine, Moldova and Georgia need assistance in fending off foreign attempts to subvert them.

The third group is comprised of nondemocratic countries that fall in between regimes transitioning to democracy and consolidated dictatorships. This category includes autocratic countries such as Armenia, Thailand and Belarus, where the regimes have retained some democratic trappings such as controlled elections to maintain a degree of popular legitimacy. These openings may be used to lay the groundwork for democratic transition through carefully calibrated democracy promotion programs.

Understandably, much of the focus of the new U.S. administration will be on countering terrorist threats and dampening the appeal of radical ideology to susceptible young people. Yet, we must pay attention to prospects for democratic transition and meet the authoritarian counteroffensive. At the same time, Americans must reaffirm their own democratic commitments and standards as they manage their economic divisions and challenges. If democracy is to continue to flourish, nothing is more important than being true to American values and principles and protecting them globally.

Image: Fourth of July at the U.S. Capitol. Flickr/Architect of the Capitol