Democracy Will Continue to Survive the World's Political Turmoil 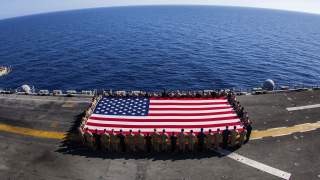 At the Cold War’s end, democracy appeared to be the last man standing. But since then, democracies have taken some casualties. The ranks are thinner.

But freedom isn’t finished yet. Established, successful democracies are once again starting to knit together—if only because dark forces are driving them together, leaving them no other option.

Bold prediction: In a decade, the world will be healthier place for freedom than it is now. Established democracies in North America, Europe and Asia are a big part of the reason why. This may not bring the end of history, but over the next few years we could definitely see the beginning of a brighter one.

Few would dispute that democracy is under assault. In 2017, Freedom House Index delivered one of its most pessimistic assessments of global trends. Four American post–Cold War presidents have tried to fashion grand strategy, burnishing the liberal world order with their version of democracy promotion. Arguably, none proved entirely successful.

Meanwhile, the forces for good are getting a run for their money. That is a particular challenge for the United States in the regions where American vital interests are most at risk—Europe, the Middle East and Asia. The Heritage Foundation’s Index of U.S. Military Strength grades threats to U.S. vital interests in these regions every year. The concerns are significant.

It is time to jettison failed strategies. America can’t coax states into the democratic column; it can’t make failed states “un-fail,” and it can’t build democratic nations from chaos. Instead, the United States needs to string together strong alliances of established free nations as a bastion of freedom—leaving others an opportunity to rally round our ramparts.

In the future, the line between free and unfree nations won’t be as stark as the graffiti-covered concrete walls and rusty razor wire that walled-off East Berlin from West Berlin. Globalization makes that impractical. The ability to transit the free and less free worlds with goods, services and ideas will remain, but travelers will know when they are strangers in a strange land. As this order takes hold the distinctions between parts of the world will become more, not less, noticeable.

There are three reasons why this just might work.

As an imperative of survival and the preservation of a free way of life, established democracies will band together. Not necessarily because they are democracies, but because they believe they need each other. Our strategies are pulling us together.

U.S.-India relations offer a clear illustration. India and the United States have been two of the world’s largest established democracies for decades. Yet, for most of that era their foreign policies have been as estranged as Brad and Angelina.

Now, however, momentum for an India-U.S. partnership seems unstoppable. What’s more, the impetus behind the progress seems truly bipartisan on both sides. Whether Trump or Clinton took the White House, Washington was going to seek to strengthen ties with Delhi. In India, the out-of-power Congress Party is just as committed to closer relations with the United States as the ruling BJP.

Few dispute the reason for the rapprochement. Both see a strategic partnership as key to managing their relationships with China.

The same case could be made for relations between Americans and Europeans. Despite Trump’s America First rhetoric and the rising nationalistic populism in Europe as well as America, there is more continuity than change in the strategic relationship. The United States has reaffirmed its unswerving commitment to NATO. The United States, Canada and Europe also share common concerns over instability in the Middle East, transnational Islamist terrorism and Russian meddling. At the end of the day, America needs a prosperous, free and stable Europe, and Europe needs a reliable American security partner.

Further, there are signs of other nations seeking closer ties with the United States to avoid getting sucked into unsavory orbits. In the Middle East, for example, members of the Gulf Cooperation Council are now looking to America to serve as a breakwater against Iran.

In Europe, take the case of Serbia. To hedge against being seen as nothing more than Putin’s puppet, the Serbian government has increasingly signaled it wants better relations with the United States. It also wants to keep the door open to EU membership.

In Asia, countries like Vietnam and Thailand are anxious for the United States to play a more active role in the region to balance Chinese influence.

Iran, China and Russia have all done their part to make more nations wistfully wish for the presence of more powerful democracies in their part of the world. Iran’s funding of state-sponsored terrorism, Russia’s nefarious disinformation and active measure campaigns, and China’s bullying and checkbook diplomacy have all antagonized others as much as it has advanced their interests.

Of course, the forces of darkness are banding together as well. But compared to the established democracies in the Western Hemisphere, Europe and Asia, they have far less to offer each other.

Nor would it be correct to presume that their interests sufficiently coincide that they represent greater threats when they try to work together. In the case of Russia and China, for example, respected China-watcher Dean Cheng points out: “Chinese and Russian leaders and their respective nations appear to be natural allies, but this is not necessarily so.” Further, by withdrawing into their own kind they only hasten the decline of their ability to compete over time, hamstrung by the corruption and autocracy that pervades their regimes.

For all its efforts to measure the fate of freedom in the world, one of the weaknesses of the 2017 Freedom House index is its obsession with identifying the rise of populism and nationalism as a significant threat to freedom. “With populist and nationalist forces making significant gains in democratic states,” the authors fret, “2016 marked the 11th consecutive year of decline in global freedom.” Yet, this finding seems more an opinion than data-driven conclusion. The nations with the most significant ten-year decline in freedom scores are plagued by much more than just populist or nationalist pressures. Likewise, look at the bottom fifty countries in the index—their problem isn’t populism either.

Here, the index reflects the Western elites’ intense and palatable anger over the rise of populism in the West. They hit the panic button after the electoral success of Trump and Brexit. Yet their anxiety receded following a succession of elections in the Netherlands, Austria and France, which is where populists failed to gain ground. At that point, European Commission chief Jean-Claude Juncker declared “the wind is back in Europe’s sails.” Then came the German elections, and populism once again looked like more of a head wind for the European project.

In part, the angst is understandable. The consensus over values and place of sovereignty in the management of human affairs has frayed. Transatlantic conversations are in a sorry state. I attended two major conferences in Europe that addressed the “threat” of populism, notable for the fact that there were no American or European populist or nationalist voices there to tell their side. Without question, there is a conversation among the family of the free that needs to be had.

That said, the all the anguish is a bit puzzling. The established democracies have weathered far worse. The United States, for example, has a history of successive waves of populist fever. Even in recent times, we have seen tougher times than these. The social unrest and counter-cultural forces of the 1960s made America a far more turbulent place than it is now. American politics were rubbed raw by Watergate. Arguably, even the 2007–08 financial crisis set Americans more on edge than they are now. Democracy should take a chill pill.

While some view populism as a sign of rot, others argue that it reflects the strength of established democracies and their ability to weather criticism. Populism is both the “canary in the mineshaft” demonstrating unease with the established order and a “pressure-valve” that allows for free expression, providing an alternative to more disruptive action. The established democracies are pretty resilient. A solid bet would be that they adopt and respond to current political whirlwinds.

Not only does the consent of the governed to be governed make established democracies more resilient, it makes them more competitive, more innovative and more adaptable. Democracy is a great competitive advantage for established democracies. That’s why countries struggle to become one. That determination is nowhere more apparent than in Central Europe where the preference remains to opt for the Western model over the Russian. In Asia, countries may want to do business with China, but few want to look like China. Even in the Middle East, winds of change are blowing among some of the most tradition-bound regimes, like Saudi Arabia. This may have less to do with embracing liberal values and more to do with looking for a competitive edge in an increasingly competitive globalized world, but interest or values aside—the world still recognizes the power that freedom can deliver in an established democracy.