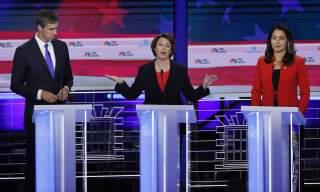 The candidates took different strategies once they finally made the debate stage. Warren, the only candidate last night consistently polling in the double digits, focused on constructing a unified brand and staying above the infighting of the lesser candidates. Klobuchar attempted to insert viral phrases into her speech (“I don’t think we should conduct foreign policy in our bathrobe at five in the morning,” “That’s what we call at home all foam and no beer”), which were not successful. Gabbard ignored her opening question about the wage gap and spoke about her military service as a way of introducing herself to the audience.

Health care and health insurance were given significance during the debate, with Warren and de Blasio coming out in favor of eliminating private health insurance companies. This distinction shows a push in the party from the original Obamacare debates of 2009–2010, and the former president’s promise that if you like your doctor you can keep your current plan. Delaney defended the ability of an individual to buy private insurance—one of the few authoritative statements he made without being cut off by moderators.

De Blasio interrupted and silenced O’Rourke on the insurance issue. It was not the only time he challenged the former congressman. When O’Rourke defended humanitarian military interventions and the concept of “responsibility to protect,” de Blasio reminded him about congressional war powers. The New York City mayor punched above his weight class, which would benefit him more if he didn’t start out with the highest unfavorability rating of the 2020 Democrats.

Attacks on O’Rourke also came from Castro, who suggested the former congressman should do his homework on immigration. Castro propounded the idea that the United States should decriminalize border-crossing. Under this plan, illegal aliens would only be committing a civil offense and not a criminal one, he said; Booker agreed, while O’Rourke did not. All three men spoke part of their answers in Spanish during the debate, a departure from President Donald Trump’s 2016 debate statement that “This is a country where we speak English, not Spanish.”

“Elizabeth Warren didn’t do anything to hurt herself and at least one snap poll I saw afterward gave her high marks,” observed James Antle, editor of The American Conservative. “But I really thought as the only top-tier candidate on that stage—a fact the moderators recognized with a lot of questions early on—she had the chance to do more and didn't really rise to the occasion. Still, I think people like that she can tie her emotional connection to the issues with actual policy details.”

When asked by moderators who was the biggest geopolitical threat to the United States, each candidate had an answer that showed their priorities and mindset. O’Rourke, Warren, and Castro said climate change. Booker said climate change and nuclear proliferation, while Gabbard left it at nuclear war. Delaney specified that nuclear weapons are the biggest threat to the United States, but the biggest challenge is China. Klobuchar also split her answer, saying that the biggest economic threat was China while the biggest military threat was the situation with Iran. Ryan kept his answer to China, while Inslee said the biggest threat is Donald Trump. De Blasio said Russia was the true threat “because they’re trying to undermine our democracy and they’ve been doing a damn good job of it and we need to stop them.”

The most combative segment came near the end of the debate on a question about Afghanistan. When Ryan said the United States needed to “stay engaged” in the country even if some Americans didn’t like that idea. Gabbard responded that “as a soldier, that answer is unacceptable. We have to bring our troops home from Afghanistan.” Gabbard challenged the idea that the U.S. occupation could uproot the Taliban, which is stronger than any time since the 2001 invasion. “When we weren’t in there, they started flying planes into our buildings,” responded Ryan, to which Gabbard corrected him and reminded the audience the United States was attacked by Al Qaeda on 9/11, not the Taliban. This forceful response lead to the Tulsi Gabbard being the most searched Democratic candidate according to Google Trends.

While President Trump tweeted during the debate “BORING!”, most political pundits reached the conclusion that it was a strong night for Castro, Booker, and Gabbard, Warren held her own, and O’Rourke back-slided.

“I wonder if tonight will be different because more top-tier candidates will be there,” asked Antle. “Let's face it, that first one was an undercard. Anything that doesn’t change the fundamentals of the race ultimately advantages Joe Biden.”