The Democratic Dream in the South Caucasus 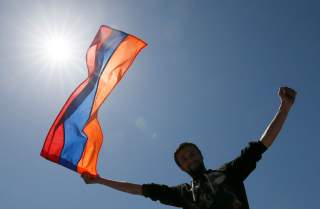 Democratic bright spots are emerging in Armenia and Georgia despite their being wedged between less-than-democratic regional powers—Iran, Russia and Turkey. Both countries seek to consolidate democratic gains and overcome poverty while managing daunting challenges from Russia and separatist conflicts. Even as the West keeps its primary focus on Russian aggression in Ukraine, it can encourage positive developments in the two South Caucasus countries.

The democratic revolution in Armenia and progress in Georgia run counter to prevailing views that around the world democracy is “under siege.” Armenia’s newly elected government, headed by Prime Minister Nikol Pashinyan, has wide backing and seems determined to fight corruption, enhance transparency, and restore popular faith in government.

Georgia has made steady progress toward building democracy as evidenced by successive parliamentary and presidential elections that have generally been praised by independent monitors. Last month, however, the final round of the presidential election was flawed. It was won by Salome Zourabichvili, a former Georgian foreign minister who ran as an independent but in effect was the standard bearer of the ruling Georgian Dream Party and its leader, Bidzina Ivanishvili. International monitors criticized the abuse of administrative resources, attacks on civil society organizations, and lack of a level playing field.

Georgia now has the first female president in any former Soviet country excluding the Baltics. The next great challenge for Georgian democracy will be conducting free and fair parliamentary elections in 2020.

Armenia’s delayed democratic gains have left it with some heavier burdens. The latest ranking in Transparency International’s Corruption Perceptions Index shows that forty-five countries are seen as less corrupt than Georgia, but 106 ranked better than Armenia. Likewise, in the latest World Bank Ease of Doing Business Index, only five countries outperform Georgia but forty do better than Armenia.

According to the World Bank, per capita gross domestic product in 2017 shows Armenia at about $3,940 and Georgia around $4,080. By comparison, the average for the three Baltic countries was over four times higher, reflecting their earlier and more profound reforms and the benefits of membership in the European Union.

Political factors also explain some of the economic weakness in Armenia and Georgia. Since intensive fighting in the early 1990s, Armenian military support for the Nagorno-Karabakh separatist region of Azerbaijan (and occupation of about 15 percent of Azerbaijan’s territory surrounding the region) has prompted Azerbaijan and Turkey to close their borders to Armenia and impose economic blockades. Russia’s support for separatists in Georgia’s separatist regions of Abkhazia and South Ossetia (and its 2008 invasion of the country) have led to the loss of control of both territories to Georgia for the foreseeable future. Transport links between the two regions and the rest of Georgia are cut, including the main railway from Russia to Georgia through Abkhazia and on to Armenia.

The preceding highlights the degree to which Russia looms large for both Armenia and Georgia.

Armenia has its own delicate dance with Russia. It hosts a Russian military base and has a defense treaty with Moscow. Russia also supplies military equipment, helping Armenia to offset oil-rich Azerbaijan’s vast arms purchases, many from Russia. Uncomfortable being seen as a Russian puppet, Armenia balances its foreign policy with Western ties, including a Comprehensive and Enhanced Partnership Agreement with the European Union.

So far Moscow has not intervened to stifle Armenia’s fledging democratic groundswell. Pashinyan has been careful to emphasize that treaty links with Russia remain firm and that his country’s economic orientation is still toward the Russian-led Eurasian Economic Union. The Kremlin has, however, expressed disquiet over corruption proceedings against former Armenian president Robert Kocharyan. Moscow does not want Armenia to move toward Georgia’s westward-leaning foreign policy arc.

Russia persists in subjecting Georgia to a propaganda onslaught. It alleges that the West will never accept Georgia into the EU and NATO, and that the country’s destiny lies with its fellow Orthodox northern neighbor with which it shares “traditional values.” Nonetheless, Georgia holds fast to its democratic goal and Euro-Atlantic orientation. With Russia preoccupied in Ukraine, the threat of renewed military action against Georgia may be reduced.

On January 19 in Baku, thousands demonstrated on behalf of jailed anticorruption blogger Mehman Huseynov and other political prisoners, raising a question whether democratic gains in Armenia and Georgia are having an influence in Azerbaijan.

Armenia and Georgia have a good deal of work to do to deepen reforms that will strengthen their democracies and improve living standards.

While pursuing these priorities, the countries deserve continued, strong Western support. Armenia and Georgia could become models for democratic development elsewhere in the wider region, and the South Caucasus is growing in importance as a strategic and energy crossroads between Europe, the Middle East, and Eurasia.

Denis Corboy was director of the Caucasus Policy Institute, King’s College London, and EU ambassador to Georgia and Armenia.

William Courtney is an adjunct senior fellow at the nonprofit, nonpartisan RAND Corporation, and was U.S. ambassador to Kazakhstan, Georgia and a U.S.-Soviet commission to implement the Threshold Test Ban Treaty.

Kenneth Yalowitz is an adjunct professor at Georgetown University and Global Fellow at the Wilson Center, and was U.S. ambassador to Belarus and Georgia.