The Democrats are Now Looking Elsewhere for Trump's Undoing 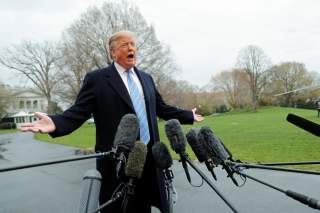 Less than two weeks after cries of “no collusion” rang out across the country, those who believe there is more to President Donald Trump’s dalliances with Russia than Attorney General William Barr let on are striking back.

Both the New York Times and the Washington Post came out with stories quoting anonymous members of special counsel Robert Mueller’s team suggesting the full Trump-Russia report is more damning of the president than the summary Barr presented in his letter to Congress, which is so far the only thing legislative leaders and the American public have seen. CNN reported that for “some investigators the letter did not adequately describe how the investigation of obstruction included derogatory information.” NBC News indicated that “some on the special counsel’s team say his findings paint a picture of a campaign whose members were manipulated by a sophisticated Russian intelligence operation.”

Oh, and former Trump lawyer and fixer Michael Cohen now says he has more information for Congress and investigators that they should get to see before he goes to jail.

Many an anonymously sourced Trump-Russia story has been reported only to fizzle out days or even hours later. Michael Tracey, a rare left-wing Russiagate skeptic, dubbed the latest news “one last hit from the RUSSIA BOMBSHELL crack pipe.” Even these stories don’t contradict the key finding of the Mueller probe as summarized by Barr: that there was no coordination or conspiracy between Russia and the Trump campaign to swing the 2016 presidential election.

Here we have shades of the Hillary Clinton email investigation. Some who participated in that probe were disappointed Clinton wasn’t charged and said as much, especially to the conservative press. Lisa Page, a key figure in the Trump-Russia investigation, later testified about anti-Hillary bias at the FBI. Others, however, were angry that then FBI Director James Comey revealed derogatory information about Clinton in the process of clearing her, hurting her politically without giving her an opportunity to defend herself in court.

Mueller undoubtedly faced similar dilemmas. Everything we know about him suggests he was unlikely to precipitate a constitutional crisis based on a close call, as the obstruction of justice question, at least, apparently was. (Though some would argue Mueller repeated Comey’s mistake, perhaps as an act of solidarity among former FBI chiefs, by declining to allege obstruction and then equivocating on whether that counted as exoneration.)

But if anything was a close call, that means that there will be arguments for a different prosecutorial judgment. Also, that means there were people involved in the investigation who would have preferred to throw the book at Trump, to the extent that Justice Department regulations allowed.

There is nothing in the policy forbidding the indictment of a sitting president to prevent the Mueller team from finding it more likely than not Trump committed obstruction or any other crime and letting Congress make the final call—assuming lawmakers see something close to the full report.

The odds are against Barr’s summary being misleading about the no-collusion bottom line. For all the charges brought and criminal convictions obtained that are held up as proof this was no mere witch hunt, Mueller did not indict anyone for conspiring with Russia to commit any hacking or election-related crime. He did not even attempt in any of his indictments to establish some greater Trump-Russia conspiracy existed or that any Russians engaged in election interference had witting American allies.

That does not mean, however, the report won’t be replete with examples of Trump and his campaign behaving inappropriately or incompetently in the face of Russian interference. The public record already includes several such examples, though if there was systemic coordination things like the Trump Tower meeting and Roger Stone’s WikiLeaks contacts would have been unnecessary.

But the Democrats, including Hillary Clinton, had higher hopes for Mueller’s handiwork than elaborating on what we could already read for ourselves in the papers. And the split between Democrats and Republicans on the House and Senate Intelligence Committees already showed it would take more than this to truly put Trump’s presidency at risk: there are some Democrats (though not, for now, House Speaker Nancy Pelosi) ready to impeach the president over things we knew pre-Mueller but no Republicans willing to convict on that basis.

If the Democrats can’t impeach Trump, then they can impeach Barr’s credibility as a narrator of what Mueller found, use that to push for as complete a release of the Mueller report as possible, and play up any negative material heading into an election year.

House Ways and Means Committee Chairman Richard Neal’s request for Trump’s tax returns shows Democrats aren’t done bedeviling Trump no matter how much or little bad news for the president is in the Mueller report. But it’s also a sign that it’s dawning on Democrats that they will have to look elsewhere for Trump’s undoing.